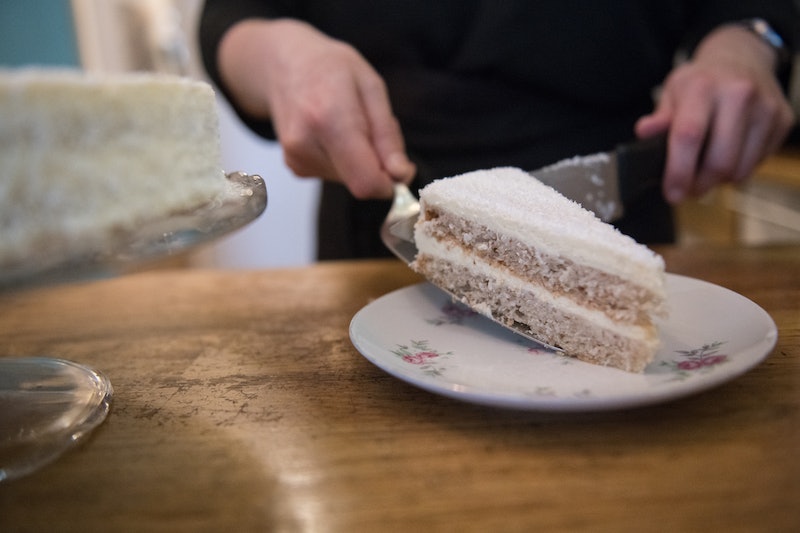 After learning this week about how to cut a cake to maximize freshness, we've been thinking about other ways to up our kitchen game. It's one of the strange things about adulthood that suddenly you're expected to be able to provide food for yourself; and unless you're willing to eat takeout and ramen for the rest of your life, that means cooking. Of course, some newly minted adults have been cooking for years, while others have yet to master the fine art of boiling water, but no matter where you might fall on this spectrum, the fact remains that cooking could always stand to be a little easier, a little more efficient, and a little less messy. If for no other reason than adults are also apparently expected to clean up after themselves, too.

But fortunately for us, there are all sorts of tips and tricks for making things easier in the kitchen. Which is good, because we can't all be Pinterest perfect. And so, in honor of our new cake-cutting knowledge, we've compiled some of our favorite food hacks to hopefully make the process of providing for your own meals that much easier.

It's all very well to understand the configuration that you're supposed to cut a cake in, but with lots of cakes, chunks of cake will get stuck to the knife blade and make a mess no matter what sorts of piece you try to cut. To avoid that problem, use a length of dental floss. Just stretch a piece taut and then use it to slice through cake, cheese, or other soft foods. It's less likely to clump, and even if it does, it's dental floss. Just throw one piece away and grab another one, preventing build up.

2. Remove Avocado Pits With a Knife

I learned this trick during my brief stint working at a deli. Trying to dig out avocado pits with a spoon usually wastes a bunch of delicious avocado that you'd much rather be eating. Instead, cut the avocado in half, then use a large knife (a short one won't provide the necessary leverage) and strike the heel of the blade into the pit. Then just twist the knife, and as long as the blade is buried about half a centimeter in, the pit should twist right out.

(Other avocado trick from the same deli: to properly spread avocado across a sandwich, first make a series of vertical slices in the avocado, then use a knife to scoop them out and spread them)

Chances are at some point you've been baking chocolate chip cookies only to discover that your brown sugar is as hard as a rock. If you want to soften it immediately, you can put it in the oven for a few minutes, just so long as you use it right away once it comes out.

The best way to make the sugar truly useable again, though is with a slice of bread. (Yeah, I didn't believe my mother either when she told me, but it's true). Just put the brown sugar and a slice (or two) of in an air-tight container and let it sit overnight. It should be soft again by morning.

Fried eggs are delicious, but trying to make them can prove very...tricky. So to avoid eggs that run all over your skillet, try making them in a mason jar lid. Chances are you have a few lying around. Just heat the ring part of the lid on your skillet, then pour the egg in and cook it like a normal friend egg. This trick is especially useful if you're making your own Egg McMuffins, and the best part is there's less clean up since your skillet doesn't get as messy.

Here you can see how it works using one of those fancy silicon egg rings, but the ring of a mason jar lid works just as well, and you don't have to buy anything new!

5. Open a Stuck Lid With a Rubber Band

Mason jar lids may have all sorts of uses, but they also have an annoying habit of getting stuck, like all other lids. There are lots of tricks for getting stubborn lids off, from running hot water over it to making your own jar opener, but the easiest and least messy way is probably using a rubber band. Stretch a rubber band around the rim of the lid, and it should provide enough friction to let you unscrew the lid without hurting your hand.

6. Use Chopsticks for Deep Frying – Or For Anything

Fried food is awesome — and the upside of having to cook for yourself is that you can cook whatever you want. But one of the annoying things about trying to use tongs while deep frying is that they tend to be made of metal, which heats up, and they often get grease everywhere. For a less messy, more reliable method, use chopsticks to move and remove whatever it is you're frying.

You have to get pretty good with chopsticks of course, but this is also a necessary adult skill (or at least it is in my world). Plus you can also use chopsticks for stirring anything that's on the stove since they don't scrape up your pots and pans like metal utensils do.

Here's someone who even uses them for making eggs.

But don't give those tongs away just yet; there's a whole other use for them: squeezing lemons. If you're making lemonade (which you should be, it's hot outside), you can fit the lemon between the tongs and squeeze in order to get every last drop of deliciously sour lemon juice out.

And while we're on the subject of repurposing kitchen items, don't get rid of that waffle maker you bought before you realized how messy waffles are. Instead, use it to make perfect hash browns with far less mess and fuss than frying them. Shred your potatoes just like normal until it's time to cook them, and then pop them in the waffle iron instead. The results are beautiful.

Now that it's summer and we're all craving ice cream, it's time for you to bust out this easy method of making ice cream sandwiches and impress all your friends with you ice cream know-how!

10. Use a Glass of Water When Microwaving Pizza

No one can cook for themselves all the time — there are days where you really just want to order a pizza, watch some Netflix, and peace out for the evening, and why shouldn't you? But when you go to microwave your leftovers the next day, you've probably noticed that the crust of the pizza gets hard and chewy. To avoid that, just place a glass of water in the microwave with the pizza, and the extra moisture keeps it from drying out.

Whether you love to cook or hate it, there is one thing we all can agree on about adulthood — alcohol is a definite perk of growing up. So as a general life hack, I recommend reliving your childhood making popsicles in the freezer, but this time whip up a batch that's alcoholic. Here are a few recipe suggestions, too.

And if you want them to include gummy bears, I recommend this recipe:

Or you could skip the popsicle part...