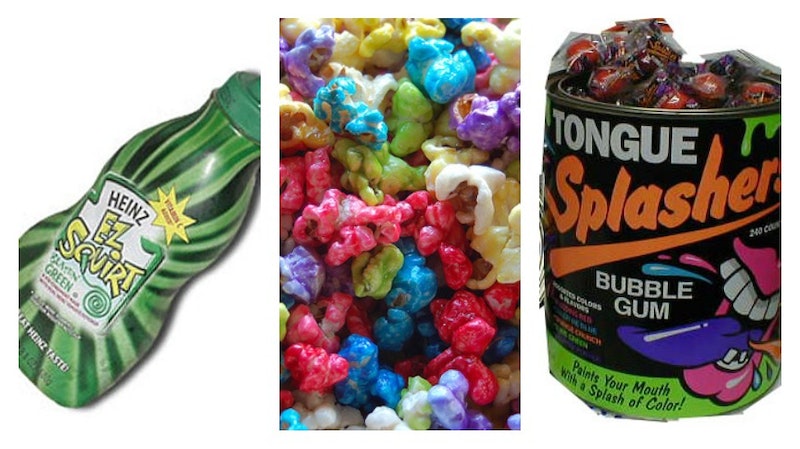 Food gimmicks may be old hat these days, but back in the ‘90s, grocery store shelves were just being stocked with the bizarre sorts of ideas companies dream up in the name of moving more product. Most of them, of course, were horribly unhealthy; as such, many of them have been discontinued for a good long while now. But if you’re the nostalgic type, you probably look back fondly on the age of foods that turned weird colors, transformed into something else, or otherwise spiced up mealtimes with a little dose of the unexpected. So, in honor of Throwback Thursday, let’s take a look at some of our favorites, shall we? Raise your hand if you remember these weird and wacky edibles!

A lot of ‘90s gimmick food focused on weird colors; 1991’s Pop Qwiz was Pop Secret’s take on the trend. The individual packets came in a variety of colors, ranging from green and blue to red and yellow — but the popcorn inside didn’t always match the color of its bag. I think my brother and I managed to convince our mom to get it for us just once; I hated popcorn (still do), but the gimmick was enough even to make me want to try it out. Who can resist food that’s also a game? P.S. It came back as Pop Secret Magic Colors around 2011, sooooo... there's that.

In an effort to make oatmeal more interesting for kids, Quaker created Dinosaur Eggs instant oatmeal in the late ‘90s. In the bowl, the dry oatmeal looked like… well, dry oatmeal, with the addition of a few randomly scattered “dinosaur eggs.” Once you added your water and microwaved the whole thing, though, those eggs hatched into little crunchy (read: candy) dinosaurs. Shortly thereafter, Quaker introduced a deep sea version, called Sea Adventure instant oatmeal, that had the added perk of turning your oatmeal blue in addition to hatching candy fish in its gooey depths. It’s tough to find Sea Adventure oatmeal these days, but the dinosaur is alive and well and likely living at your local grocery store.

Before Dinosaur Eggs, though, there was something else: Oatmeal Swirlers. If you weren’t alive in the ‘80s, you probably won’t remember it; General Mills launched it in the very early ‘90s, with the gimmick being that it included a little packet of strawberry or maple brown sugar goo for you to draw pictures on your oatmeal with. I didn’t like oatmeal any more than I liked popcorn (also still true), but again, I found the gimmick entertaining enough to try just once. Spoiler: It was gross.

I don’t know who thought that making ketchup green was a good idea, but apparently someone did, because Heinz EZ Squirt hit shelves nationwide in 2000. Although the ad above depicts the plain ol’ red variety, touting its unique spout instead of a weird color, the ketchup was available in shades ranging from purple to the aforementioned green. EZ Squirt struggled along for six years before being discontinued in 2006; today, it’s still remembered as one of Heinz’s biggest gaffes. Why did it fail? Let’s face it: No one wants their fries to look like an alien bled all over them.

Tongue Splashers wasn’t just a weird-colored gum; it was a gum that turned your tongue weird colors. It’s still around, too — just under a different name: You can get a huge tub of “Dubble Bubble Painterz” on Amazon for around 16 bucks. Blue Bunny’s Bomb Pop ice pops also has a flavor inspired by the tongue-painting gum.

I think Jell-O 1-2-3 wins the prize for being the oldest edible on this list; it debuted way back in 1969, only to be discontinued almost 30 years later in 1996. Unlike regular Jell-O, which turns into one jiggly layer of flavored gelatin after being mixed with hot water and refrigerated, Jell-O 1-2-3 magically separated itself out into three distinct layers: Plain ol’ Jell-O on the bottom, a mousse-like confection in the middle, and a layer of something resembling whipped cream on the top. I wasn’t able to find an old commercial for this one, but I did find a video that will teach you how to make it even without the fancy mix. Yum...? I think?

For some reason, everyone seems to have been convinced in the ‘90s that the easiest way to get kids to eat certain foods was to make them seem as much like candy as possible. Dannon’s take on the trend was Sprinkl’ins, a yogurt marketed towards children that included a package of sprinkles (or jimmys, depending on where you’re from) for kids to mix in with the goopy, sugar-laden mess. According to this rather extensive history of Dannon, they started test marketing Sprinkl’ins in 1992; although nutritionists waved their hands wildly, saying, “NO! BAD! TOO MUCH SUGAR!”, kids responded positively to it, making it a big hit when it went national in 1993. They’re still around, and just as sugary and bad for you as ever.

Has anyone ever actually been to accurately identify the various mystery flavors candy can come in? When I was a kid, the Dum Dum pops with wrappers covered in question marks and the “White Mystery” type of AirHeads were the most coveted of treats; but to this day, I couldn’t exactly tell you what they tasted like (other than sugar). For the curious, a guy named Steve Bruner invented AirHeads on August 7, 1985; technically it’s a type of taffy, and the first flavor produced was red. Not strawberry; not cherry; red. Dum Dums, meanwhile, have been around in some form since 1924, and according to Mental Floss, the “Mystery Flavor” pop is a mixture of the two flavors that come together when the end of one batch meets the beginning of the next. Dum Dum’s flavor history page notes that Mystery was an established flavor by 2001; I definitely remember winning them as prizes for getting 100 percent on my spelling tests when I was 10 years old, though (1995), so I suspect they’ve been around in some form for a considerable amount of time.

Images: Brandtwist, Oh No They Didn't, The Online Candy Shop

More like this
Andie From 'How To Lose A Guy In 10 Days' Is A Total Gemini
By Nina Kahn
Dunkin’s Valentine’s Day Lineup Includes A Drink That Tastes Like Dessert
By Alexis Morillo
Pret & Costa’s Coffee Is The Strongest On The High Street, According To Which?
By Sam Ramsden
15 Black-Owned Liquor & Wine Brands To Add To Your Bar Cart
By Alexis Morillo
Get Even More From Bustle — Sign Up For The Newsletter
From hair trends to relationship advice, our daily newsletter has everything you need to sound like a person who’s on TikTok, even if you aren’t.