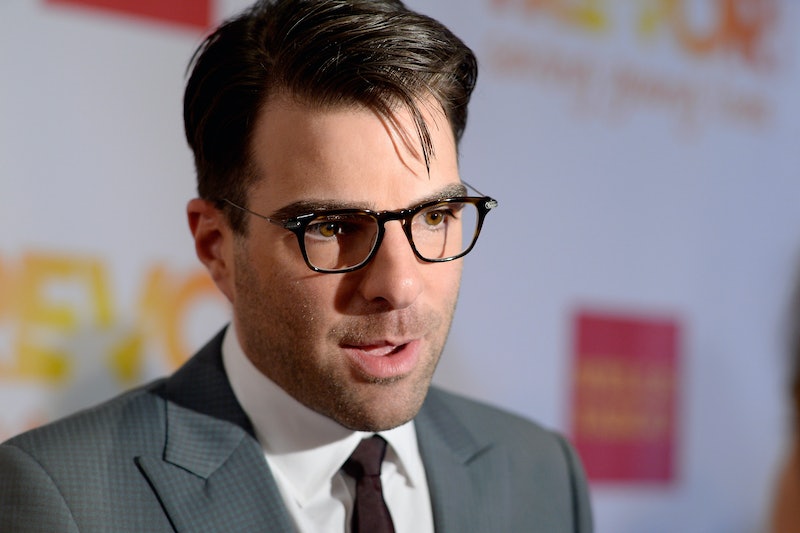 A lot of things are up in the air going into the fourth season of HBO's Girls. But at least one new exciting detail has surfaced: Star Trek's Zachary Quinto will be on Girls this season. So who's he playing? Well, it's hard to tell so far. Apparently Hannah Horvath's got some community service action going next season — either voluntarily or... not, as in court ordered or otherwise mandated by someone — because Quinto and Girls star Lena Dunham are filming scenes at what appears to be a community service situation in Brooklyn. Us Weekly posted paparazzi pics Wednesday of Dunham and Quinto rocking "Ask Me My Name" smocks.

Quinto has been posting photos from the set on his Instagram, and HBO confirmed the casting Thursday. According to TVLine his stay will not be long and he'll likely only be in the one episode. And hey, the dude may spend a lot of time traversing different planets in the Star Trek movies but it's hard to argue that Quinto doesn't look like he belongs on a show based in Brooklyn.

Another thing the context of Quinto's presence on the show tells us: Hannah's definitely in New York and it looks like she'll be there a lot this season. It seems we'll have to wait and see how Adam (spoilers maybe?) ended up with Gillian Jacobs' new character and what the hell happened to Hannah's Iowa grad school plans.