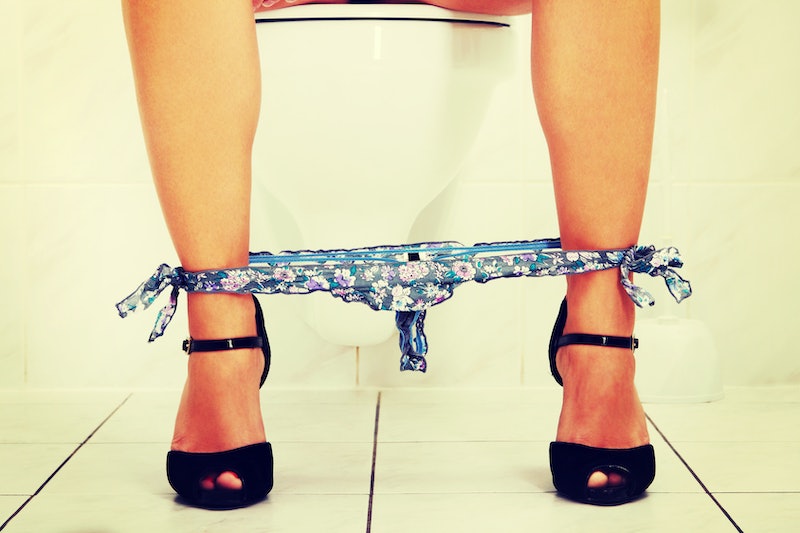 Remember that scene in the Orange Is the New Black season two premiere (just assuming we all finished it a week ago) when Chapman was deprived of her basic right to use a bathroom, and thus had to hold it… for hours, and hours, and hours? Well, there’s actually a device that would have aided her in that situation — you know, if Chapman had access to the internet and could afford to wait a week or two while it shipped. (I know, it’s not called “Orange is the New Black: An Netflix Original Documentary,” for a reason. Whatever.) Ladies and ladies, I give you: the Pee Pocket.

The Pee Pocket is a device you can actually urinate into when you’re, you know, not within a particular radius of a usable bathroom (gas station bathrooms at sketchy rest stops in the desert don’t count as “usable bathrooms”). It’s a small, foldable, and very disposable funnel you can take (or smuggle) pretty much anywhere. It even comes with a “hygienic tissue wipe” and hand wipes to complete your bathroom-in-a-tiny-package-that-fits-into-that-secret-zipper-place-in-your-purse experience. Pretty genius when you think about it, right?

I know what you’re thinking: why does this sound so familiar? Hasn’t it been done before? Well, yes and no. I’m sure you’ve encountered images of the GoGirl Female Urination Device (FUD) at some point during your days on the Internet. It’s this clunky plastic cup attached to what looks like a Red Bull can that you can pee into while standing up on the go. Despite it’s similar purpose, you actually have to clean it, and given the choice between something that involves washing urine off something and something that is disposable, I’ll go with disposable. There are also illustration enhanced how-to articles out there describing the best way to pee while standing up with absolutely zero handy gadgets... Yeah, I'm liking this disposable, foldable cup method the best too.

For the low, low price of $1.75 (I know, it actually is low) or three for $4.95, you can have a Pee Pocket of your very own. Perhaps Jenji Kohan could write these into Red’s smuggling storyline for season three? Even though I tend to stay within a certain distance of a usable Starbucks bathroom at all times, I still get worried about people who don’t have that advantage. I get worried about fictional female prison inmates (Poussey and Rosa to be specific), marathon runners, my friends who like to camp a lot, my friends who went to Burning Man without me…OK, not them, but I can imagine they would find the Pee Pocket useful!

If you’re interested, go to thepeepocket.com and prepare to urinate while standing up. Because you can.

More like this
The 6 Best Hydro Flask Alternatives
By Maria Cassano
The Best Underwear For Sensitive Skin, According To A Dermatologist
By Alexa Vazquez
Is The Insta-Famous Always Pan Actually Worth It?
By Jessica Goodman
Poshmark Vs. Depop: How The Reselling Apps Compare
By Emma Carey
Get Even More From Bustle — Sign Up For The Newsletter