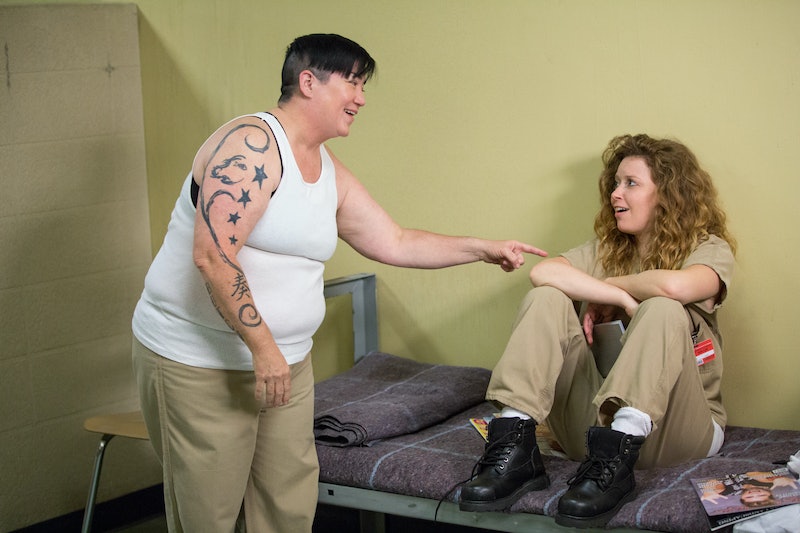 This might be my sleep deprivation and red bull-flooded veins talking, but after binge-watching Season 2 of Orange is the New Black , I can confidently say that it was way better than the first season. It was a solid 12 hours and 57 minutes of one amazing, prison-filled ride of laughter and tears. But mostly laughter because the highlight of the season was the camaraderie and emotional relationships — not specifically sexual relationships — between the women in Litchfield Penitentiary. Although the first season also focused on the inmates' relationships, this season made sure to show the lighter sides of them.

Whether it was Taystee, Poussey, and Co. playing a heated game of celebrity or Nicky and Big Boo competing to have the most sex, the show was at its best when it was showing that the inmates (and guards) are all just one big, happy fucked up family. (It also helped that Pennsatucky returned in all her religious glory.)

But besides the inmate friendships, this season turned out so well because of four other specific reasons: less Alex and Piper, the show's new villain, a hysterically satisfying ending, and (of course) random stuff that the characters said and did.

A Lack of Alex and Piper

Going into the season, I thought that I'd be disappointed that Alex (Laura Prepon) was going to be a minor character, but I quickly realized that with her character out of the picture (well, out of it for most of the season), there was more room in the show to focus on the other women (who deserve all of the attention in the world). Plus, apparently Piper's character is way more fun (and way more tolerable) to watch when she's not in the middle of a messy love triangle. Believe me, I wish that I missed Alex and Piper, but I seriously didn't at all. I actually groaned whenever Alex was on screen because she just brought along a crap load of baggage with her. Of course, as we found out in the final episode, she is coming back to prison next season for violating her parole...

This season also deserves one giant A+ for its new antagonist: Vee (Lorraine Toussaint). Vee plays Taystee's kind-of-almost mom, and boy, oh, boy is she deliciously villainous. If you thought Red was bad last season, then you're in for one big, ugly surprise. She's one of those evil characters that can manipulate someone else with just one sentence. She's also one of those characters that you want to punch in the face every time you see the lack of soul behind their eyes.

After last season's major cliffhanger, I assumed that we'd be stuck with another one this time around; however, within the last five minutes of the show, everything was tied up in a pretty bow that left almost no questions to be asked. Throughout the 13 episodes, we got a glimpse into the life of cancer-stricken Miss Rosa, and if you have a heart, then you only wanted the best for her... and you only wanted the worst for Vee. Lorna letting Miss Rosa steal the white van so she could die in peace (and not rot away in a prison) was one of the most emotionally satisfying endings that the show could have gone with. And it was only made better by the fact that Miss Rosa purposefully hit Vee with the van during her escape. Sweet revenge. (Although, there's always the possibility that Vee could pull a Pennsatucky and still be alive so she can come back for next season.)

And All This Nonsense: