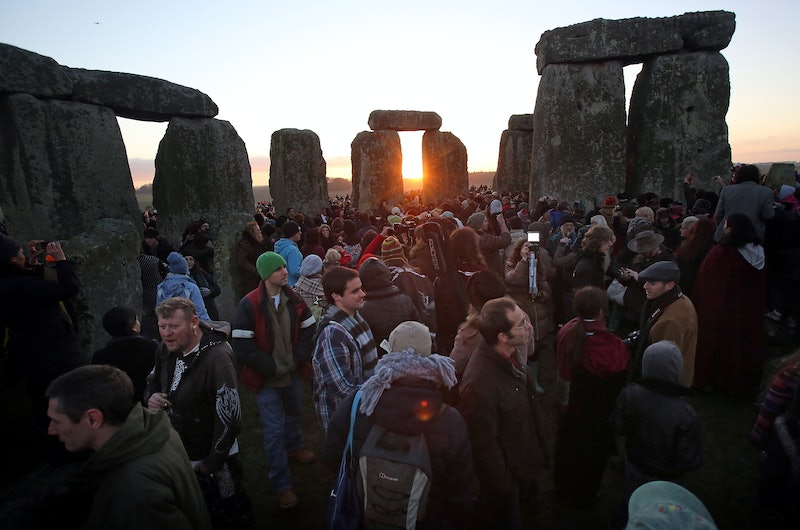 For those of you dwelling in the Northern Hemisphere, the Summer Solstice is Saturday, June 21. Down here in Australia, the 21st of June will mark the shortest day of the year and the official beginning of winter. While I’m crying into my steaming bowl of oatmeal, you will celebrate the official beginning of summer, widely regarded as the most amazing season of the year. School's out, the sun is shining, it’s festival season, watermelons are easy to come by! There are endless things to be excited about.

Since the Solstice falls on a Saturday this year, you have ample time to devote to a good old fashioned ritual. Ancient civilizations, religions, and contemporary communities all over the world have been celebrating the beginning of seasons for centuries. For ideas on how to plan your own Summer Solstice ritual, take inspiration from those who have been doing it for years:

Thousands are expected to descend upon the ancient Stonehenge site for the annual Summer Solstice celebration. You, like me, may not have ready access to a 4,000-year-old wonder of the world, but don’t let this keep you from a Druid-style fiesta.

Stonehenge revelers arrive at the site on Friday evening and party all night in anticipation of the first sunrise of summer. To channel that spirit, light a bonfire, drink wine, and listen to summer music. Camp under the stars. Get yourself somewhere beautiful and pull yourself out of bed to watch that glorious long day start. Find out what time the sun rises on the 21st here.

Remember reading Shakespeare’s "A Midsummer Night’s Dream?" He set the mystical play during the Summer Solstice, when Druids believed picking certain plants, including St Johns Wort, verbena, rue, and roses, brought special powers. As the legend goes, plants picked on the day of the Solstice then rubbed on the eyes may entice the fairies to reveal themselves to commonfolk.

Although I wouldn’t hold my breath for the appearance of mystical fairies, I would argue that this is the perfect opportunity for a themed party. Dress as a fairy, BYO St John's Wort. Roses and eye drops provided.

Many Native American tribes, including the Sioux, traditionally perform a Sun Dance and a “deeply spiritual and grueling ceremony” as a show of gratitude for the Solstice. The Sun Dance always happens around midsummer, but takes place over four days, rather than just on the solstice. Rituals include dancing, drumming, smoking, and fasting. Some participants may pierce their skin “with skewers of wood or bone which are attached by rope to a central sun pole.” Others participate in a purification ritual, typically by entering a sweat lodge for an extended period of time.

In that spirit, host a gathering of friends and family for feasting, singing, storytelling, and games. You could go the dancing and drumming route by throwing your own living room dance party, or throw on some music and dance under the stars. Alternatively, sweat it out under the sun (if you’re somewhere hot) or head to a sauna to detox in preparation for a new season.

The Summer Solstice was a day ancient Roman women celebrated their femininity. The Temple of the Virgins was traditionally reserved for — you guessed it — virgins. On the day of the Summer Solstice, married women were allowed to enter the temple to make offers to Vesta, the goddess of hearth and home.

Why married women, traditionally homemakers even then, weren’t allowed to make offerings to the goddess of hearth and home on any day they pleased is beyond me. Regardless, let this be a reminder to celebrate your feminine freedom and power. Don’t take shit from anyone. Remember that everyone, regardless of marital status, gender, age, sexuality, race, or ability, should be allowed to participate in whichever celebrations they damn well please. Have drinks with girlfriends and plan your summer. Plan travel. Talk about your rad jobs. Discuss books and politics.

Make a Solstice Altar of Light. Light some candles and surround them with fresh summer flowers and fruits. I would add the non-yogi touch of roasting a marshmallow over the candle, but you can use your imagination.

Mystic Mama suggests making a Summer Solstice Tea by putting summer flowers, plants and fruits in water, then letting your "tea" brew in the summer sun. She reminds us that since Mercury Retrograde has just entered cancer, adding the water element is a good idea! Take your yoga outside and do a few sun salutations... in the real sun!

As the sun spirals its longest dance,

As nature shows bounty and fertility

And to fulfill their truest destiny