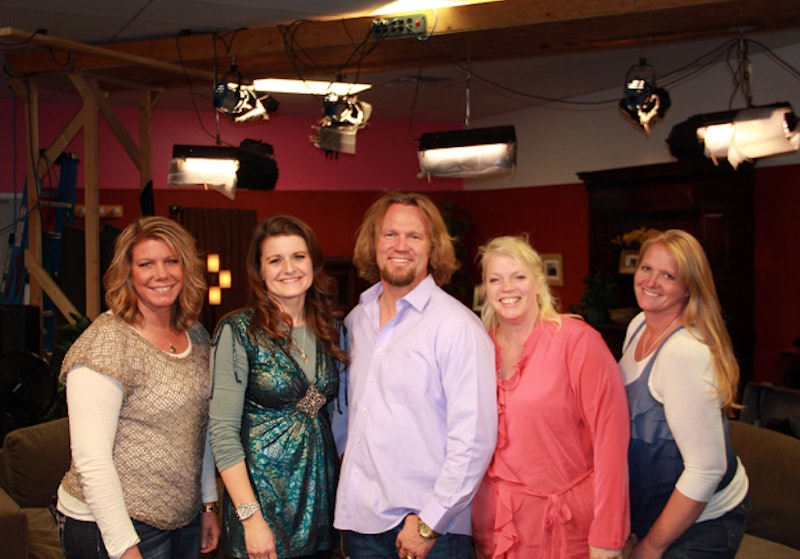 By putting their lives on TLC for the world to see, Kody Brown and his four wives are obviously very open about their religious beliefs, but sometimes we're a little confused as to what those might be, exactly. We know the Sister Wives are fundamentalist Mormons, but they do a lot of things that many mainstream Mormons are traditionally forbidden from doing, you know, like marrying more than one wife. They, and many state governments (remember that legal battle the Browns were in?), kinda frown upon that. But do the Las Vegas-residing Browns themselves frown upon drinking and gambling?

First it's important to better understand their religion. When explaining it, the Browns are pretty clear: They do not condone anything that FLDS sect leader Warren Jeffs has done — like impregnating one of his 15-year-old followers, for example. Kody and his wives first belonged to a very specific sect of the fundamentalist Mormon religion, the Apostilic United Brethren, in which polygamy is still practiced. However the Browns later branched off from that sect.

Since their move to Las Vegas, I've been wondering: Are they partaking in any of the city's more notorious activities? I'd assume that if their religion does allow drinking alcohol or gambling, it's not something they practice on a regular basis (or ever), just based on what we know of the family's personality and values from watching Sister Wives. Sure, we'll never see the Browns at any burlesque shows, but does their religion forbid them from hitting the casinos or grabbing a beer? I did the research to find out.

So Can They Drink?

It's complicated. While mainstream Mormons aren't supposed to drink caffeine or alcohol, FLDS Mormons are totally allowed to knock one back (and drink caffeine!) from time to time and in moderation, of course. However the Sister Wives don't technically belong to either group. They're fundamentalist mormons, but not part of Jeffs' specific FLDS sect. Based on what we've seen on the show however, the Browns can drink, it's just not something they're really into. In one episode, they went to San Francisco to find dresses for their commitment ceremony (only to later settle on their disappointing handmade ones) and stopped by an Irish pub to try some beer, but not without being outwardly squeamish about it.

But Can They Gamble?

Not so much. Like they are with alcohol, Kody and the gals get pretty uncomfortable by even setting foot in a casino, which must be pretty hard when they're living in Vegas. When they decided to sell their jewelry line in a casino gift shop, the family made it clear that they don't condone anything that goes on in there — and had a bit of a moral dilemma before eventually deciding to go ahead and sell the jewelry there.

It seems like kind of a bummer that the family feels uncomfortable doing what so many others specifically go to Las Vegas to do, but they definitely seem to be enjoying their lives — and their gorgeous new custom homes — regardless. And if Meri, Christine, Robyn, and Janelle can manage to raise that many kids and deal with Kody without a daily drink, they can pretty much do anything.