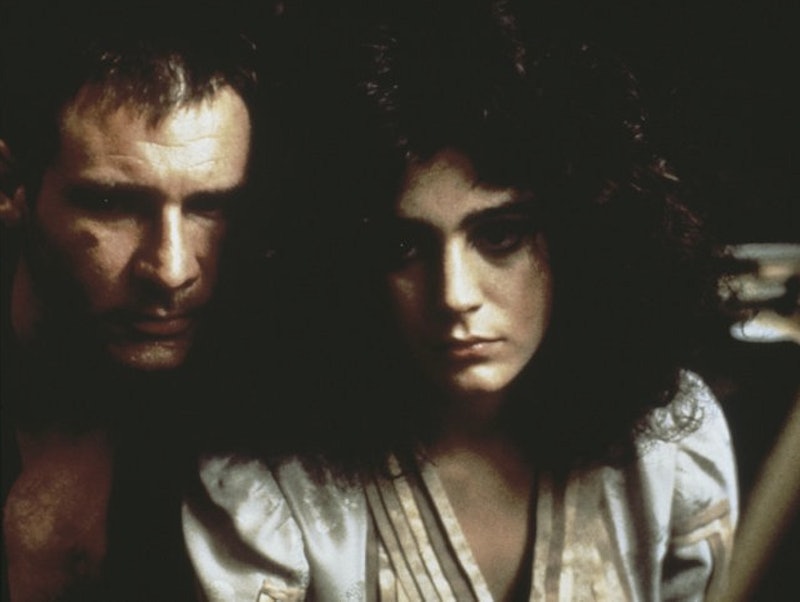 I first watched Blade Runner at 12 or so — very reluctantly, because at the time I was more into movies like 13 Going on 30 and She's The Man, rather than noir-inspired films set in the dystopian future. Especially when they happen to be over two hours long.

But the power of Ridley Scott was enough to convert me into a science fiction fan, and Blade Runner has been one of my favorite movies since. There are a lot of reasons I love it, and the retrofuturistic/'80s style is definitely one of them. I mean, how fascinating: An '80s spin on 1940s film noir-inspired fashion set in — get this — 2019? It's like the Inception/Matryoshka dolls of period costuming (though J. Law could give them a run for their money, number of time period-wise).

Whatever stye era they happen to be emulating, there's no denying that Blade Runner had some pretty epic fashion going on. I love Rachael's ultra-strong silhouettes (can you say "shoulder pads?"), and Zhora and Pris' looks are, if possible, even more iconic. Here's some of the best costuming/beauty moments, compiled for your enjoyment.

Throw it over a metal bikini, and you've got quite the look. It's perfect for elaborate chase scenes through Downtown LA!

When you're going to attempt to strangle Harrison Ford with your thighs, you might as well look crazy fabulous (and fabulously crazy) doing it. 2019 is only 5 years away, and I can't wait for Pris's bandit-mask look to come into vogue.

Those have got to be the very majorest of major shoulder pads. Oh wait...

Well, she definitely gives herself a run for her money.

Looks like Zhora was doing Britney's iconic looks back when Britney was just a baby. I'm sure Rihanna would also be a fan.

6. Last but not least: Rachael's hair

Look, we all love her exaggerated rolled bangs, but when she quite literally lets her hair down, the result is like something from a Pantene ad — heck, it's almost got me running to the salon for a perm.

More like this
Harry Styles’ Red Carpet Looks Have One Thing In Common
By El Hunt
Anne Hathaway Revived 'The Devil Wears Prada' In The Most Andy Sachs Way
By El Hunt
Prefer Alcohol-Free Perfumes? Water-Based Fragrances Are On The Rise
By Audrey Noble
12 Absolutely Angelic Cherub Tattoo Designs
By Paris Giles
Get Even More From Bustle — Sign Up For The Newsletter