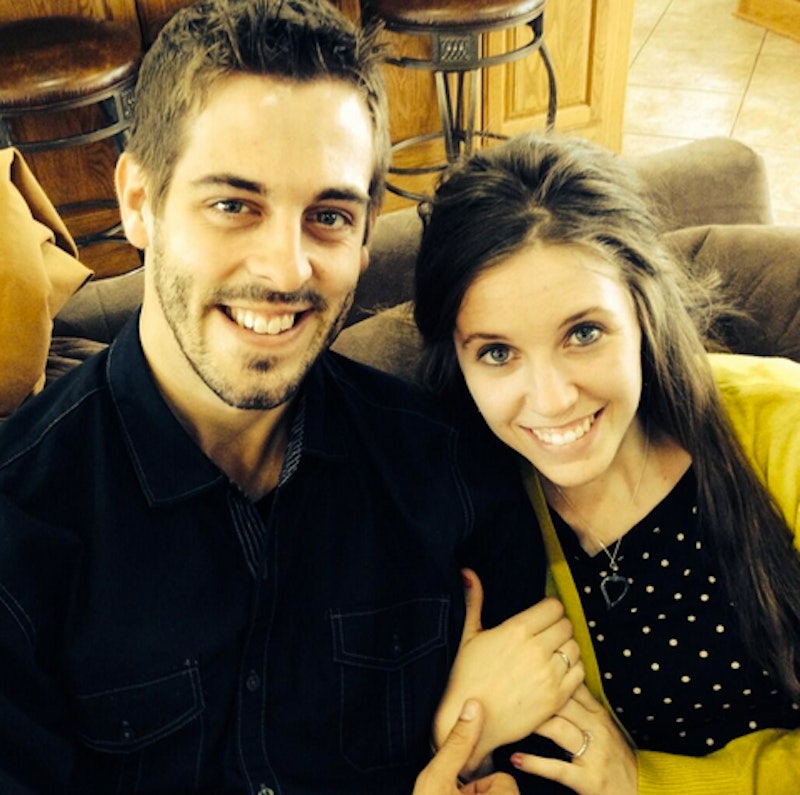 If you've ever casually flipped through television channels only to end up on TLC watching reruns of 19 Kids & Counting — or even if you've ever simply been on the Internet — then you probably know who the Duggars are, and, by now, you also know that their family does everything big. (After all, there are 21 of them in total.) Weddings, it turns out, are no different. On Friday, June 20, Jill Duggar and fiancé Derick Dillard had an emotional rehearsal dinner where they prayed with over 100 family and friends, and readied themselves for a 2,000 person wedding.

Yes, you read that right: over 2,000 guests are expected to attend the Duggar wedding today. 2,000! That wedding is gonna get TURNT. UP. (Just kidding. They probably don't even know what this phrase means.) Anyway, while I totally get that the family wants to share the occasion with as many loved ones as they can, does 2,000 not seem slightly excessive? That's a lot of people — and although I can see how the Duggars have that many friends and family (most of the people they associate with also have large families of their own), shouldn't weddings have some level of privacy? I mean, Duggar and Dillard's wedding registry, which included guns and cereal, wasn’t even that large — one can only really buy so many pianos and brands of cereal for a single couple.

It brings up an interesting thought about the often large sizes of celebrity weddings. Though the Duggars aren't quite conventional celebrities, they're in the public eye, and when you have a 2,000+ person wedding, you qualify for this category. On one hand, I get it. Your mom wants to invite her co-worker, who wants to invite her boyfriend’s aunt’s second cat — but there should come a point during all the wedding planning that you stop and ask yourself whether or not you’ll even be able to properly share your day with all those people. How can someone even greet 2,000+ people without copious amounts of champagne?

Let’s look back at Kim Kardashian's wedding to Kris Humphries for a moment. Not only did the Kardashians film this gigantic event so that it would be televised on E!, but their marriage also only lasted a short 72 days. So, it completely made sense when Kardashian and Kanye West had a more low-key ceremony (in terms of public coverage, anyway — flying guests from the rehearsal dinner in Paris to the actual wedding in Italy over the course of one night on private jets and taking four days to shoot a single wedding photo isn't exactly low-key) with a tight guest list.

This isn't to say that the outcome of a marriage is relative to the extravagance of a wedding, but it's worth considering if there's a correlation between excessive weddings and the subsequent happiness of a couple after the craziness and whirlwind of a major event calms down. The Duggars have never been one for Kimye-like extravagance (I mean, their wedding registry was with Wal-Mart and they asked for cereal, that says enough), but a huge guest list adds a certain level of craziness that puts it on par. Could the Duggars learn from taking a more low-key approach like Kimye did for the next time a Duggar kid gets married?

The Duggars learning from Kimye? I know. The concept is outlandish — but still, could be worth considering. Celebrity weddings are so needlessly ridiculous these days, and I don’t want the Duggars, of all people, to get sucked into that trend: In 2006, Katie Holmes and Tom Cruise got hitched in a castle outside of Rome, in 1994, Celine Dion’s wedding dress took over 1,000 hours to complete, and in 2013, Michael Jordan and Yvette Prieto spent $10 million on their Palm Beach celebration. Unless you’re Kate Middleton, just try to remember, everyone: less is more. The point of a wedding is to celebrate love and a union between two people, not go into panic bridezilla mode because there's too much stress involved with getting the perfect dress, or, y'know, greeting 2,000 people at the reception.

Congrats to Duggar and Dillard, though!