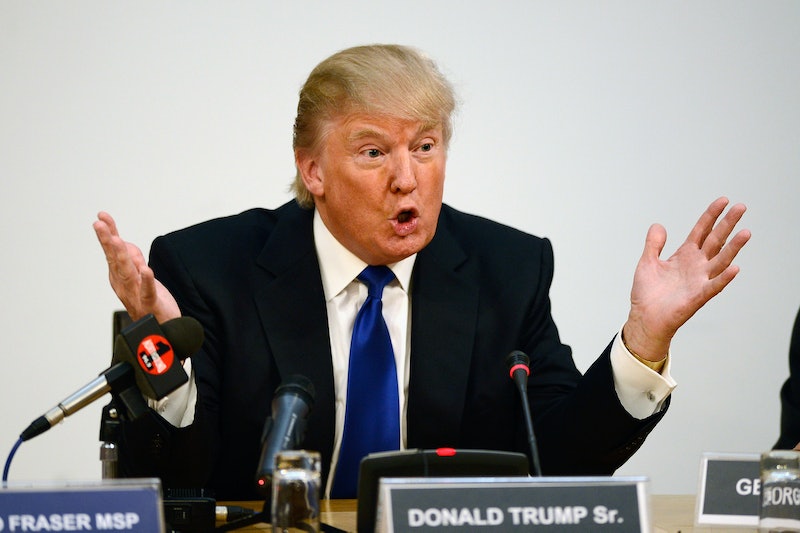 The five men known as the "Central Park Five" agreed to a $40-million-dollar settlement from the city of New York on Friday, more than 20 years after they were wrongfully accused and convicted of assaulting a female jogger. Although most have seen the settlement as a victory, there's one prominent New Yorker who's less than thrilled. Billionaire, TV personality and noted contrarian Donald Trump criticized the Central Park Five settlement in a New York Daily News editorial, calling it a "disgrace" and "unacceptable." What else should we expect from the guy who advocated for the electric chair when this case was unraveling in 1989?

The gist from Trump's ideologically disjointed editorial is: 1) the Central Park Five are still guilty and 2) the taxpayers are being screwed over. He writes that the settlement shows New York City's incompetence in mishandling the case, but not because the five young men were imprisoned and convicted for a crime they didn't commit:

Forty million dollars is a lot of money for the taxpayers of New York to pay when we are already the highest taxed city and state in the country. The recipients must be laughing out loud at the stupidity of the city.

Speak to the detectives on the case and try listening to the facts. These young men do not exactly have the pasts of angels.

Trump adds that the people who were affected the night of April 19, 1989, should also receive some (financial) closure, and ends with this sharp defense: "As citizens and taxpayers, we deserve better than this."

It's hardly surprising that Trump's anger over the Central Park Five case hasn't subdued in the last 25 years. He was, after all, one of the most vocal leaders of the witch hunt against the five teenagers since the case broke in 1989.

Just two weeks after the brutal assault and rape of 28-year-old Trisha Meili on a Central Park jogging path, Trump took out a full-page ad in The New York Times calling for the reinstatement of the death penalty. "Bring back the death penalty," the ad proclaims in bold capital letters. "Bring back our police!"

After the Central Park Five were exonerated in 2002, due to new DNA evidence and a confession from a convicted rapist and murderer, Trump received a slew of new criticism over the 1989 ad. However, Trump stood by his ad and his beliefs then, telling The New York Times, "They confessed. Now they say they didn't do it. Who am I supposed to believe?"