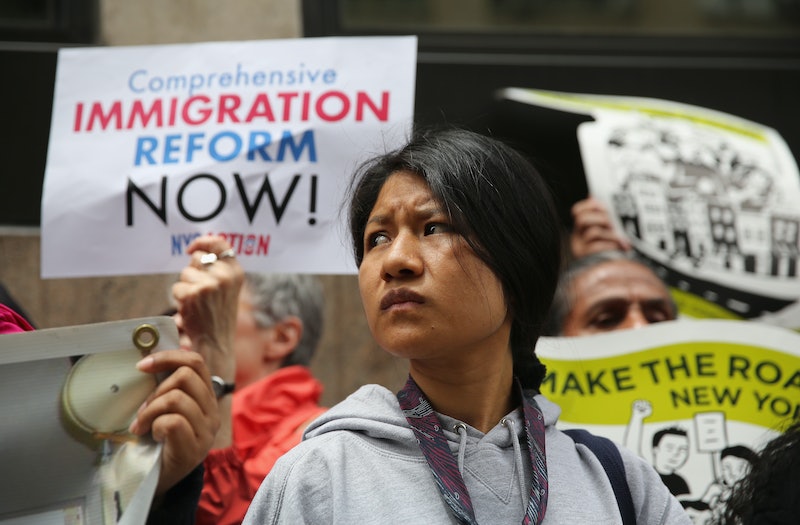 The Obama administration will launch a “surge” in border security and immigration enforcement, officials announced last Friday. It’s a multi-pronged effort that includes assigning more judges to deal with immigration cases, millions in aid to Central American governments, new detention facilities, and ankle monitoring bracelets for immigrant families awaiting hearings. There are a lot of policies here, but in essence, this is a conservative move toward stricter immigration enforcement.

So, do the new rules mean? Why is the Obama administration doing this now? And what are the implications for undocumented people? Here's what you need to know.

Why is the government opening more detention centers?

"We will house them in facilities that are humane and compliant with legal requirements," said Alejandro Mayorkas, deputy secretary at the Department of Homeland Security.

Because there’s an unfathomably long backlog of asylum and deportation cases, the administration will also assign additional judges to help process those cases in a more timely manner. Given that the current backlog is potentially 24 years long, this would appear to be an insufficient step to solving a rather gargantuan problem. And a lot of these immigrants won't have access to adequate legal counsel, Diego Ortiz of the pro-bono legal firm Immigration Equality, tells Bustle. Ortiz says the new measures could just amount to the government deporting undocumented immigrants more quickly.

"These children will, in most cases, be forced to represent themselves in immigration court against trained government immigration attorneys," Ortiz says. "Considering how difficult it is for educated adults who speak English to navigate our country’s complex immigration laws, can you imagine how challenging it must be for these children?"

What else will change?

Another aspect of the plan includes almost $100 million in aid to the governments of Guatemala, El Salvador, and Honduras to help them repatriate citizens who attempt to immigrate to the U.S. but are deported. Around 30 percent of immigrants deported from the U.S. come from one of those three countries; some of this is reportedly due to false rumors by smuggling networks that unaccompanied minors are eligible for amnesty, and so this new aid will, in part, help those governments to combat the efforts of those organizations.

Why is Obama Doing This now?

There has indeed been a surge of immigrant children crossing the U.S.-Mexican border: In the last year, 47,000 minors have been caught attempting to enter the country illegally from Mexico; a 90 percent increase from 2013. Part of this may be due to the Deferred Action for Childhood Arrivals (DACA) program Obama launched in 2012, under which child immigrants were eligible for deferred deportations if they met certain criteria.

By comparison, the government only has around 100 beds for immigrant families with children (really). Images of overcrowded, unsanitary detention centers have recently gone viral, and that’s undoubtedly one reason the administration has decided to open up new detention facilities to house incoming immigrants.

Also, and perhaps most driving the decision, it’s an election year. Republicans have been accusing the Obama administration of ignoring immigration law from day one, so this could simply be a case of a liberal president taking a conservative stance on a hot-button issue in order to gain the support of moderate voters and, by extension, help all of the congressional Democrats on the ballot in November.

What Does This Mean For Immigration Reform?

One thing’s for sure, and it bears repeating because it looms over every discussion about this issue: The prospects of an immigration bill becoming law are, and always have been, practically non-existent. Despite high hopes from pro-reform advocates, the Republican majority in the House of Representatives has shown precisely zero desire to pass a reform bill, and until that changes, immigration reform is dead in the water. Period.

That being said, Republicans have consistently cited their distrust of Obama’s immigration enforcement as a reason for opposing reform. From that perspective, this new plan could be a starry-eyed attempt on the part of Obama to earn back some of the GOP’s trust and entice them into eventually supporting a reform bill. The problem with this theory is that the GOP’s distrust of Obama on immigration has never been remotely rooted in fact, events, or objective reality, because Obama been very aggressive with deportations since taking office.

But the new policies aren’t likely to make much a difference with regard to immigration reform, as House Republicans are simply hell-bent on denying this victory to Obama — regardless of who they end up hurting in the progress.

How will these rules affect undocumented individuals?

Pro-immigration politicians and activists have reacted to the announcement with dismay, worried that new family detention centers means more immigrant children being locked up during their hearings.

Many immigration reform advocates also highlight the danger in immigrants' home countries that compels them to try and build a new life in America.

"As an organization, we believe people have the right to be safe," Ortiz tells Bustle. "We know, through the thousands of clients that we represent, hundreds originating from Central America, that people flee this region because it is not safe."

A spokesperson for Rep. Luis Gutierrez, a Democrat who strongly supports immigration reform, also criticized the plan, pointing out that "there are alternatives to detention, like ankle bracelets and supervision to manage the backlog in processing, that are much more humane and cost-effective than tax-payer funded public or for-profit detention centers."