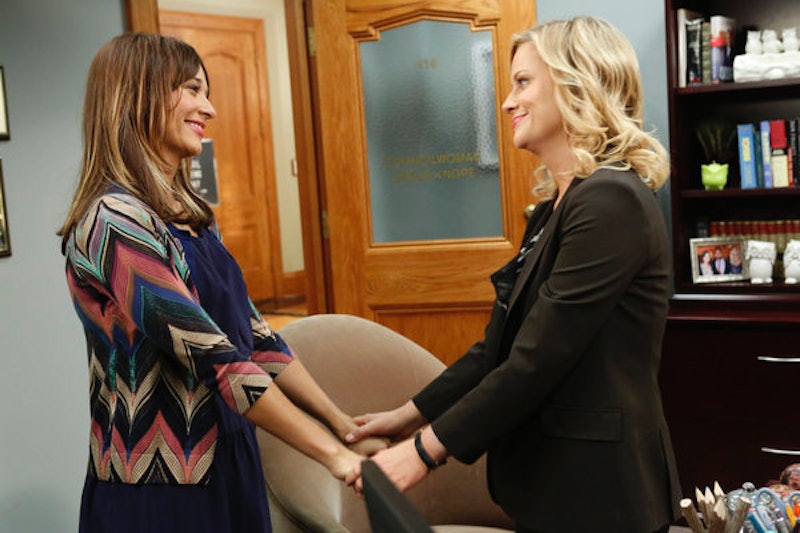 Ann, you beautiful baby bird, why are you leaving the nest of Pawnee? Earlier we found out that Rashida Jones and Rob Lowe have announced their departure from Parks and Rec, and it's killing me softly. Not only because I love the way Chris Traeger says "LITRALLY" (in fact, my iPhone has started autocorrecting literally to LITRALLY in all caps), but because the friendship between Ann Perkins and Leslie Knope is one of the most beautiful things on television.

Ann and Leslie are the best BFFs on television since Mary Tyler Moore and Rhoda were making it after all in the big city. Everything about them is totally Bechdel breaking — they met at a Parks Dept. public forum, first of all! One of my favorite Annslie moments had to be in Season 1 when Leslie gave Ann the go-ahead to date Mark, telling her that it was always "ovaries before brovaries." Or when Ann decided to be Leslie's campaign manager without any previous knowledge of running a political campaign, even buying a new wardrobe. ("I googled campaign manager and saw that they wear a lot of dark colors.") Or maybe best of all is when Ann and Leslie got hammered on Snake Juice at the Snakehole Lounge and had their first fight, which is not over a dude but over a job interview that Leslie forces Ann into. That's what I like to see on television: two women arguing about their careers.

The power of female friendship is transcendent, but it's rare to see such a genuine portrayal of that special bond on television. That's why I am so sad to see Rashida Jones leave. I love the dynamic between Leslie and Ann: I love their openness, their loyalty to one another, the way they support each other unconditionally even though they argue. Remember when Ann Perkins literally came to bail Leslie Knope out of an Eagleton jail? The friendship between Leslie and Ann reminds us of what is universally important — as Leslie Knope says, "Friends, waffles, work. Or waffles, friends, work."

It's fairly obvious that since Jones and Lowe are leaving Parks and Rec at the same time, their departure will be wrapped up in the storyline of their future child. I hope, though, that Ann and Leslie have a goodbye that does justice to their incredible friendship. I feel like I am losing my own BFF.

Get a taste of Leslie's affection: