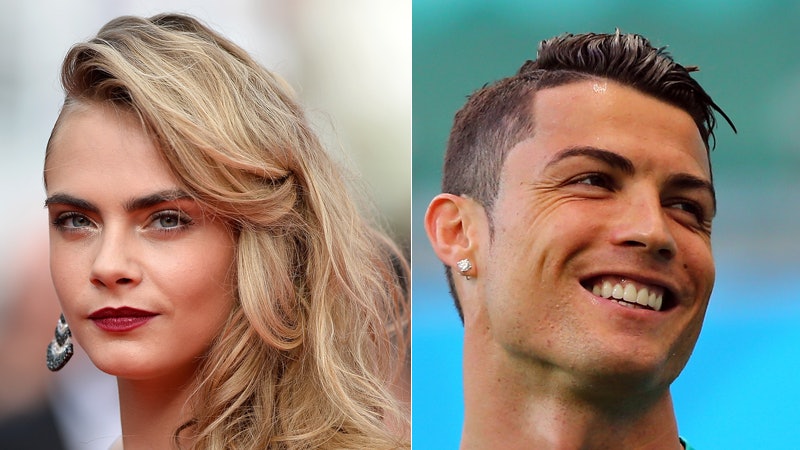 Bold brows will never go out of style, whether you are a world-famous soccer player (or footballer) or a celebrated model (or runway walker). If you overpluck, too-thin brows make you look old. Full, thick brows are indicative of youth and they are everywhere, be it natural or enhanced, from Portuguese World Cup competitor Cristiano Ronaldo to British supermodel, crazy sunglasses wearer, and celeb BFF Cara Delevingne.

Even if you could care less about the soccer mania that has infested the country as the World Cup commenced, you have to gawk at Ronaldo's perfect arches, as well as those of Delevingne, who has become this generation's Kate Moss and who hangs with Rihanna, Taylor Swift, and Michelle Rodriguez, the latter of which she was rumored to be dating.

Who has better brows? Well, let's compare and contrast according to the key points of good browdom: Overall shape, arch, fullness, color, and relationship to the rest of the face.

While they are of different genders and professions, both Ronaldo and Delevingne remind us how important a good, strong brow is when it comes to framing and shaping one's face. Both are also sorta unfairly good looking and have squads of people who can assist them with brow dominance, but still. They are both fun to look at. Let the games begin.

Ladies, take a look at Ronaldo. Ignore the obnoxious tracks and the gel in his hair and focus squarely on the brows. They taper ever-so-slightly at the end, but for the most part, they are thick, full, and with an outer arch. Having a really hard time getting over the haircut, though.

Now check out Delevingne's. Are they not the same shape and thickness? Hers extend a bit longer than his, however. It was a close call, but this round goes to Delevingne. Even with those "come hither," crimson-stained lips, her brows define this entire look.

Oh my. This front-facing view shows a chiseled-in-stone, symmetrical arch at the outer corners.

Delevingne looks like she had a little help with product and a heavy smoky eye. Her arch here is not nearly as dramatic or as natural as Ronaldo's, so he grabs this round.

In this shot, Ronaldo's manscaped brows are incredibly uniform. There is hardly any tapering, save for the very end of the brow. They appear as thick at the nose as they do at the arch.

Delevingne's brows are also equally and uniformly thick from stem to stern. I can't call this one. It's totally a draw. Anyone besides me thinking these two would be a sexy celeb couple?

Ronaldo's drapes match the carpet. There is no finagling with his brow hue here. And that's okay. Too much mussing and fussing with his brows would push him into the "overly metro" world. This color is so natural.

Delevingne's brows change their hue. Sometimes, she's black. Other times, she is an ashier brown, as evidenced above. She is able to change the overall vibe of a look with these color gradations, so the model has the edge here.

5. Relationship to the Rest of the Face

Okay, so I cheated and looked for (and found!) a reason to look at a shirtless Cristiano Ronaldo. Like his brows, his chest and abs are chiseled and are perfectly cut. He is well-maintained, physically speaking, from his brows down to his washboard belly. His handsome face requires a strong brow, and has it.

Delevingne has strong features as well. Her cheekbones and jaw are not delicate; they are bold like her brows and therein lies her head-turning beauty. Rather than try and soften with a wispy brow, she embraces a well-defined one. She has the edge, again.

Looking back at and analyzing the brows of these two genetically blessed celebs, I have to give Delevingne the "win." They are her signature, and being a model, she is able to have fun with them and change them up as part of her job. But to his credit, Ronaldo has the best dude brows on the planet.