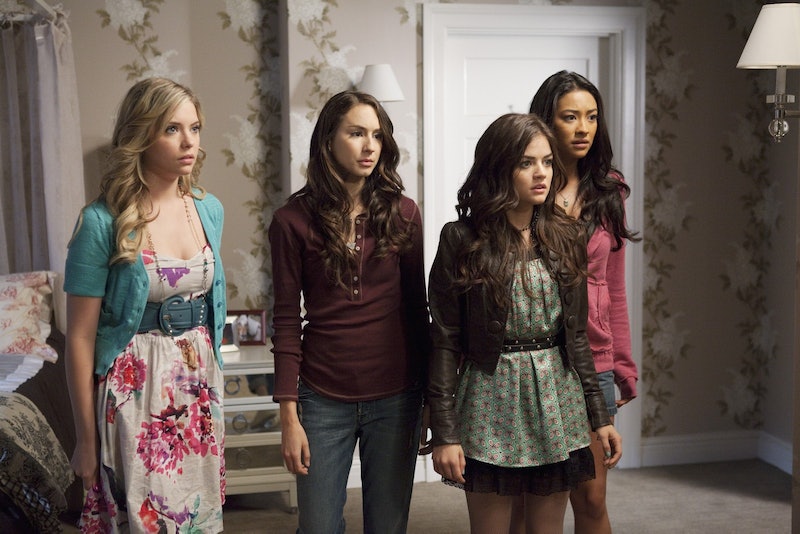 Oh, Pretty Little Liars... once you shut the door on one mystery, you just have to leave us with another. In true Pretty Little Liars fashion, the Season 3 finale left us with way more questions than answers. Among them: "Is Ali really dead?" "Who is Red Coat?" "Who framed Toby?" "What are Jenna and Melissa up to?" "Will Aria ever wear school-appropriate clothing?" and, most importantly, "What is in the trunk?". The last we left our little liars (and Mona!), they had opened Detective Darren Wilden's trunk... and found something. Something big, apparently. Fans have been abuzz with ideas about what — or who — could be in the trunk. Here are seven people who our liars might have uncovered.

It is Detective Wilden's car, after all. Ashley made it her business to protect Hanna from the creepy Detective (even sleeping with him to keep him quiet) and that usually made Wilden mad. A confrontation ended with Ashley accidentally hitting the detective with her car, and though Wilden survived the hit-and-run (thanks to Jenna and Shana), he could still be holding a grudge. While it would suck to have everyone's favorite wino Mom gone, it wouldn't be all that surprising if Ashley became a victim of Wilden's revenge. A would definitely take advantage of that.

Ashley isn't the only one getting on people's bad sides. CeCe told the girls that Detective Wilden got Ali pregnant... and that Ali was killed because of the baby. While it's gag-inducing even imagining the creepy detective and Ali as a couple (though, still somehow not as creepy as "Ezria"), the rumors could be enough to get CeCe thrown in a trunk. Also, CeCe did hide the fact that Ali got her kicked out of school, so we wouldn't be surprised if there were more secrets that CeCe was harboring.

Jason was a member of the N.A.T. Club in high school, and while I still have no idea what they did, the fact remains that the members of this club wind up dead. (Remember Ian and the bell tower? Garrett's body in that box? SUPER CREEPY STUFF YOU GUYS!) If he is dead, we'll be mourning the loss of those beautiful abs.

Because Wren is super shady! Yes, British, beautiful, and an M.D., but so damn shady. Is he a good guy? Is he working with the A-Team? Is he even really British? He's really been a mystery since the pilot. If it is him in the trunk, we'd have no clue why... but it wouldn't be completely out of left field considering his shifty behavior.

Our second doctor on this list, Dr. Sullivan — who helped unearth Emily's repressed memories and prove Mona was crazy — could have easily made it on A's bad list. Someone who routinely tries to help the liars? Yeah, those people don't end up doing too well.

If Ali is Red Coat — and if she is the one working with A/is the New A — she might be mad at her once potential baby-daddy. Plus, if Red Coat/Ali/New A is out to get the girls, framing them for a murder would be way easier if it was someone that the girls notoriously hated.

WHERE HAS MIKE BEEN?! WE NEED ANSWERS.