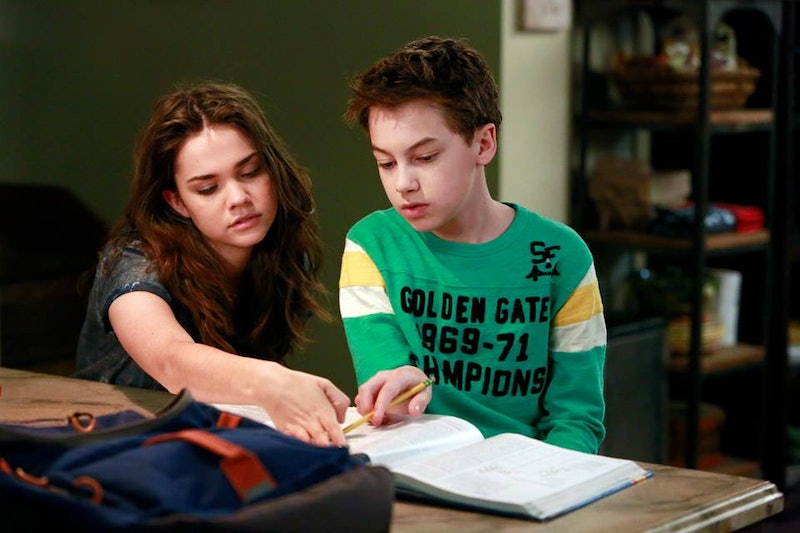 Well, this complicates everything. When ABC Family's The Fosters Season 2 premiered on June 14 they introduced Kerr Smith and Bailee Madison as Callie's long-lost family. Which was totally cool — except for the fact that he more or less been stalked his biological daughter. On Monday night's episode, Smith's Robert Quinn bailed out on a DNA test he required Callie to take before signing her over to the Fosters AND played on her emotions with a letter from her half-sister. Is Quinn messing with Callie? And is it even remotely the right thing to meet her half-sister?

Quinn sketched me out when he first showed up in the Season 2 premiere. Why? Because he was basically stalking Callie at her job, there's really no other word for it. Then, on Monday night, Quinn required Callie to take a paternity test to prove that she's his daughter and sign a contract that she'll never sue him. Which, while insulting, was understandable — I guess. Callie obliged because, hey, she just wants to get adopted and if this guy's going to be a jerk, it just makes her decision all the easier. Props to you, girl.

But, because this is Callie and everything is always wrong — Quinn never showed up. Yes, he required an in-person DNA test and he just never honored his end of the bargain. Could you be even worse of a human? This is a teenage girl who just wants to have a real family for the first time in her life and you're putting her through the ringer just to be an asshole to her. At which point a dismissed Quinn as a villain. Thanks to the wonderful world of Google, Callie was able to search Quinn and put a face to the name and, of course, that face was the same as Vanilla Milkshake Man That Tips With Hundred Dollar Bills. Boom. (Fans already knew this, but this was Callie's first time putting it together.)

So I was totally rooting for Callie when Quinn showed up the day after the test at Not A Burger Stand and she gave him an earful. Which was completely deserved, but he played a sympathy card on her — claiming that he knew from first sight that she was his daughter and that only his family wanted her to take the test, not him. And THEN he hands her this letter. I'm sorry, but does anyone smell a rat to me?

I want Callie to have the best possible relationships, but I really don't think it's in her best interest to strike up a relationship with Quinn and her half sister. Quinn is a grown man that can't stand up for himself and can't even show up and be in the same room as his biological daughter. That's really not a positive male role model for her. And as for her sister, it almost seems like Quinn's using her interest in Callie as a way to string his first daughter along. Sure, the request to meet is probably genuine, but why now when Callie's so close to getting the family she's always wanted? Something just doesn't feel right here.

More like this
Romeo Beckham Shared A Sweet Farewell Note From “Proud” Sister Harper
By Sam Ramsden
This 'White Lotus' Symbol Could Hint At A Major Character's Death
By Grace Wehniainen
Keke Palmer Just Announced She's “Going To Be A Mom” On SNL
By Brad Witter
The 'Firefly Lane' Book Ending Teases Way More Tears To Come In 2023
By K.W. Colyard
Get Even More From Bustle — Sign Up For The Newsletter