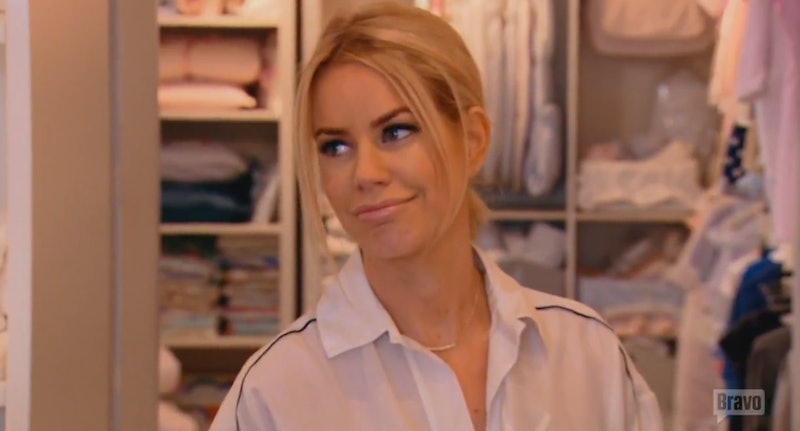 I am stupid-obsessed with Ladies of London 's Caroline Stanbury. Not in a creepy way. In an awestruck way. If I were to meet her in real life, I’d fawn over Caroline 10x more than Marissa Hermer did during the series premiere (assuming I mustered up the courage to interact with her, that is). Oh, and I'd definitely curtsey. But that'd be it. She is beyond fab.

So what transpired this week? Did Caroline strike again? Woo, nelly. You bet. Throughout Monday night's episode, the cast discussed Juliet Angus and Annabelle Neilson's Fourth of July quarrel (but Juliet and Annabelle never actually talked. Oo, I smell a fight storm a-brewin'), Noelle Reno almost moved into a new flat, and Caroline slayed me repeatedly.

"That last one is too vague," you say.

You spoke too soon. Because I'm about to hit you with a list of specifics. Here are five things I learned about Caroline during Monday night’s episode that solidified my adoration:

She’s Not A Hat Person

Caroline attends a hat party and shrugs at the decorative headgear. She doesn't wear hats, and a fancy hat party isn't going to change that. She'll play along and try on a hat, but she won't enjoy it.

I am not a hat person either. We non-hat people have to stick together.

She Doesn’t Feel Obligated To Take A Side

She tells both Juliet and Caprice they handled the Fourth of July party argument poorly. Yes, Caprice is an old friend, but that doesn't cloud Caroline's ability to judge the situation. She's objective and blunt, no matter the price. (This particular instance may have cost Caroline hosting Caprice's baby shower.) She'll call you on your shit.

Every friend group should be so lucky to have a Caroline.

She Expects Plenty Of Notice

She tells Juliet that the British tend to make plans months in advance. This speaks to me on a very real level. The more notice, the better! The mere thought of last-minute plans causes my palms to go clammy.

Caroline's a busy person, and I imagine it's difficult for her to squeeze in a spontaneous get-together. I can't even begin to fathom what her day planner looks like. Ugh, she's so fab.

I'm not terribly busy, so what's with my hangup regarding last-minute plans? Oh, you know. I need as much time as possible to mentally prepare for any and all plans. It's not a glamorous answer, but it's my answer.

She’s Not Going To Inconvenience Herself For a Hat Party

Caroline lets Juliet know the only reason she showed up to the last-minute hat party is Juliet's house happens to be on her way home from her office. If that party was both last-minute and not a part of Caroline's route? FUHGETTABOUTIT.

If She Doesn't Want To Go To Something, She Won't Go

More like this
15 Piping Hot Behind-The-Scenes Secrets From 'Great British Bake Off'
By Emily Dixon and Darshita Goyal
What’s New On Netflix: Ana De Armas’ 'Blonde' & A Nick Kroll Special
By Arya Roshanian
The ‘Ted Lasso’ Cast Singing Along To “Sweet Caroline” Is Pure Gold
By Sam Ramsden
Filming For 'Bling Empire' Season 3 Picked Up Right After Season 2’s Drama
By Gretchen Smail
Get Even More From Bustle — Sign Up For The Newsletter