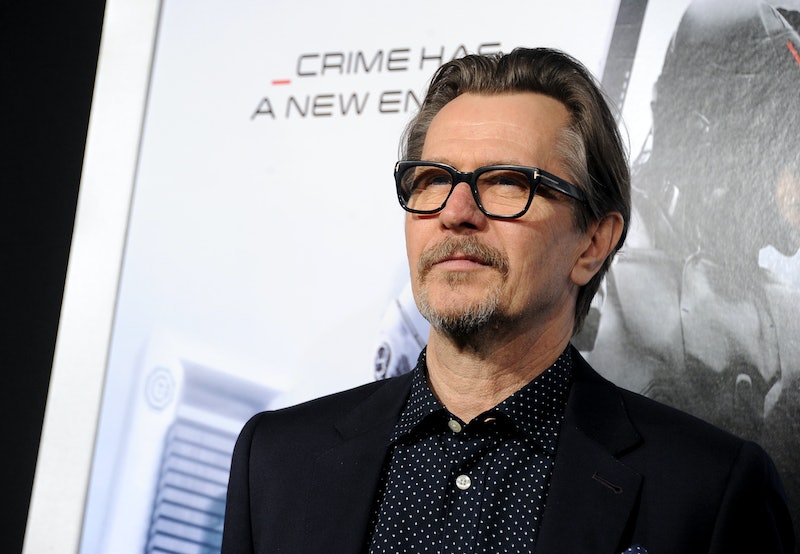 Here's one celebrity you won't want to invite to your dinner party. Actor Gary Oldman made a bunch of offensive comments in his recent interview with Playboy, and I'm starting to think much less of The Dark Knight's James Gordon. (Thank God Ben McKenzie is taking over the role for Gotham.) Oldman's outrageous comments about Hollywood, racism, and "political correctness" will leave you seething... at least, if you're one of those politically correct squares like myself.

Oldman's Playboy interview reads like a bizarre attack on Hollywood, which is surprising given that he's a huge name in the industry. After complaining about his famous roles in Sid & Nancy (he didn't think he was "good" in it), Prick Up Your Ears (he wasn't "the right person" to play Beethoven) and the Golden Globes (it means "nothing" to win one), Oldman decided to get political on us. After stating that "political correctness is crap," Goldman decided to start spouting out the least politically correct things he could think of. For example, this defense of Mel Gibson's anti-Semitic rant:

I don’t know about Mel. He got drunk and said a few things, but we’ve all said those things. We’re all fucking hypocrites. That’s what I think about it. The policeman who arrested him has never used the word nigger or that fucking Jew?... Mel Gibson is in a town that’s run by Jews and he said the wrong thing because he’s actually bitten the hand that I guess has fed him—and doesn’t need to feed him anymore because he’s got enough dough.

Oldman actually says later in the interview that he knows he sounds like a bigot, which he claims he's not. I'm pretty sure he's just a slightly self-aware bigot, and that's not exactly any better. And then there's this:

At the Oscars, if you didn’t vote for 12 Years a Slave you were a racist. You have to be very careful about what you say. I do have particular views and opinions that most of this town doesn’t share, but it’s not like I’m a fascist or a racist. There’s nothing like that in my history.

Oldman is confusing candidness with a productive dialogue, but the only thing Oldman's comments do is fuel hate and anger. There's no positive change that can come from being pissed off that people aren't cool with racial or anti-Semitic slurs. And while Oldman may say that not voting for 12 Years a Slave would make you a "racist" in the eyes of Hollywood, stating that the only reason the film won was because of some sort of political or racial control is inherently biased.

Oldman may think that he's a beacon of honesty and "real talk," but he's just another guy who doesn't get it.