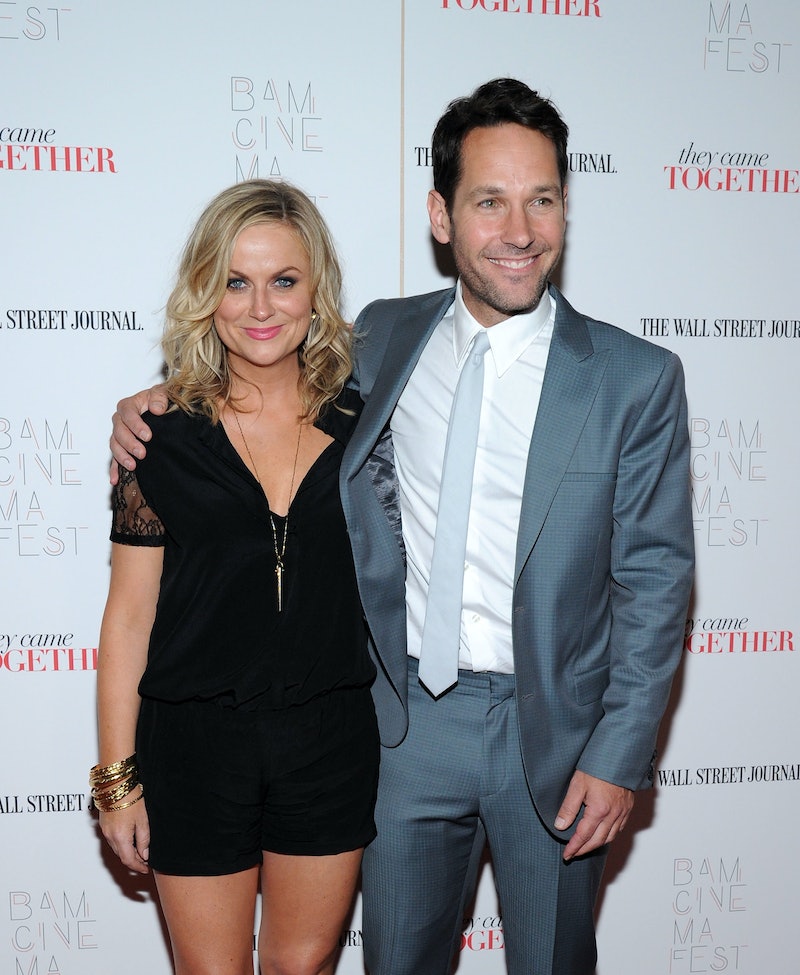 Whether you absolutely hate romantic comedies and would never choose to see one or think they’re the best type of movie out there, you’re going to love They Came Together . Starring Paul Rudd, Amy Poehler, and a whole bunch of other funny people, the comedy is a rom-com spoof, taking the genre’s most overused tropes and taking them to hilarious extremes. It should come as no surprise that the movie is a perfect parody, as it was co-written by Michael Showalter and David Wain (who also directed the movie), the same pair behind Wet Hot American Summer. At the New York premiere of They Came Together, Bustle caught up with Amy Poehler and some of the film’s other stars to see which tired rom-com tropes they were particularly excited to poke fun at.

There are a lot to choose from. From the meet-cute to the group of basketball-playing, advice-spewing bros, They Came Together mocks it all, and everyone we talked to had a different trope they were ready to make us laugh at—and because like Leslie Knope, she's an overachiever, Poehler had two. Here's what she and the other actors had to say.

"Oh god, there are so many," Poehler says. "I think the girl who like is really particular about what she orders, I think that’s a funny one. Like she’s really quirky, and she likes her food a specific way. We do a lot of that in the film.” Not to spoil anything, but she's right about that. Her character, Molly, has some very specific muffin preferences and makes sure she gets what she wants.

After the film's premiere, during a Q&A with the cast, another reporter asked Poehler what rom-com tropes specifically relating to women she hated. Poehler recalls another particularly irritating characteristic of the genre, that "women are always saving themselves for 'the one'... There should be more casual sex," she laughs. They Came Together sort of does both, letting Molly be the stereotypical rom-com protagonist looking for her soulmate, but making sure she meets a few other potential guys along the way.

For Rudd, it was much harder to come up with a trope that he was excited to make fun of, because he really does enjoy romantic comedies. "I wasn't looking at it like, ‘oh here we go, let’s get ready to skewer romantic comedies,'" he says. "I really didn't think of it like that or approach it like that."

However there were some unique bits in the film that Rudd liked more than others. "I really enjoyed the argument that I had with Max [Greenfield], it gets super serious all of a sudden, for no reason," he says. "That kind of stuff just makes me laugh, that’s not really even a romantic comedy trope, that’s just weird." It was that weird-in-a-good-way tone that Rudd loved most about the film.

In addition to directing and co-writing They Came Together, Wain also appears in the movie, and there's one trope he was so eager to mock, it's pretty much all he could talk about at the premiere. "One of the things that I find the most annoying, which I’ve taken as my siren call for this movie, is the notion that New York is another character in the movie," he tells me at the premiere's red carpet.

He sarcastically ensured the audience before the screening that in addition to Rudd and Poehler, New York City plays one of the film’s most crucial roles. And if that wasn’t enough emphasis, They Came Together contains several hysterically over-the-top references to the city. So if there’s one thing you get out of this movie, it’s that there’s nothing rom-coms love more than New York City, and nothing Wain loves more about rom-coms.

Kemper might play one of the characters who makes the most jokes about New York, but she has her own romantic comedy pet peeve. "One that I didn’t have a hand in making fun of, but that I was excited to see in the movie, is the all-competent, sort of all-knowing best friend, who sort of has it all together and is so busy and is really trying to help," she says. "You know, the professionally successful friend who’s trying to help out the klutz, the bumbling main character. I hate that, I don’t know why they both can’t have problems."

The former Office star was probably relieved that her character, Karen, though a friend of main character Molly, certainly wasn't all-competent. No spoilers, but let's just say Karen and her husband Kyle, played by Bill Hader, aren't exactly the world's happiest couple.

That's one of the great things about the movie, nothing's the way it would be in a traditional rom-com. Something's always off, sometimes even just a little, but the result is funnier than any straightforward romantic comedy could ever hope to be.

They Came Together opens in select theaters and On Demand on Friday, June 27.