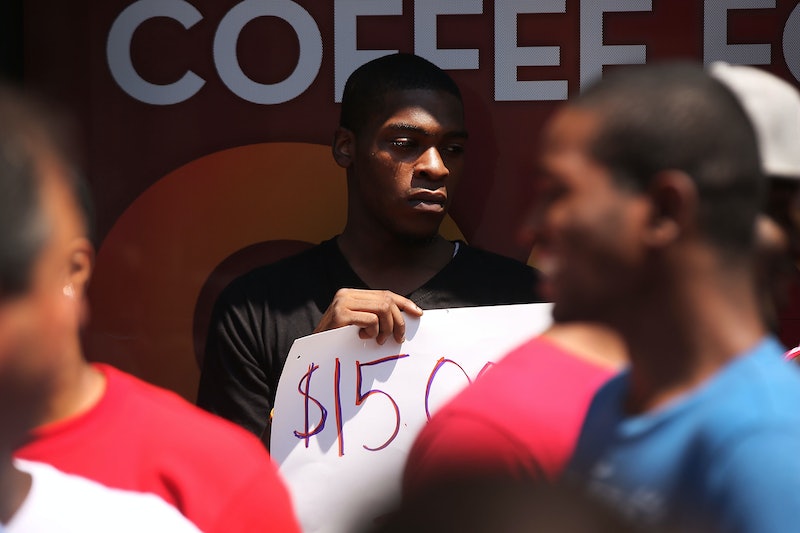 Americans will pay attention when we're pinched where it hurts: Cheeseburgers.

Fast-food workers who stepped out of the kitchen and into the proverbial picket line this week may not win the $15 an hour salaries they've been fighting for, but this year of escalating protests has managed to launch an unprecedented and unexpected conversation about the industry.

Set against backdrops of some of the most economically depressed cities in the country, these single-day walkouts in Detroit, Flint, St. Louis, Milwaukee, Kansas City, Chicago and New York have raised the question: How effective are organized protests without organized labor behind them?

As a New York Times article this morning points out, none of America's more than 200,000-plus fast-food restaurants are unionized. Though they have support from the broader Service Employees International Union (which has invested millions of dollars into the campaign) these protests carry more of an Occupy Wall Street flavor than your typical labor battle.

For decades, fast food employees have essentially been unorganizable in any traditional sense, thanks in part to two factors: extremely high turnover and the industry’s ownership structure.

The National Restaurant Association estimates that “quick-service restaurants” (a.k.a. fast food) have 75% employee turnover rates, meaning that three-quarters of its workers are completely new, year in and year out. Many fast food restaurants are also owned by franchisees, which can complicate things for workers seeking employer concessions. While often responsible for determining employee wages, franchise owners are still held on a tight leash by the companies themselves in terms of what they can pay. Those factors have largely prevented even the most basic efforts to unionize within the industry, which in turn has kept wages low.

So, what's different about these strikes? They're targeting multiple franchises, in multiple cities, all at the same time. Fast-food also isn't the only industry in question, either. Workers at other types of retail chains – think Victoria's Secret, Dollar Tree, and Macy's – have also joined the call for $15/hour wages.

Mobilizing workers at hundreds of outlets at a time carries more of a PR punch than an actually pragmatic agenda. The strikes have been designed to elicit some basic mathematical thinking: Can a worker actually live on a minimum wage salary? Dozens of strikers interviewed by media outlets across the country say no, telling personal stories about out-of-reach college tuition and the rising costs of raising a family. These strikes could influence the national government as it debates labor laws, or, perhaps, cause enough of a disruption to force action by each individual chain.

Or, the strikes could do very little: There's the looming threat of restaurant retaliation. Labor is one of the biggest costs in the retail industry, but chains could threaten to switch to an automated ordering system, where customers would use touch-pads to order rather than speaking to humans.