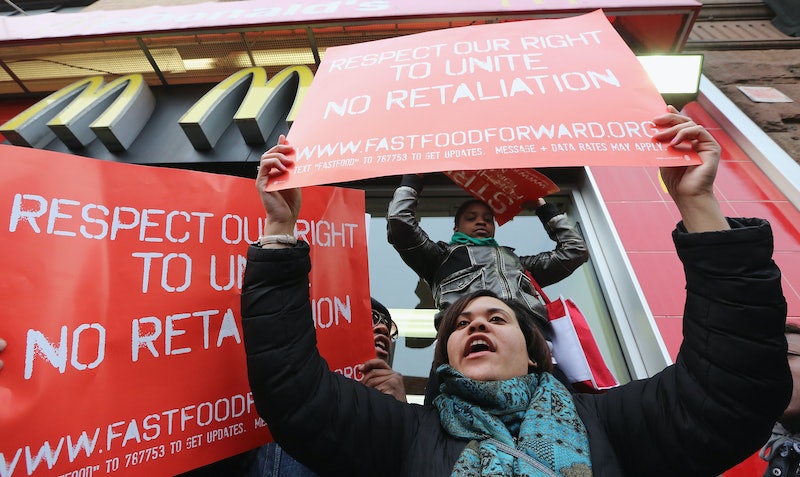 Just because you work two jobs, that doesn't mean you can tuck away any savings; buy proper healthcare or internet; or even to heat your house.

These are just some of the disturbing findings gaining attention since McDonald's teamed up with Visa to create a sample budget for workers at McDonald's restaurants. Ironically, the website was meant to show how easy it is to live off minimum wage.

What's plain to see, however, is that the lifestyle they recommend would be a daily struggle for even the thriftiest employees.

The sample paycheck the website provides expects workers to put in over 70 hours of work a week (at the same time as many fast food employers are actually cutting back on full-time employee hours in order to avoid paying for Obamacare benefits). The budget McDonald's suggests wildly underestimates most expenses, and leaves several important spending categories out altogether.

Sure, this situation might be manageable if you're a high school student still living with your parents. But what about the many McDonald's workers who have families to take care of, or those who are getting old enough to retire? Forbes interviewed one employee who is all too familiar with the difficulty of getting by on this kind of paycheck: With an hourly wage of $7.35, her monthly paycheck is less than the cost of her rent. Feeding her four kids — even with food stamps — is nearly impossible.

A New York Times investigation released earlier this month revealed that many fast food workers often find hours missing from their paychecks, and are denied even a single paid sick day. On top of that, McDonald's has recently begun to pay its workers using a new Visa payroll card system, which forces users to pay unnecessary fees in order to access their own wages, angering employees and lawmakers alike.

Meanwhile, McDonald's CEO Don Thompson took home a compensation package of $13.8 million in 2012. In that same year, the company's ex-CEO Jim Skinner collected $27.7 million on his way out the door.

And because sometimes you have to laugh to keep from crying, here's a comic strip satirizing the issue from the New York Times' Brian McFadden: