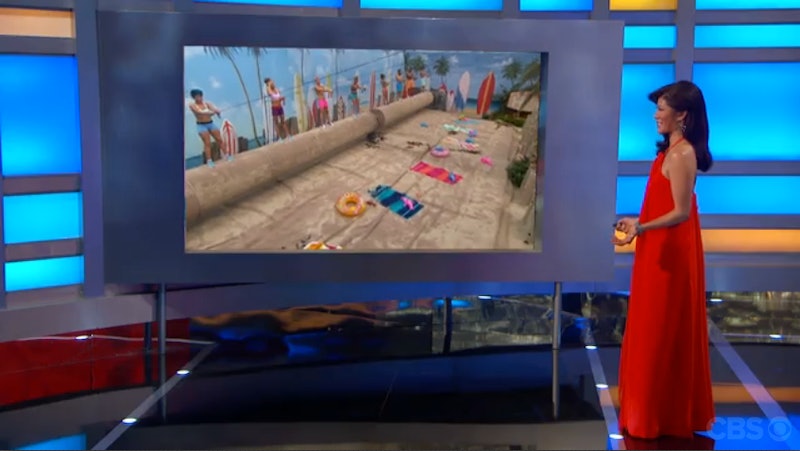 Ah, summer. Warmer temperatures, barbecues, and days spent at the beach (or rather, days you were supposed to spend at the beach, but actually spent binge-watching TV on Netflix instead). But let's not forget about summer's most important institution: Big Brother . Yes, after premiering in 2000, Big Brother is still going strong today heading into Season 16 on Wednesday night. We've got a whole new cast of characters to love, hate, and make fun of, some major new twists to the show, and the return of the always-lovely Julie Chen to our primetime viewing. Who could ask for anything more?

Well with that tantalizing intro, you could probably ask how you're going to watch all the drama unfold. We have already established that it's summer, after all, and having newfound free time just means more time to fill with activities, from your summer job to vacation to finally reading all the books you've saved on your Kindle the entire year. Even though you'd love to cool off from your day in the sun by chilling out in front of the TV every night, recognize that you're probably going to be busy and will need to catch up on this vital television programming at a later date.

You've picked possibly the best and worst reality show to watch later. On the one hand, Big Brother was an early adopter of integrating the Internet into the TV viewing experience. Since the beginning, the series has always made available live streaming of the houseguests' adventures on the Internet to complement or supplement the CBS broadcast. However, with three episodes airing a week, which will come to about 35 episodes by the end of the season, it's going to be extra-hard to catch up if you miss a couple.

Now that you know to "expect the unexpected," we've gathered up your options for later viewings of Big Brother so you can have the best summer ever. Or at least a better-than-mediocre one.

Hope That it's Free to Stream

Many of CBS' shows are available for viewing on CBS.com in their entirety for free the day after the episode airs, so it's likely that Big Brother will receive the same treatment. If for some reason that's not the case, stock up on Season 7, the All-Stars season, which is streaming on CBS.com right now in full.

Hit Up a Pay-for-Streaming Service

If CBS has a change of heart, you'll probably be able to snag the episodes from iTunes or Amazon Instant Video. The previous season of Big Brother is available from these fine retailers right now for $1.99 for each episode, so Season 16's episodes will probably pop up in these places the day after they air, too.

If you subscribe to a magical cable provider, then there's a chance you'll be able to watch Big Brother On Demand for free. Well, it's more like you're already paying for it, but it hurts less when you think it's an added bonus. CBS usually makes its shows available On Demand, but be sure to check back with your cable provider the day after the premiere to see if your dreams have come true.

I Want My Big Brother TV!

If Big Brother is more of a way of life for you than just a reality show, then you might want to consider subscribing to the Live Feeds. As the name suggests, you'll get to spy on the houseguests 24/7 and see close to everything they do, especially the stuff they don't show during the CBS broadcast (Nudity! Curse words! Human decency!). If you wanted, you could probably also use the Live Feeds as a catch-up tool, since the houseguests are sure to be talking about their latest wheelings and dealings so much that you'll be up-to-date on the goings on in no time.

Don't Sleep Until the Summer is Over

Break Into the Big Brother House

Maybe you could sneak into the Big Brother abode through the food storage room a la Orange is the New Black? Or come in disguised as the Zingbot?