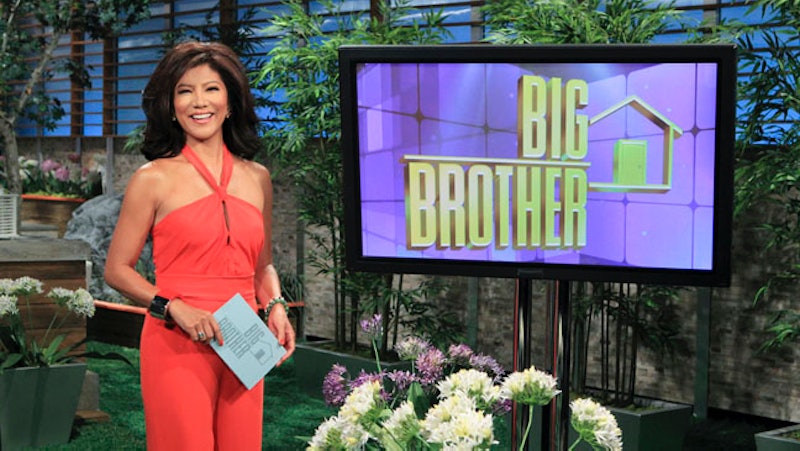 About six months ago, I seriously considered auditioning for Big Brother 16. That's not to say I seriously considered joining the cast of Big Brother 16, should I have been chosen, but I did seriously consider auditioning. Eventually, I chickened out — after all, I wouldn't want to deal with being chased down an L.A. Freeway with a liquid metal Chenbot on my tail had I been accepted and refused. (That said, it's unlikely I would have made the cut, since I have a face for radio and an inflated sense of self-importance. Also, I'm not a D-cup.) So cheers to these 16 people who did audition and joined the Big Brother 16 cast. We know little about them now, but, in just a few weeks, we'll have decided who we love, who we hate, and who will end up masturbating in the Big Brother 16 shower.

But, before Big Brother 16 premieres on June 25, with a new twist that will see two Head of Households and four up for eviction each week, let's do what we Big Brother fans do best: Judge people we've never met. How does the new cast stack up? Let's begin.

She'll Win Because: Based on her profile, the Knoxville, Tennessee native could be quite the competitor in the house. In her spare time, she likes to "hike, kayak, rock climb, yoga, spelunking, horseback riding, write, late night cow tipping, skinny dipping, streaking, prank calling, playing in Wal-Mart, dirt bikes and skeet shooting." And we're pretty sure Big Brother would boast one challenge this season that combines all of those things.

She'll Lose Because: Despite all the cool shit above, she still suffers from bimbo-itis, based on this quote about her favorite Big Brother 15 contestant, Howard: "At the end of the day this is a game, I just like pretty people!" Also, she's an avid karaoke-fan.

Most Likely To: Sing the loudest during a round of "Happy Birthday" for a fellow houseguest, in an attempt to get someone to compliment her voice. Also most likely to tearfully slink into the confessional after no one compliments her voice.

She'll Win Because: The Californian could win likable votes from her fellow houseguests — the event coordinator says her life sentence is "to live, to love, and to repeat it daily." Could she be the next Jordan?

She'll Lose Because: Keeping your eye on the game when you're focused on what's at home is difficult. As Brittany says in her bio, "I've never gone longer than a weekend without my kids let alone months of not seeing them or talking with them. The same goes for my family. We’re a very tight knit family so that’s going to be a challenge for me." Also, Big Brother is bound to expose Brittany's fear of heights for our TV pleasure at some point.

Most Likely To: Ask fellow houseguests to throw the Head of Household competition for her so she can read a letter from her kids.

He'll Lose Because: This line turns him into another Justin Bieber: "Throwing a sexy girl that likes me under the bus will be hard but I will do what I have to do, so kiss me, lay with me, have sex with me, tell me you love me, I’m still in it to win." Also, the Big Brother winner he looks up to is the piece of cardboard that was Hayden? Really?!

Most Likely To: Be the first person to comment on Paola's boobs.

She'll Win Because: The Tucson, Arizona native is a Big Brother super fan with a personality matching Helen's ("I plan on being nice and having everyone confide in me to get information from all over the house."), but with the game mindset of Mike Boogie. ("I don't want to play both sides of the house, but I'm not saying I won't.") Also, she's in this to truly win — the contestant doesn't want Big Brother to make her famous, but to help her lock a fruitful career as a casting director.

She'll Lose Because: She "doesn't want to clean up everyone's messes." That sounds like a kitchen fight waiting to happen.

Most Likely To: Spend an afternoon stroking Brittany's hair while she sobs.

He'll Win Because: The Hackensack, N.J. sales executive is in this for the long haul — he'll do whatever it takes to become a notable player, because, as he says, he wants to "try and get back onto another season!"

He'll Lose Because: Thinking is hard. On his strategy: "Thinking about all the different ways to get to the end is enough to make my head explode!"

Most Likely To: Win a Mitch Buchannon lookalike contest.

He'll Win Because: The Providence, Rhode Island-based police officer compares himself to Big Brother MVP Dan Gheesling, and is ready to be ruthless: "My strategy involves three phases. First, attempt to find common interests with as many houseguests as I can, while developing a profile on them. Second, start using the facts I learned about the houseguests against them. Finally, if I’m able to win a few HOH's/POV's late in the game, I can make some moves that will determine the winner." Of course, that strategy will only be useful if he can find a fellow contestant with common interests. See those below.

He'll Lose Because: It's really hard to not be concerned about a police officer who says, "I am a big fan of guns and enjoy modifying and shooting them; I get to use most of them at work." Feel safe, Providence?

Most Likely To: Talk about his guns and then really scare people with his favorite life motto: "Dream as if you'll live forever. Live as if you'll die today."

He'll Win Because: Not only is the former professional baseball player extremely athletic (he previously played for the St. Louis Cardinals), but he also knows that the worst thing for a former professional baseball player to do on Big Brother is to come out swinging: "You have to rule very politically if you’re at the top so it may be beneficial to lay low in the weeds until the final five."

He'll Lose Because: It will be hard for him to lay low once he's on slop, since "Grumpy Devin comes about when food is not available."

Most Likely To: Find himself on a hammock with three female houseguests.

He'll Win Because: The Duck Dynasty lookalike from Albemarle, North Carolina will bring small-town charm to the game. Not only will he attempt to "befriend all," but he also claims he's "funny and witty." Plus, who wants to oust the school groundskeeper when there's a professional baseball player to get out first?

He'll Lose Because: The man looked up to Big Brother 15's Spencer, labeling the homophobe and misogynist "a likable person that I could relate to." Sigh, we're doing this again?

Most Likely To: Find himself in a conversation about guns with Derrick.

He'll Win Because: Considering the Boca Raton native is a "YouTube Personality," he knows how to attract people. Also, as Ariana Grande's brother (!), he knows how to fill his hair with secrets. A must in the Big Brother game.

He'll Lose Because: His desire to be famous — he wants his personality to be "on an even bigger scale with worldwide reach, bigger shows and bigger tours" — combined with his love for twerking will lead to irritating antics that will get old fast.

Most Likely To: Claim he doesn't want anyone to learn of his famous connection, then name drop his "sister, Ariana" until people notice anyway.

He'll Win Because: The pedicab driver's is Big Brother 12 winner Hayden Moss, with one tiny tweak.

He'll Lose Because: The pedicab driver's is Big Brother 12 winner Hayden Moss, with one tiny tweak. Houseguests will want that out of the house quickly.

Most Likely To: Name his all-dude alliance "Brohemian Rhapsody."

She'll Win Because: Who wants to incur the wrath of God by sending home a minister? Plus, she looks up to Rachel Reilly, so, clearly, the woman is accepting enough to spread her net wide.

She'll Lose Because: She'll admit to looking up to Rachel Reilly.

Most Likely To: Credit God for helping her escape eviction, making Him uncomfortable since he was really, like, vibe-ing with Hayden's game, awkward.

She'll Win Because: As the makeup artist says, she's come "to the conclusion that I'm a good person to others."

Most Likely To: She'll be evacuated for a medical emergency first. "I guess I won't be pooping for 3 months." (As much as I'd like to leave it at that, context here.)

She'll Win Because: The nursing school graduate is a self-professed nerd with the looks of a "nerd" in a '90s teen rom-com. A great way to fly under the radar (until she takes her glasses off, of course).

She'll Lose Because: She wants to win the first Head of Household, a move that would most definitely put the target on her back.

Most Likely To: Dropping words like "tachycardia" in her interview means she'll definitely win the spelling veto competition.

She'll Win Because: The DJ owns swords and numchucks. I guess that's cool.

She'll Lose Because: With no firm strategy — or, based on her interview, personality — Paola will ride a floater status straight into Top 6, but no more. Plus, if her only goal is to "gain more social media followers," girl doesn't have too high of aspirations here.

Most Likely To: Use the word "hashtag" before expressing every emotion. "I'm up for nomination? Hashtag, bummer!"

She'll Win Because: The Florida-based photographer will aggressively brandish her sexuality in order to win, which could allow her to steamroll over folks like Caleb: "I don’t take no for an answer. I will manipulate people with my looks; I am very strategic and always get what I want."

Most Likely To: Claim that Amber doesn't like her because she's pretty.

He'll Win Because: The Economics major has his eye on the prize (his life's motto is "money over everything") and his borderline unhealthy obsession with golf means he can ensure Big Brother boredom much longer than his fellow competitors.

Most Likely To: Star as Cody on Step By Step.

More like this
'Big Brother' Is Already Looking For New Houseguests To Compete In Season 25
By Brad Witter
'RHOSLC’s Newest Cast Member Has Tried To Become A Housewife Before
By Jake Viswanath
Here’s What Went Down Between Romeo, Jill, & Kira Before 'Bachelor In Paradise'
By Grace Wehniainen
Why Did Lace's Fake Her Birthday On 'Bachelor In Paradise'?
By Kadin Burnett
Get Even More From Bustle — Sign Up For The Newsletter