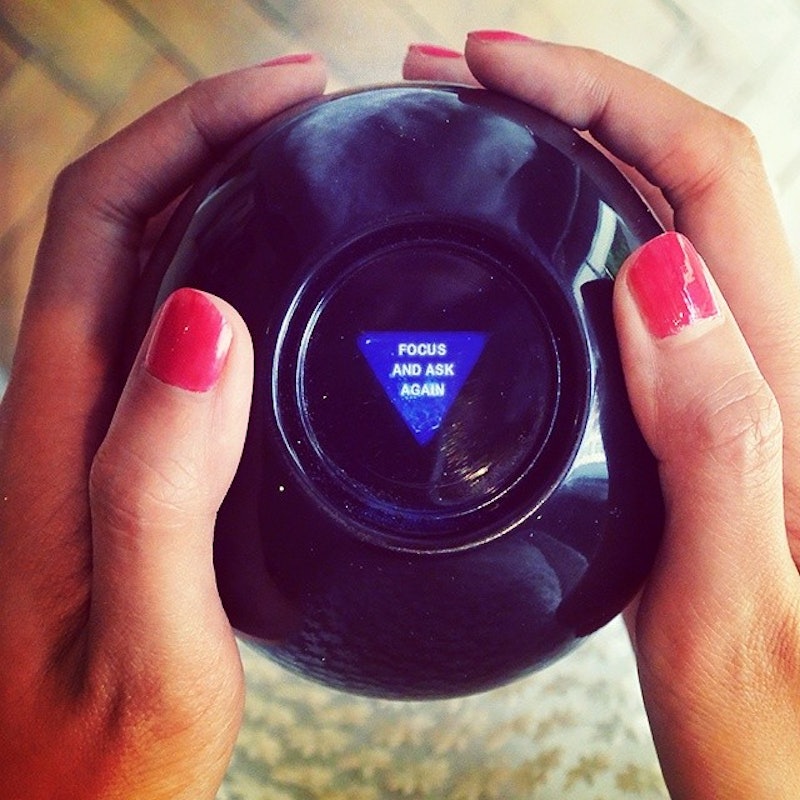 I don’t know what it is, but when kids reach a certain age, they become fascinated by all things supernatural. Before the days of sparkly vampires and brooding, conflicted werewolves, though, we tended to put our focus elsewhere — namely, on trying to predict the future. We’ve all got memories of playing games like MASH with a bunch of friends at recess or during sleepovers, wondering whether we’d end up living in a mansion and married to our childhood crushes or holed up in a shack with that kid we absolutely couldn’t stand right? I’m pretty sure most of us have ended up having drastically different adult lives than our younger selves predicted — so in honor of Throwback Thursday, let’s take a second to check in with our favorite, completely inaccurate divination methods. Will you meet a tall, dark stranger or win the lottery? Only time will tell!

Back in middle school, we used to buy these for 25 cents at the little table in the cafeteria that sold novelty erasers and other mostly useless school supplies. Unfortunately the fish were about as useless for predicting the future as those little grape-shaped erasers were for fixing your homework. They are, however, a pretty neat chemistry experiment: Their active ingredient, you see, is sodium polyacrylate, which grabs onto any water molecule it touches, changing the shape of the molecule in the process. As the molecules change shape, so do the fish. Guess what happens when the fish hits your hand? You guessed it: Water galore.

The year I turned 13, every single paper fortune teller I made had “You will be bitten by a rabid fox” as one of the possible outcomes. It was actually a very real threat; at one point that year, we were informed via a very serious school assembly that there was a rabid fox loose on campus and that we were not, under any circumstances, to venture down near the river where it was spotted. Also, I was an odd child. Granted, I grew up into an odd adult, too, but… whatever.

Let’s do a little experiment, shall we? Here, I have painstakingly recreated what my typical MASH page looked like when I was about 12 years old. Let’s see how my actual adult life measures up to the one my tween self thought I’d have: Apparently I’m supposed to be living in a mansion, married to David Boreanaz, driving a Ford Focus (really?), writing for a living, located in Boston, with eight kids (yikes!) and a parakeet for a pet. The only one of these things that has actually come true is the fact that I’m a writer. Let’s walk through it step by step:

First, housing. It’s probably good that I live in an apartment and not a mansion; although we pretty much all tried to rig the game as much as possible so that we’d end up in a house or mansion, clearly my younger self had never heard of a little thing called “property tax.”

Second, life partners. My friends and I tended to use celebrities instead of boys we actually knew in the “life partner” category; throughout the late ‘90s, mine were full of actors from Buffy the Vampire Slayer and the frontmen of the broody, slightly-alternative-but-mostly-pop bands I thought I was supposed to listen to at that age. Oh, and Chris O’Donnell. I had a huge thing for Chris O’Donnell post-Batman Forever. Obviously I am neither dating nor married to any of these people; actually, I’m not married at all, but I am in a happy, long-term relationship, so I think I win here. Sorry, Chris.

Third, cars. The cars I listed usually depended on whatever models were being heavily advertised at the time; maybe this explains why a) I ended up with a Ford Focus this time, and b) every MASH page I made circa 1997 had at least one Kia on it. The funny thing is, I haven’t actually owned a car for any of my adult life: I’ve lived in New York for most of it, which means I definitely didn’t need one. Even after moving to the ‘burbs a year ago, though, my SO and I get on just fine with one car (his) between the two of us. For the curious, it’s a Honda Civic.

As for kids? Uh, no thanks. Or at least, not right now. Thank goodness I didn’t end up as Kate Gosselin. That would have been horrible. Pets, though, I can deal with; I may not have a hedgehog, but I have two cats and I love them to pieces.

Lastly, location. I grew up around Boston, so it usually managed to make its way into the “places you’ll live” list. Although I’m in a totally different place at the moment (oh, New Jersey. Never change), I did spend a significant amount of time everywhere on this particular list besides Paris. I still haven’t been; it’s on my bucket list, though!

There are some who believe that all Ouijia Boards are full of badness and should never, ever be let loose inside your home. I am not one of them, as I find it difficult to believe that something made mostly of plastic and manufactured by Parker Brothers is inherently evil. To be fair, Ouija Boards do have a long and colorful history; a form of automatic writing, it first pops up in Chinese historical documents dating back to 1100 AD. Planchettes — the little thing that moves around the board to indicate answers to your deepest, darkest questions — began being sold as a novelty in the late 19th century, with the Ouija Board as we know it today coming into existence around 1901. Parker Brothers bought the business from William Fuld’s estate in 1966, and they (and, by extension, Hasbro) has manufactured them ever since.

The most exciting thing my friends and I ever got out of mine was the supposed knowledge that the kid who lived at the end of my block had an enormous crush on one of us, but given that we learned later that the boy in question used a different last name than we thought he did… well… let’s just say the information was somewhat suspect.

The Magic 8 Ball itself didn’t come into existence until the ‘50s, but its functional component was invented in the ‘40s by a guy named Albert C. Carter. Carter’s mother, Mary, had been an alleged clairvoyant; the device that would become first the Syco-Seer and then the Magic 8 Ball was inspired by a spirit writing device she used.

Your average Magic 8 Ball was 20 possible answers trapped within its watery depths; according to the coupon collector’s problem in probability theory, it takes about 72 outcomes for all 20 answers to appear at least once. The best part? If it gives you an answer you don’t like, you can always shake it again until something more to your taste comes up. Rigged games FTW!

Although I don’t think anyone actually likes them, the most exciting part about ordering Chinese takeout when we were kids were undoubtedly the eight million fortune cookies included in each order. They kind of lose their appeal the older you get, though; I went to an Asian fusion place for dinner on Monday night, and the all-you-can-eat sushi I got was way more exciting than the cookies. I didn’t actually end up cracking mine open until yesterday, but here’s what it said:

They’re really more like proverb cookies, aren’t they? But hey, at least this one also decided to teach me how to say “pork” in Chinese:

Did anyone else go through a tarot card phase when they were younger? I still have my pack somewhere — I think it’s in storage at my parents’ house. Like most of the best fortune telling methods we pulled out at all our sleepover parties as kids, what made tarot cards fun was the whole story you could weave around the meaning of the cards —otherwise known as the art of cold reading someone. Come to think of it, this is how con artists swindle poor, unsuspecting rubes, isn’t it? Clearly anyone who was into tarot was on a path set for delinquency. Or something.

Oh man. I really wanted an Ask Zandar growing up, but alas, it was not to be. A board game manufactured by Milton Bradley in 1992, Ask Zandar was basically a slightly higher tech, battery-powered version of a Magic 8 Ball. From what I recall, the game play involved reading questions aloud to Zandar, trying to guess what he’d answer, then waving your hand over his crystal ball to find out if you were right. If you won, Zandar would read your fortune for you. I suspect he was named Zandar to capitalize off of Zoltar, the carnival fortune telling machine from Big. Fun fact: If you have enough money to burn, you can buy your very own, custom Zoltar!

More like this
Andie From 'How To Lose A Guy In 10 Days' Is A Total Gemini
By Nina Kahn
Jennifer Lopez & Ben Affleck’s Officiant Spilled The Tea On Their Wedding
By Sophie McEvoy
Taylor Lautner Thought Taylor Swift's 2009 VMAs Interruption Was A "Skit"
By Alyssa Lapid
Reese Witherspoon Confirms This Fan Favorite Will Return For 'Legally Blonde 3'
By Jake Viswanath
Get Even More From Bustle — Sign Up For The Newsletter
From hair trends to relationship advice, our daily newsletter has everything you need to sound like a person who’s on TikTok, even if you aren’t.