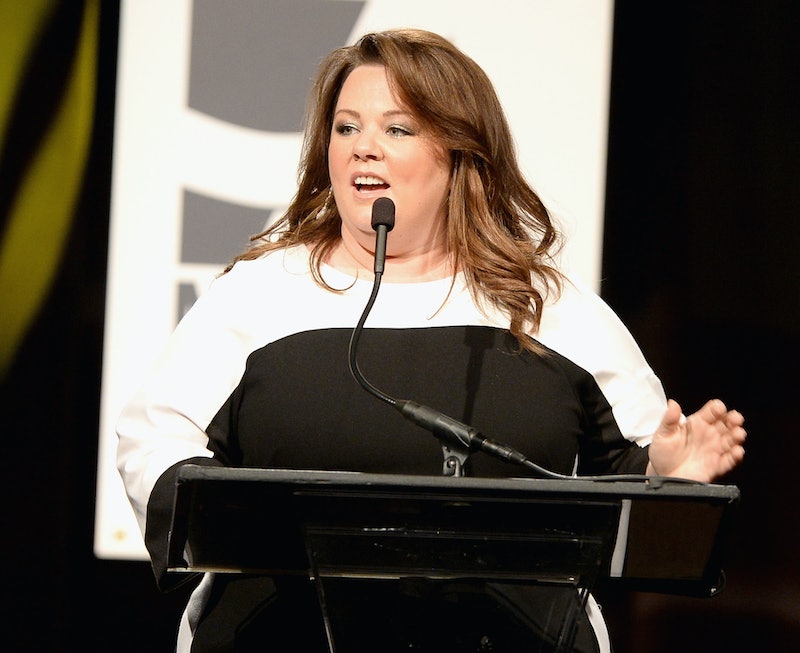 Melissa McCarthy may play the funny lady onscreen, but offscreen, she's... well, she's equally as funny, actually. But in between the jokes, McCarthy is also one hell of a smart, inspiring celebrity. In her candid interview with People , McCarthy admits she "would do anything for a laugh," but that isn't the only thing that defines her. She's one of the most confident actresses out there, and it's easy to love her for it, but even the most confident actress on the planet knows that criticism can suck. McCarthy's faced plenty of her own, and here's what she has to say about it:

I've never felt like I needed to change... I've always thought, "If you want somebody different, pick somebody else." But sure, criticism can sometimes still get to me. Some things are so malicious, they knock the wind out of you.

She also told People that while she's embraced confidence as she's gotten older, her 20s were not exactly the most confident time in her life.

McCarthy has left tears (mostly) behind, and, instead, is working on making people laugh. Her newest film, Tammy , hits theaters July 2, and from the look of the new trailer, she will deliver the same craziness she showed us in The Heat and Bridesmaids. But until then, here are some words of wisdom from the funny woman herself.

McCarthy On Being Called "America's Plus Sized Sweetheart"

It's like I'm managing to achieve all this success in spite of my affliction ... Would you ever put that in the headline for a male star?

Uh, no, no you would not. Unless I missed when we started separating actors into the same gross categories, they're still allowed to be referred to by something other than their BMI.

McCarthy On That Nasty Review in The New York Observer

Film critic for the New York Observer Rex Reed called McCarthy "tractor-sized" and a "gimmick comedian who has devoted her short career to being obese and obnoxious with equal success," in his review for her film Identity Thief, proving that some film critics should really freelance as playground bullies. Luckily, McCarthy stayed classy as ever and responded to the mean comments in her interview with The New York Times, stating:

I felt really bad for someone who is swimming in so much hate. I just thought, that’s someone who’s in a really bad spot, and I am in such a happy spot. I laugh my head off every day with my husband and my kids who are mooning me and singing me songs.

Pretty much everyone I know, no matter what size, is trying some system. Even when someone gets to looking like she should be so proud of herself, instead she's like, "I could be another three pounds less; I could be a little taller and have bigger lips." Where does it end?

On Being a "Work In Progress"

One, let's give McCarthy's character in Bridesmaids a mini applause for the awesome advice above. McCarthy herself knows that there is no point in throwing yourself a pity party. Here's what she had to say about it to More Magazine :

I've been every size in the world. Parts of my 20s, I was in great shape, but I didn't appreciate it. If I was a 6 or an 8, I thought, "Why aren't I a 2 or a 4?" Now I feel like I have two great kids and the dreamiest husband on the planet, and everything else is just a work in progress.

Thanks for being the best work in progress we know, McCarthy.