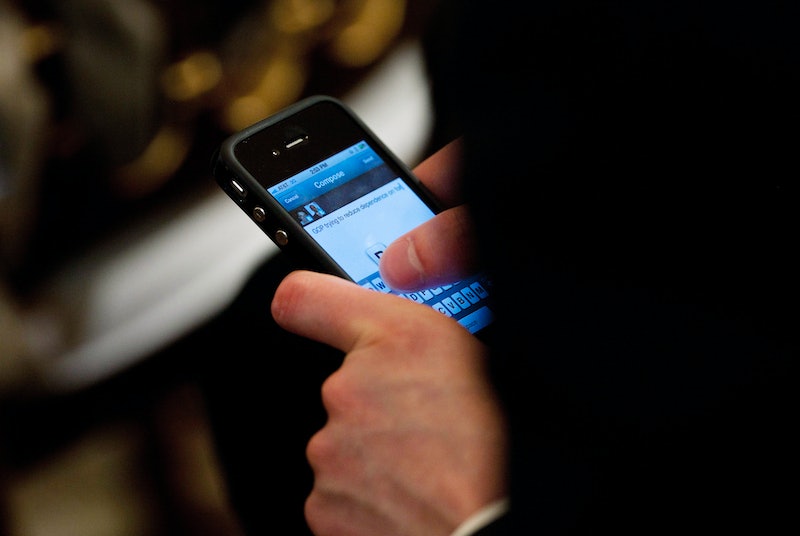 From street harassment to unsolicited dick pics, it seems like guys everywhere feel totally comfortable announcing their sexual opinions and desires to women, whether those women expressed any remote interest or not. Women have been pushing back a lot lately, from the #NotJustHello Twitter hashtag, to poster campaigns that draw attention to street harassment, to a Tumblr called Straight White Boys Texting that showcases the ways in which boys get sexual for no reason. And the site manages to compile all this without facepalming hard enough to cause brain damage.

The truth is the fact that so many guys feel totally entitled to get sexual at the drop of a hat is not all that funny, given all the real harm that can come out of that sense of entitlement. Still when you see so many examples of guys getting sexual with no provocation, it's also kind of...hilarious. I mean, these guys never, ever seem to get a positive response to their sexual comments. And while it sucks to be on the receiving end of this kind of thing, given that it can make you feel anything from exasperated to gross to downright unsafe, collect all these stories together, and it's hard not to laugh at the pattern.

Plus it totally changes the power dynamics involved, which carries with it a certain amount of vindictive pleasure. "Oh, you thought you could make people uncomfortable any time you feel like it without anyone knowing? That's cute."

Straight White Boys Texting has gotten some criticism for focusing on straight white boys, but as the blog's popularity has grown they've also started featuring texts from people who aren't straight white dudes (and featuring exchanges that aren't texting). Still, though it's hard to argue against the fact that when it comes to feeling entitled, straight white guys tend to be the worst offenders. It's the world we live in. Just check it out:

Dude, that's not autocorrect. And even if it was, if your autocorrect has learned to put in "have sex" that easily, that's even worse.

Trying to use science to get women to date you doesn't work as well as you think it might, huh?

Something tells me she won't ever be texting him back...

Sooner or later, there's always a dick pic. In this case, it's sooner. As in, out of nowhere and with no warning.

Damn that worked out nicely.

Even though this whole thing is ridiculous no matter how far apart the texts, I like to think that they really did happen within the space of an hour.

This one has some pretty thrilling sequels, too. It just keeps getting better.

Well this guys certainly wins for asshole of the year.

But this one is my favorite: