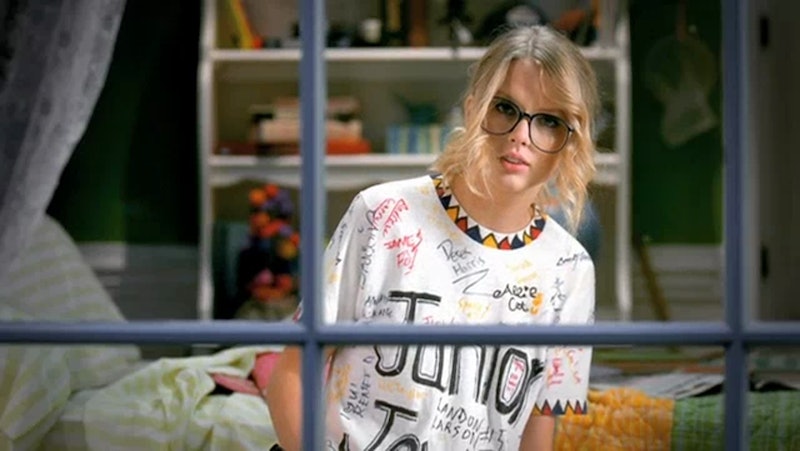 Whether you've been watching the show for seasons upon seasons or you're tuning in for the first time to find some ridiculous treehouse antics, Big Brother and its cast can be a bit overwhelming at first. There's the guy who used to play baseball; there's the dude who was a soccer player; there's Ariana Grande's brother and the lady DJ from Queens. But mostly importantly, there's once contestant on Big Brother 16 who looks rather familiar: Michigan girl Nicole Franzel is basically Taylor Swift in the "You Belong With Me" Video.

Look, this girl could turn around and become a total nightmare (I'm told that's how things go on this show), but at first glance, Nicole is a ridiculously innocent, doe-eyed young lady. To boot, she's got the long blonde locks, country-music approved sundress, coke-bottle black-framed glassed, and Swift's signature dumbfounded look. You know the one I'm talking about.

Sure, they're not an exact match, but if Swift's music video was to become an ABC Family sitcom — one with crazy bright lights and ridiculously colorful outfits that look like they came straight out of a Delia's catalog — Nicole Franzel would definitely be able to play the Swift part.

The resemblance is pretty damn uncanny:

Taylor Swift in "You Belong With Me":

She's Even Got The Obnoxious Post-Makeover Glam Look Thing Going:

More like this
Taylor Swift Wants To Direct A Movie Next — But You Might Have To Wait
By Radhika Menon
'Big Brother' Is Already Looking For New Houseguests To Compete In Season 25
By Brad Witter
Everything To Know About Taylor Swift’s 10th Studio Album, 'Midnights'
By Grace Wehniainen and Jake Viswanath
Jason Derulo Is Launching A New Singing Show In The UK
By Maxine Harrison
Get Even More From Bustle — Sign Up For The Newsletter