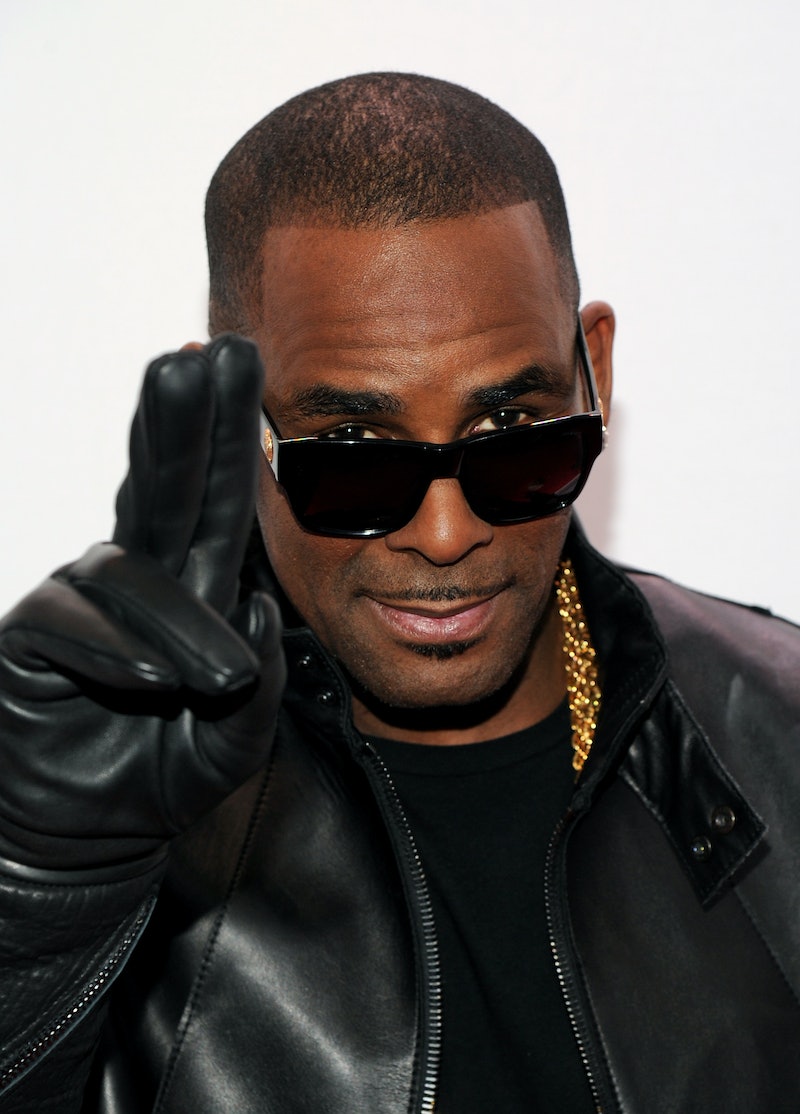 Earlier this month, R. Kelly’s son, Jay, came out as transgender on his Ask.fm account, and on Wednesday, Kelly publicly addressed his son’s statements. His comments, however, were ambiguous, at best. In an interview for Chicago’s WGCI radio, Kelly responded to the interviewer's questions about Jay with the following exchange:

Interviewer: There (are)... the reports of your daughter becoming... you know, your son...and would you like to address that? Because the blogs are saying that you're not addressing it. Would you like to do that while you're at home on JCI?

Kelly: Right, right. I would, if you don't mind me keeping it real.

Kelly: Okay, so, you don’t really want to open it up by saying my daughter is becoming my son, you know what I'm saying?

Kelly: Because if that were true --

Kelly: I know, I know, but, you know, don't even give the blogs that kind of credit, you know what I'm saying? Real talk. But as far as that's concerned, you know, always believe what you see - with your own eyes, that is. Always believe what you see. That's the best way to go about this business. You know, I've heard a lot of things about a lot of people, and it was never true, you know what I'm saying?

It is unclear which blogs and which comments Kelly was referring to. One possible reading of his statement would be that Kelly is dismissive of the interviewer and various blogs referring to his son as his daughter, or using female pronouns in reference to Jay, and that people should believe what they see from Jay himself. Conversely, one could read into Kelly’s comments that what is being said about Jay identifying as male is an unsubstantiated rumor, despite Jay’s own words, and that blogs reporting that Jay identifies as male are to be dismissed.

When I first became aware of the story, I had the latter interpretation, especially after seeing headlines about his reaction that contained the quote “Don’t call her my son." After listening to the interview, however, I am less sure of what Kelly's stance is. I did not hear that quote in the interview, but I hope that he is not in denial or insinuating that his son's identity is invalid.

It’s possible that I’m giving R. Kelly too much credit by even giving him the benefit of the doubt. R. Kelly is not exactly a sympathetic character, especially in light of the pedophelia charges, sex tapes, and the way he has portrayed sexuality in his albums, but for Jay’s sake, I hope that in this scenario, he is doing the right thing. I hope that he's affirming his son’s identity and stating that he respects Jay’s right to self-determination.

It does not seem that Jay’s decision to come out has strained their relationship (it was already a complicated one, according to Jay), and at the very least, Kelly made it known that he intended to continue to support Jay financially. Jay's mother, Andrea Kelly, has been explicitly supportive and affirming, and I’m very happy that he seems to have at least some level of support from his father.

On his Ask.fm account, one anonymous individual asked Jay, “Why are you all over the media?” His response? “Because i'm transgender and the son of r.kelly. I don't know why that is such a HUGE deal.” He’s right that it shouldn't be a big deal for an individual to come out as transgender, but in our society, it’s seen as a radical departure from the prescribed norm, and with a figure like R. Kelly being attached to the story, even tangentially, it is not at all surprising that Jay’s coming out would garner the kind of attention that it has.

What hasn't received enough attention, unfortunately, is how important it is for parents of transgender children to accept, affirm, and embrace their identities. In our society, for example, it is estimated that up to 40 percent of homeless youth are LGBT. Sixty-nine percent of the transgender youth who became homeless as a result of their gender identity attempt suicide. It’s a big deal whether or not R. Kelly supports his child not because he’s R. Kelly, but because it’s sadly common for parents to reject LGBT youth, especially trans youth, and it’s depressing that the absolute baseline of human decency — continuing to love and support your child regardless of his or her gender identity — is seen as something extraordinary rather than behavior we should expect of everyone.

As a trans woman who has a strong support network in her family, I have come to realize that I am immensely privileged. Even so, I can remember when I came out to my parents, not knowing whether or not they would accept me for who I was. I was terrified, especially because at the time, I relied on them for financial support. Fortunately, they were accepting and affirming, but I was lucky. Some of my close friends who are queer and/or transgender have had tempestuous relationships with their parents, who were far less supportive of their identities. Although they are now adults capable of providing for themselves, who don't rely on their parents' financial support to survive, it’s obvious that their parents’ distance and rejection hurts them, and it hurts me to see it. No one should be rejected by their parents for being who they are.

While I am glad that R. Kelly seems to want to support Jay financially and to provide for his future, it’s sad that we are tempted to valorize what any parent should do just because they're a parent: love their child for who they are.

At the end of the day, the story isn't about R. Kelly. It’s about Jay, and for his part, he seems to be confident and unashamed of who he is, as he should be. He’s inspiring others to be themselves, and that should be celebrated. Jay is defining himself on his own terms and living the life that he wants to live, and every child, queer or straight, cis or trans, should have the opportunity to do so. Let's celebrate Jay's victory in being true to himself and respect his independence and privacy going forward, regardless of what his father thinks. Hopefully, with time, it won’t be sensational for a parent to continue to love their queer and trans children even after they come out.