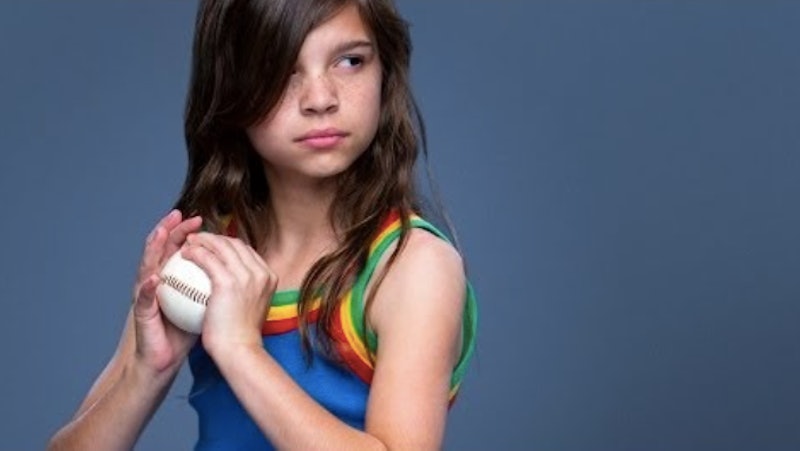 If you’ve ever described an action as being done “like a girl,” this video from Always might make you think twice about doing it again. Called “Like a Girl,” it draws attention to exactly what happens when you tell someone to do something like (surprise) a girl — and puts it in stark contrast to how girls themselves actually perform those actions.

Back in May of 2014, Always and its parent company, P&G, conducted a study surveying 1,300 American women between the ages of 16 and 24 years old, and the findings are striking: More than half of girls said they experienced a drop in confidence at puberty, and an overwhelming 89 percent agreed that words can be incredibly harmful for self-confidence. Only 19 percent had a positive association with the phrase “like a girl”— but more than half (57 percent) think there should be a movement to change the negative perception of the phrase.

That’s where this video comes in. Directed by documentarian and photographer Lauren Greenfield, it shows what happens when individuals are asked to do specific actions “like a girl.” At first, the responses are disheartening: Older girls and women asked to “run like a girl” flailed their arms, locked their knees together, and pasted big, silly grins on their faces. A boy asked to “fight like a girl” enacted a stereotypical cat fight. Everyone asked to “throw like a girl” stuck their elbows to their sides, put no energy behind the throw, and gave up easily.

But then came the actual girls — girls between the ages of five and 13. They gave the actions their all, running, fighting, throwing, and kicking with the best of them. One little girl when asked, “What does it mean to you when I say, ‘run like a girl?’” answered, “It means run as fast as you can.” Here, take a watch:

Said Greenfield about the video, “In my work as a documentarian, I have witnessed the confidence crisis among girls and the negative impact of stereotypes first-hand. When the words ‘like a girl’ are used to mean something bad, it is profoundly disempowering.” She continued, “I am proud to partner with Always to shed light on how this simple phrase can have a significant and long-lasting impact on girls and women. I am excited to be a part of the movement to redefine ‘like a girl’ into a positive affirmation.”

Always saw the results of their research — and decided they were done sitting idly by. “We felt strongly we needed to do something about it,” said Always Brand Director Amanda Hill to AdAge. “Really the goal is to turn the phrase ‘like a girl’ from being an insult to being a real compliment and a boost to self-confidence. We’re hoping we can really start a movement.”

That last part — the bit about starting a movement — is important. Like Pantene’s #NotSorry video, this isn’t just a campaign to sell products. I mean, yes, it is to an extent — but there’s more to it than it. It’s also raising awareness about the #LikeAGirl Movement, which aims to support girls and help them keep their confidence throughout adolescence and beyond, starting with showing that doing something #LikeAGirl is awesome. To that end, Always is partnering with UNESCO on a variety of literacy programs for girls and young women, supporting a puberty education program, working with the Ban Bossy movement, and providing safe spaces for girls to ask all the questions they have about growing up — and get some answers, too. I think there’s still much to be done (Always might think about starting something like Pantene’s Shine Strong Fund), but it’s a start, and an important first step.

So: What does the phrase “like a girl” mean to you now?