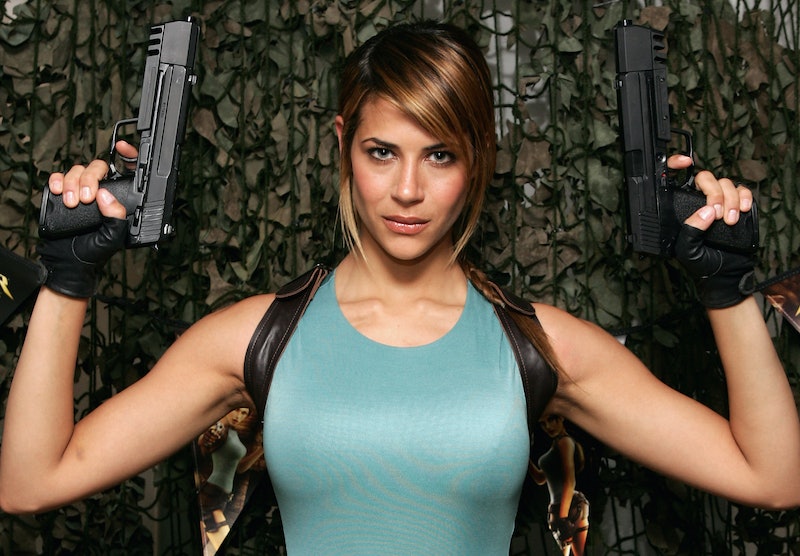 Yesterday, I wrote about The Boob Jam: a brand-new movement devoting to rethinking the way that women's breasts are represented in video games. Even as a non-gamer, I was totally intrigued by the concept. So, I contacted Jenn Frank, The Boob Jam's creator, to learn a little bit more about her motivation for creating the project, mammary-related controversy in the gaming industry, and what the hell the Bechdel test has to do with boobs in games. Here's our conversation:

BUSTLE: Can you talk a little bit about what a game jam (a gathering of gamers with the goal of creating/planning/designing one or more games in a specific period of time) is and how you envision a game jam for The Boob Jam going? (I don't know much about game development)

JENN FRANK: Truthfully, I don't know that much about game development, either! I'm half-teasing, but I've always worked more in the editorial and press end of this industry. The way I've started explaining it to people is -- well, you've heard of the Bechdel test? So, if you think of the Bechdel test as a challenge — "can you ever have two characters interact in any way but this one way" — the Boob Jam is filching from the same idea pretty hard. "Can you create a game narrative or mechanic that discusses the existence of breasts in literally any way but this one way?"

And even though no one is explicitly barred or even dissuaded from participating, it does make the challenge a little tougher on, like, a totally heteronormative guy, I think.

Hopefully it will force people to really think outside the box of how games can show women's bodies. Maybe even what a game can be! What would be your ideal way to see breasts represented in a game? In my original post, I wrote that I envisioned, like, lactating warrior boobs that squirt milk onto enemies. But that's pretty ridiculous.

I want to be really hands-off with my part of the Boob Jam, outside of just promoting it. There are some really popular ideas people are floating, though!

One is an RPG where you have to go bra-shopping. Another idea I keep hearing is "breastfeeding stealth game," where you steal off to a secluded-but-still-public place and feed your child without being caught. More than one person has suggested this idea -- and it seems like they're not moms, but dads! Dads who are basing this idea on their wives' experiences! -- and so I think that's a very smart and funny way to try to, well, recontextualize boobs. I think the intent here is to recontextualize boobs but I keep avoiding the word "recontextualize" because I don't want to freak anybody out.

OK, you want to be the instigator rather than the ideas woman.

But yeah, "instigator" is a good way to put it. I would actually go with "facilitator" since I feel like the entire Internet really came up with this idea without me, though.

But you mean to make people to think about boobs as something other than sex characteristics meant to be sexy for men's eyes in a game, right?

That's literally the entire idea! And I'm not taking a stance, like, against boobs in games, at all. But they really are designed for men, usually by men, right, to communicate just this one idea of a boob. Sorry, I don't mean a literal idea of a boob, just the idea that boobs exist solely for one type of person — usually a not-boob-owner — to enjoy. What's interesting is, there's a pretty interesting backlash in the gaming industry and fandom over boobs right now.

There is? Can you say a little more about that? I read recently about some of the "fake geek girl" stuff but that's the only gender related controversy I know about.

I think this year the first whispers had mostly to do with this Tomb Raider reboot. So Lara Croft is younger, so the design decision to give her smaller breasts does make sense, but you almost get the feeling someone shrank her rack just to make her more believable as a "serious character."

So gamers are definitely already talking about the representation of breasts, though?

Yeah, but in these really superficial ways that don't dig too much deeper beyond cup size ... Because we're so hung up in this loop of "big boobs equals bad" and a lot of people who say that feel like they're being boob allies? When it's actually untrue and kind of hurtful. But this is the conversation this gaming culture suddenly can't seem to break free from. So honestly I'm kind of tired of the same ol', and I think other people are too! So this whole thing is very, okay, team, new idea: let's have another conversation simultaneous to this tired other one.

Right. Well, I was tweeting some social commentary and passing it off as a joke, AS I DO and that's how other suggestions for boob games kind of started pouring in.

I know you got the idea to try and get people to develop a game about boobs (or looking at/talking about boobs differently) after you got deodorant on your own boob and tweeted about it.

Well, OK, I am ready to set the record straight: I had deodorant all over my boob, but a subsequent tweet was the one about a "sexy video game character" who is weeping softly because she can't find a bra that fits.

And somehow that struck a chord with a lot of people! And I had made a wisecrack about "sexy game heroines" having to schedule mammograms — it's glib, but you know, wouldn't it be absolutely horrifying if a game in any way demonstrated the unsexy reality of having a pair of boobs — but then I started hearing from people who also had medical scares or, yeah, breast cancer. So gaming's ongoing conversation about "are these boobs okay? I don't know, crank them up or down a cup" starts to just ring empty when you consider the full ramifications of having a set of your own.

And for me, personally —when a survivor was thinking out loud about making a game that could demonstrate self-checks, since she found a foreign mass that her annual mammogram had missed and, you know, basically saved her own life — for me personally, that was when I got a lot less glib and a lot more serious. And I realize all this lady-talk might make some of the boys uncomfortable, but hey! That's what happens when you joke about, uh, your period, or life-threatening cancer, or whatever.

I mean, the only way people's ideas and views change is by changing the conversation, even if it makes people uncomfortable. People need to be made uncomfortable.

Right! And that's why I really want to play exactly the right chord here: I hope, if people are uncomfortable, they're uncomfortable enough to be fascinated, not so uncomfortable that they run away. That isn't to say I'm legislating what kinds of games are part of the jam in any way whatsoever, but it is why I've tried to make the whole thing, uh, kind of convivial and puerile. Because even though I hope people can make little playable parables about the grim realities of having boobs, I also think boobs are pretty funny. But again, I'm trying really hard to not frontload the jam with any of my weird feminist bias, and I'm trying to not use rhetoric like "intersectional boobs" or "bodily autonomy," even though the website does hint at maybe my own deeper interest in reproductive health.

Is there anything else you'd like Bustle readers to know about The Boob Jam?

Basically I want it to be as inclusive as possible, with only the barest hints of direction. I've scheduled the jam for the end of September. Usually a jam just occurs over a weekend, but I realize not everyone will want to do that. So the Boob Jam is kind of a "long jam." Anyone can contribute a playable game — it takes under an hour to completely learn Twine, for instance, which is a great way to quickly build a "choose your own adventure" game, in this case about boobs. I really hope that putting the deadline two months from now actually encourages people to be thoughtful, team up, or learn a little bit about game design in the meantime, if that's what they want to do! I hope it's encouraging, I mean, as opposed to "oh god what if everyone has forgotten about Boob Jam in two months." Everything remains to be seen, but I'm really excited!

More like this
Bustle Newsletter: May 6, 2022
By Stephanie Talmadge
Yomi Adegoke On The Offline Diaries & The Power Of Representation
By Jessica Morgan
Please Respect Mia Khalifa’s Rebrand
By Charlotte Shane
What’s The Kibbe Body Type Test That’s All Over TikTok?
By Marilyn La Jeunesse
Get Even More From Bustle — Sign Up For The Newsletter