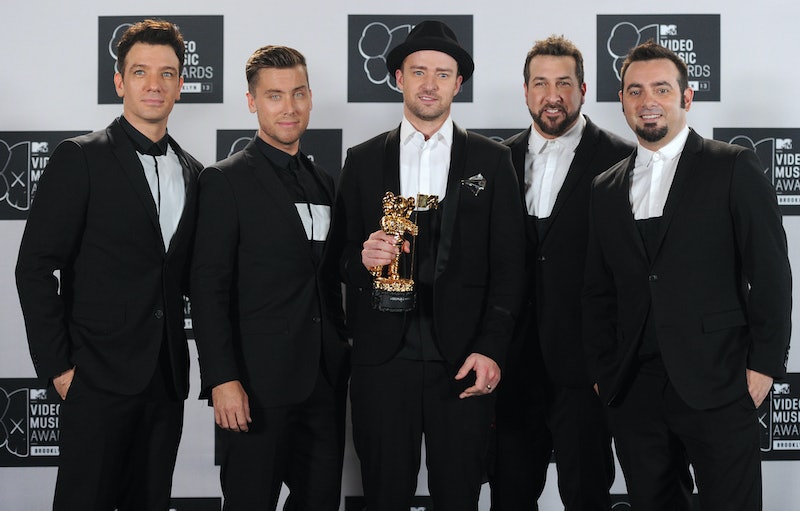 Remember last year’s rumors about an 'N SYNC reunion at the VMAs? Everybody was so excited, but then all we got was 30 seconds of the boys basically being Justin Timberlake’s marionettes — I mean, back-up singers. Meanwhile, the Backstreet Boys go on reunion tours what seems like all the time. Luckily, 'N SYNC fans may finally be getting the justice they deserve. Lance Bass hinted at an 'N SYNC reunion as part of his upcoming wedding!

Taking a page from the Kardashian family, Bass plans to film his wedding to fiancé Michael Turchin for an E! special early next year. Personally, I’m already dying to see it. But it gets even better! Bass isn’t filming his nuptials for the attention or money — he’s coming from the heart. He tells ABC News,

I want to show, especially Middle America, a true loving wedding that just happens to be focused on two guys, so really focused on the love story, instead of who is walking down the red carpet.

When asked about his 'N SYNC pals, he doesn't confirm or deny reunion rumors. Instead, he explains,

I don’t think anything will be planned, but the guys better be there, if not I’ll kick their ass. We are all musicians. There will be a stage, there will be a band, so I’m sure if you see that on stage, people are going to be popping up and doing whatever they want to do, there will be an open mic.

Is it too early to set my DVR? Just thinking about this is tearin' up my heart. To hold us over until then, let’s take a trip down memory lane. 'N SYNC may not be hitting up the recording studio together any time soon, but the band is active on Twitter with #ThrowbackThursday photos. Here are some of the best.

Since the wedding will likely have a more formal dress code, I guess these black and red outfits won't be making an appearance:

Forget the World Cup, I'd rather watch this crew play basketball again. I spy Wilmer Valderrama and Joel Madden:

I've visited that same wax museum, but any photos I took were not nearly as great as this one:

And finally, even though it seemed too short, the VMA performance was still glorious:

Oh well, guess we'll have to wait to watch the wedding ourselves! Yay for E! specials and the celebs willing to participate!