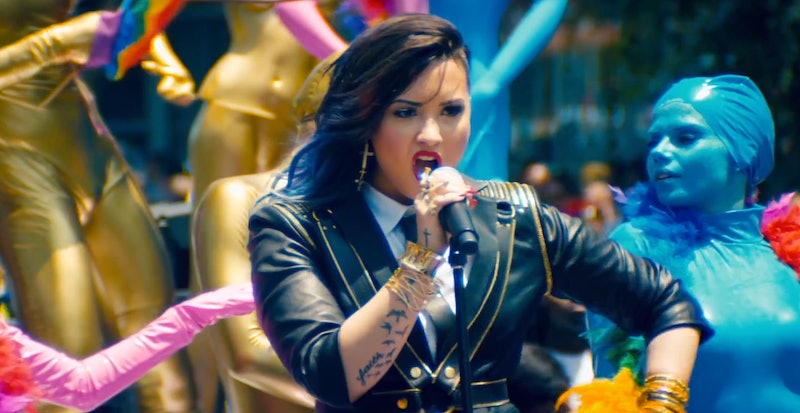 I'm gonna have to have a word with one miss Demi Lovato, because it seems like she's not telling us the truth in her don't-give-a-f*ck anthem "Really Don't Care." We think she does care, you guys. Lovato filmed her latest music video at LA's pride festivities and everything. Pride's all about caring! And also assless chaps.

Lovato was the Grand Marshall at this year's LA Pride Parade in West Hollywood, just a few weeks before performing as a headliner at NYC's Pride Dance this Sunday. She seized the opportunity of LA's June 8 celebrations and used the parade as the backdrop of much of her "Really Don't Care" video. The video features a sampling of the wide array of people who stand as near as possible to the cameras at parades — as well as some celebrity cameos.

Among the famous faces in the video are Lovato love interest and former Fez Wilmer Valderama, Cher Lloyd, Kat Graham, Travis Barker, and Perez Hilton. Despite the presence of Perez Hilton it all rocks. Right at this second my biggest regret is that I live like five blocks away from where these festivities took place and yet could not attend because I was writing about The Fault In Our Stars ' box office performance. The sacrifices I make for you people! I could have met this guy!

More like this
Tristan Thompson Plays Drake’s Best Man In A Music Video Wedding With 23 Brides
By Grace Wehniainen
Olivia Rodrigo’s Song Dedication To 5 SCOTUS Justices Sent A Strong Message
By Grace Wehniainen
Will Beyoncé Be At The BET Awards To Perform “Break My Soul” Or Attend The Show?
By Jake Viswanath
Everything To Know About J-Hope From BTS’ Solo Album ‘Jack In The Box’
By Stephanie Topacio Long
Get Even More From Bustle — Sign Up For The Newsletter