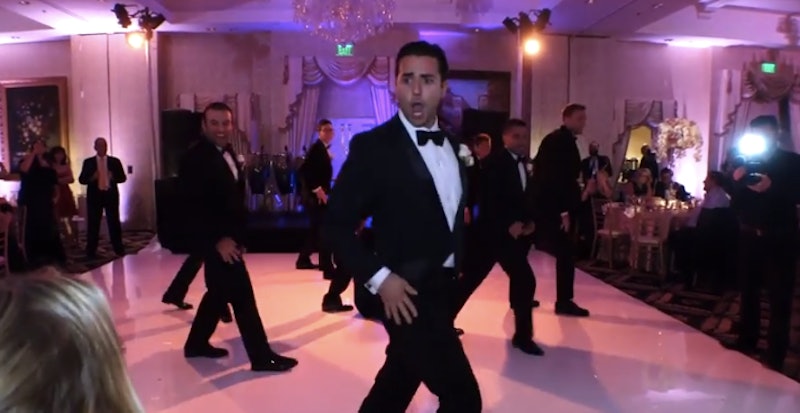 I may not totally understand Uber weddings or bridesmaid butt photos, but one wedding-related story I can get behind this week is dancing, lip syncing groomsmen. This video is currently making the rounds, and it’s kind of the perfect thing to be watching on a sunny summer Friday.

The wedding in question saw Sean and Ariana Rajaee saying their I dos to each other in Los Angeles on June 21 — and during the reception, the groom broke out a little surprise for his new wife with a little help from his groomsmen: A perfectly-choreographed dance routine full of awesomeness. Here’s how it went down:

First, they opened with Beyonce’s “Crazy in Love” before moving on to “Bootylicious” by Destiny’s Child. Next, they did their best Backstreet Boys impression with a lip sync to “I Want It That Way” and continued on to what the Huffington Post tells me is a Persian dance number (FYI we’re pretty sure the groom is Persian himself); and lastly, they finished up with a grand finale of Bruno Mars’ “Marry You” (of course). The groomsmen get major points for being totally game for it, especially since a number of them flew in from way the hell far away for the wedding and had to learn the routine at the last minute. The best part, though, has got to be the groom: A) He looks like he’s having a blast, and B) it’s so clearly for the love of his life. Put those two things together and combine them with his equally crazy in love (see what we did there) bride, and BAM. Recipe for adorable, right there.

Does anyone else kind of want these dudes to have a dance-off with the guys we spotted last week giving Beyonce a run for her money? I suspect the Beyonce guys would probably beat the groomsmen, mostly because they have the ability to do the whole thing in heels — but who knows. It would certainly be an epic battle of dance-ness, wouldn’t it?