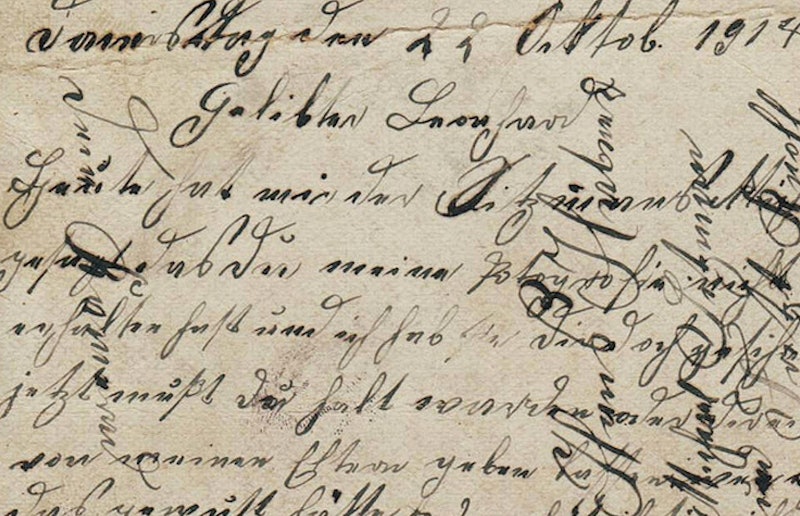 Texting is the most modern form of communication (we still haven't figured out mental telepathy yet, right?) and frilly, pen-and-inkwell script is among the oldest (not including, you know, hieroglyphics). With that in mind, 24-year-old graphic designer Cristina Vanko came up with a brilliant mashup of the two. Forbidding herself from using her smartphone’s keyboard for one week, she instead relied on her newfound hobby – calligraphy – to engage in conversation. Whether it was gothic scripture, elaborate cursive, or playful comic sans, Vanko got her hands dirty with a pen and paper. She photographed each handwritten message and sent it to her friends through a text message. No cheating — If she was lacking a piece of a paper, she became resourceful with the nearest napkin.

Wedding invitations, graphic design and religious art are the usual mediums that we deem worthy of calligraphy – so imagine if you received a text message crafted with the same level of creativity and precision. Reflecting on her experiment in The Atlantic , Vanko writes that she was able to conjure the same excitement associated with receiving a handwritten letter, a pleasure that is almost completely foreign to us these days.

Vanko also found that her carefully crafted messages made her conversations more intimate, and the personality associated with different styles of font allowed for more self-expression. Furthermore, the time-consuming nature of calligraphy forced her to use language efficiently, and Vanko found that she had freed herself from the responsibility of responding consistently. Vanko notes that the average 18-to-24-year-old sends and receives approximately 4,000 messages a month, or rather, 500 texts a week. The week of Vanko's experiment, she only sent 100.

After a seven day hiatus from regular texting, Vanko reintroduced herself to a typical keyboard. Her experiment reminds us that no touch-screen can rival the delights of a handwritten message.

More like this
Here's How To Get Your iPhone To Update Automatically Forever
By Emma Carey
20 Smart Devices Under $35 That’ll Change The Entire Vibe Of Your Home
By Emma Carey
Why TikTok Is Flooded With Controversial Videos About "Pick Me Girls"
By Courtney Young
30 Clever Ways To Slide Into Your Crush's DMs
By Griffin Wynne, Carolyn Steber and Lexi Inks
Get Even More From Bustle — Sign Up For The Newsletter