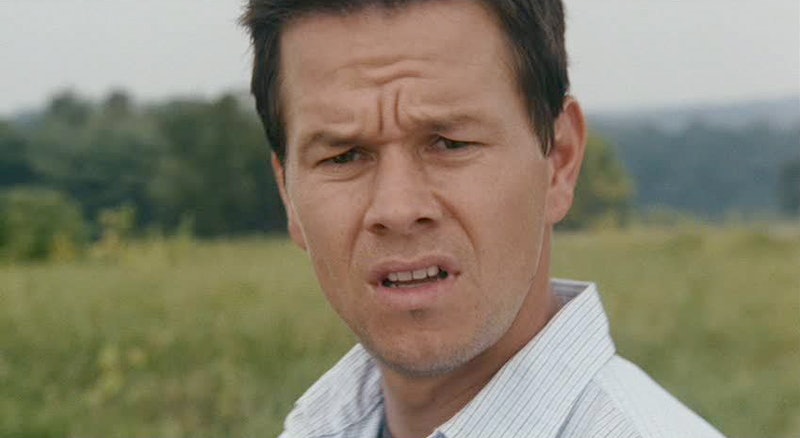 The furrowed brow is truly and art-form and no man has mastered it quite like Marky Mark. The latest Autobots versus Decepticons installment, Transformers: Age of Extinction premieres on June 27 and naturally, it includes a confused Mark Wahlberg. And to celebrate the fact that no great film starring the 43-year-old actor is complete without his furrowed brow, The Wrap released a 60-second supercut of Confused Mark Wahlberg that really proves that an actor's eyebrows are their greatest instrument.

Moments from Wahlberg classics like The Perfect Storm, Ted, The Fighter, and an extended clip from The Happening all make the cut in the 60-second video. And each perfectly crafted, confused moment is better than the next — which almost redeems him for hating on SNL 's "Mark Wahlberg Talks to Animals" sketch. (Almost.) But while, Wahlberg is possibly the OG of the expressive, confused, furrowed brow, he's not the only star is Hollywood who knows its power and strength.

So, how does he hold up against the likes of Tyrion Lannister, an actor who might actually be sadder than Keanu Reeves, and a 165-year-old vampire?

But! Is his eyebrow-raise better than...

I demand a Trial by Combat on this one. By default, Peter Dinklage wins — have you seen GoT Season 4?

I mean, he's been doing it for 165 years, but in real life, Wahlberg's got a few years on him — Wahlberg takes this one.

Russell Crowe as the Title Character in Noah

She's totally seen Wahlberg's The Happening moment. So, because Tay Tay obviously copied, Wahlberg takes this one, too.

Leonardo DiCaprio as Richard in The Beach

Someone did his face exercises that day but, even though I've got a soft spot for Leo, Wahlberg wins for seniority.

Turn to page 394 to see that you lost this one, Wahlberg.

#Challengeaccepted, Wahlberg, but because you have a few more expressive forehead wrinkles, you win.

Wahlberg is the reigning King of Planet Furrowed Brow.