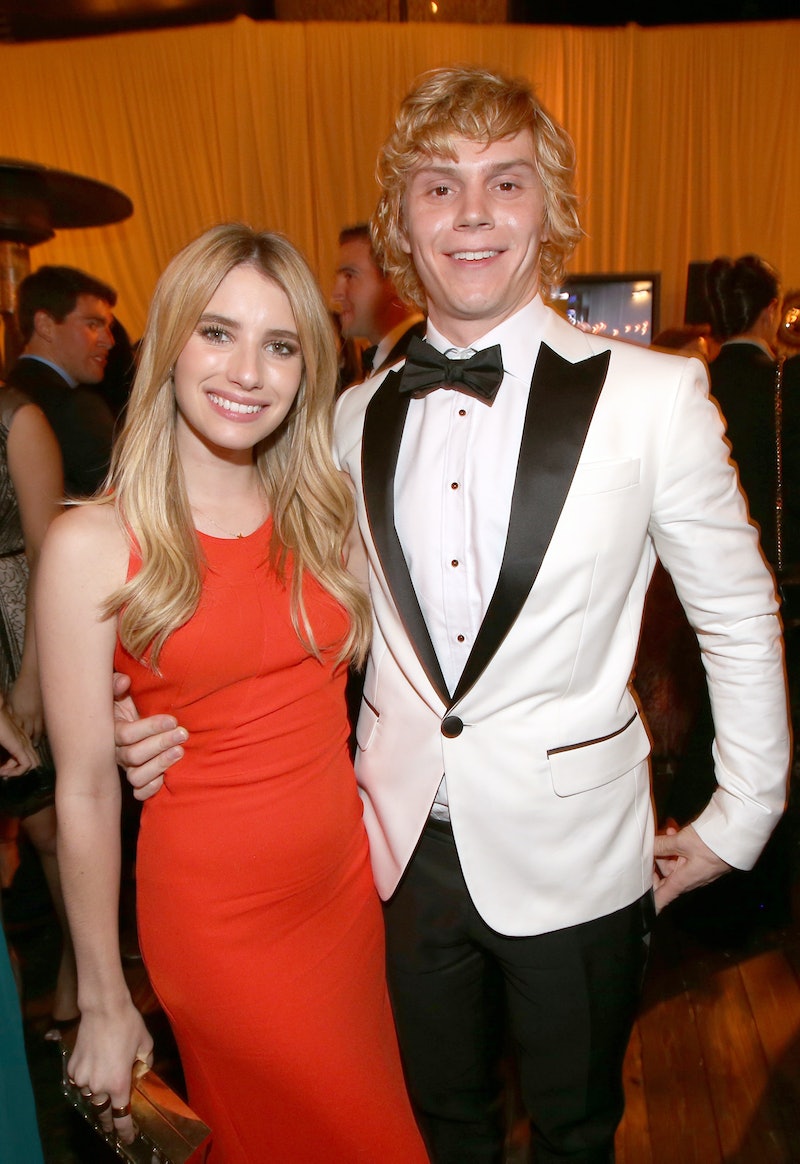 If you weren't already aware, American Horror Story love birds Emma Roberts and Evan Peters are not simply dating any longer, they have betrothed themselves to each other. Which is weird if you think about their Coven story line in which they both died... but I digress. When word broke of the real life, alive couple's engagement, the news wasn't exactly shocking considering the two are basically inseparable even when they aren't working together. Looks like not even death on your FX show can break the bond of true love. But even with the exciting news, there was still one question left unanswered: How did Emma Roberts and Evan Peters start dating? Did they meet for the first time on the show? Was it love at first sight? Did they secretly hate each other at first?

Roberts recanted the story of meeting Peters while appearing on Chelsea Lately, and it may not be as typical a romance as you might think. Initially, Peters wasn't interested in the actress even slightly. In fact, he thought she was a crazy person. Roberts is referring to the couple's first encounter on the set of their movie, Adult World. She remembers fondly, "He literally didn't speak to me the entire movie. He thought I was so weird." Why did he think the usually poised and composed Roberts was so odd? "I had no makeup, it looks like I cut my own hair off, so I was not exactly looking cute," she explained of her look for the film. But after Roberts was cast in the third season of AHS, love began to fill the air. Peters began with texting his now-fiancé (how romantic!), they ended up hitting it off, and the rest is history.

But before everything was patched up between the two we can only imagine their awkward encounter after filming Adult World.

ROBERTS DEFINITELY STROLLED INTO THE AHS TABLE READ ALL LIKE

AND, INITIALLY BEING PUT OFF BY HER, PETERS MAY HAVE REACTED SOMETHING LIKE THIS

BUT EVENTUALLY, HE REALIZED HIS MISTAKE

...BECAUSE AFTER ALL, ROBERTS IS PRETTY COOL

AND SO THEY RECONCILED AND ENDED UP LIKE, WELL, THIS

Good luck, you crazy kids! Also, an American Horror Story themed wedding isn't out of the question, is it?

More like this
Another Side Of Rupert Grint
By Maria Sherman
At 28, Rosie Perez Risked Her Career To Stop Playing Stereotypes
By Gabrielle Bondi
Here’s Everything Coming To & Leaving Netflix In February
By Jake Viswanath
Pamela Anderson’s Dating & Marriage History Could Be Its Own TV Series
By Jake Viswanath
Get Even More From Bustle — Sign Up For The Newsletter
From hair trends to relationship advice, our daily newsletter has everything you need to sound like a person who’s on TikTok, even if you aren’t.