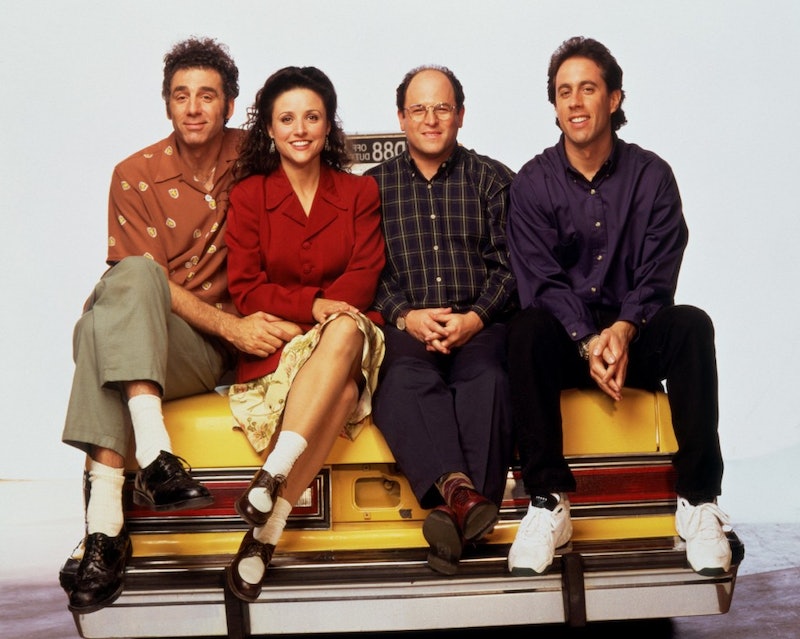 There is no Seinfeld without New York, and there is no New York without Seinfeld. Living in the city now, I find myself constantly appreciating how accurately Seinfeld portrayed the gritty, unglamorous lives of regular people pursuing regular things: sex, success, good coffee, and some laughs. Unlike Friends — or its modern iteration, How I Met Your Mother — Seinfeld’s portrayal of the quotidian New York experience is pure nihilistic perfection: the characters’ lives are uncomfortable and messy (and, of course, hilarious.) Their struggles — from dealing with abrasive soup vendors to unsatisfactory shower pressure — typically lacked definitive resolution. As co-creator Larry David put it, Seinfeld’s genius lies in each episode’s strict adherence to a “no hugging, no learning” rule.

As a Seinfeld devotee who moved to New York two years ago, it immediately became clear to me that Seinfeld got NYC living so, so right. So, in honor of Seinfeld's 25th anniversary, here are 31 things the show nailed about New York life.

1. 95 PERCENT OF THE POPULATION IS UNDATEABLE...

The dating scene in NYC is terrible...in part because you develop weird standards. Potential mates — who seem attractive and intelligent enough — become undateable for a wide range of reasons: they won't "spare a square" of toilet paper in a time of need, they eat their peas one at a time, their hands are unusually large, they have a weird laugh, their breasts seem fake, etc, etc.

And the dates you do go on are either boring or absurd. Like that time Elaine was about to kiss her date goodbye and he "took it out."

2. SO MARRIAGE IS PRETTY MUCH OUT OF THE QUESTION

"What are you thinking about — Marriage? Family? They're man-made prisons! You're doing time! And you can forget about watching TV while you're eating...it's sad, Jerry. It's a sad state of affairs."

3. YOU DISTRUST MOST PEOPLE

Because we live in a world where every guy on OKCupid says he's 6'0", realtors say that 200-square-foot apartments are "cozy," and "non-fat yogurt" is not always non-fat (I'm looking at you, 16 Handles).

4. GOOD SHOWER PRESSURE IS EVERYTHING

People will go through the arduous NYC apartment search over and over again for this reason alone.

5. "INDEPENDENT YOU" AND "RELATIONSHIP YOU" ARE IN CONSTANT CONFLICT

"If Relationship George walks through this door, he will kill Independent George!! "A George divided against itself cannot stand!" This is what happens in a city where, even if most people are undateable, the options still seem endless.

7. YOUR HATE FOR CERTAIN PEOPLE GROWS STRONGER AND MORE UNREASONABLE EVERY DAY

Probably because you are forced to live in such close proximity with so many other human beings.

And, of course, everyone has a Newman.

You thought you were going to be a successful prime time broadcast journalist? That's cute.

Sometimes you have to collapse on a woman in the steam room to determine the authenticity of her breasts. I imagine this is more of a problem in Los Angeles, though.

10. YOUR WALLET IS OUT OF CONTROL

All those metro cards and bodega receipts! Same goes for handbags, briefcases, and your life in general.

11. YOU BECOME A RESOURCEFUL GENIUS

You're not above wandering into a random building to use the bathroom, at which point you accidentally end up working there for two weeks. And if someone throws out an eclair and its still on a doily, it would be ridiculous not to eat it. It's a concrete jungle out there!

A pastry is a terrible thing to waste.

12. BECAUSE YOU'RE GOING TO BE POOR FOR A VERY LONG TIME

Just accept it. Houses and backyards and nice cars and disposable income and washer/dryers are not in your future if you stay in the city.

13. THE LAUNDROMAT IS THE ABSOLUTE WORST

14. THE SUBWAY CAN BE A HOSTILE PLACE

Especially if you're playing board games.

15. BUT THE BUS, MAN. THE BUS. LITERALLY ANYTHING CAN HAPPEN ON THE BUS.

Kramer's absurd bus story — in which he's transporting a severed toe in a Cracker Jack box, starts a fight, takes over driving the bus and kicks a mugger out the door — actually sounds plausible.

16. MINIMIZING THE AMOUNT OF PEOPLE YOU TALK TO ON A DAY TO DAY BASIS BECOMES KEY TO SURVIVAL

Again, another symptom of living in such close proximity to so many damn PEOPLE. Thus, when attending social events, it's ideal if someone can guarantee to you that you won't have to talk.

17. YOU'LL DO ANYTHING TO AVOID SPEAKING ON THE PHONE

Why do you think Seamless is such a success?

18. YOUR BEST SKILL IS AVOIDING PEOPLE

19. PEOPLE ROUTINELY TAKE ADVANTAGE OF YOUR GOOD WILL

You give a guy an inch, he turns your apartment into a sausage factory.

20. GIVING SOMEONE YOUR SPARE KEY IS A VERY, VERY BIG DEAL

WARNING: The recipient of your keys can and will enter your apartment at any moment: to take a bath, make popcorn, and/or hook up with someone.

21. MISERY IS A RECURRING CHARACTER IN YOUR LIFE

No need to mess around with bowls.

23. YOU'RE ALWAYS CONVINCED YOU'RE GAINING WEIGHT

This is probably due to a combination of being surrounded by so much good food and so many freaking models.

25. DOORMAN INTERACTIONS CAN BE EXCEEDINGLY UNCOMFORTABLE

26. JUNK MAIL IS RELENTLESS AND EVIL

"Pottery Barn is in for a world of hurt!!" As are the restaurant menu distributors and candidates for your local borough president.

27. ...AS ARE ARBITRARY DELIVERY ZONES

OWNER: That's southside. Sorry, we don't deliver below 86th. ELAINE: I'm not below. OWNER: Yes you are. Street itself is boundary. ELAINE: Your guy can't cross to my side? OWNER: If we deliver to you, then what? 85th Street, Wall Street, Mexico, 84th Street.

28. YOU WILL SLEEP LITERALLY WHEREVER, INCLUDING AT WORK

"I love a good nap. Sometimes it's the only thing getting me out of the bed in the morning."

This is probably due to the fact that the sound of the BQE/neighbors having sex/Wednesday night EDM party at the downstairs bar kept you up all night.

29. PARKING IS TO BE AVOIDED AT ALL COSTS

Hell is owning a car in the city.

30. IT'S IMPORTANT TO CELEBRATE THE VICTORIES, HOWEVER FEW

31. BECAUSE GOOD FRIENDS ARE THE ONLY WAY YOU'LL SURVIVE THIS TOWN

More like this
Twitter Is Flummoxed By Lindsay Lohan’s “Pilk & Cookies” Pepsi Christmas Ad
By Shahed Ezaydi
Lily Collins Has Pretty Strong Opinions About Being A ‘Nepo Baby’
By Darshita Goyal
What Is Harry & Meghan's Net Worth? They're Richer Thanks To Their Netflix Doc
By Hugh McIntyre
Michelle Obama Opened Up About The "Discord And Discomfort" Of Marriage
By Stephanie Topacio Long
Get Even More From Bustle — Sign Up For The Newsletter