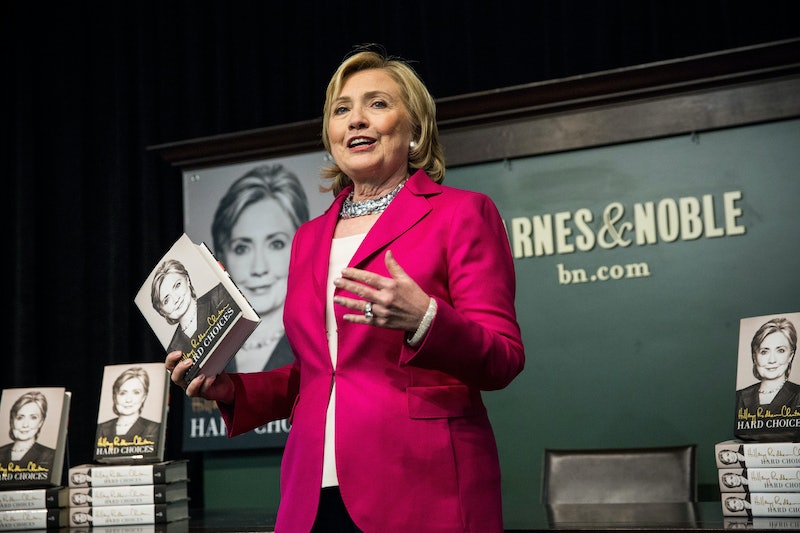 Hillary Clinton's hard choices are supposed to be behind her now that she's promoting her new autobiography in an extensive cross-country tour. Instead, the former Secretary of State continues to get pummeled for her recent interview gaffes, including her defense of her six-figure speaking fees. Now, it seems Clinton has garnered some more critics: Angered over Clinton's $225 thousand speaking fee, University of Nevada, Las Vegas students are protesting her upcoming appearance at the university. UNLV students claim that if Clinton receives six figures for her speech, then she could at least donate the paycheck.

"You could give scholarships to thousands of students, benefit research on campus, give more students grants for research and studying,” Daniel Waqar, Student Relations Director for the UNLV Student Government told Ralston Reports. Waqar added that tuition is expected to increase by 17 percent at the school, so students could really use the extra financial support.

"We would hope that Hillary Clinton commits to higher education ... and returns part or whole of the amount she receives for speaking," added Elias Benjelloun, the UNLV Student Body President.

Clinton is slated to appear at the UNLV Foundation Annual Dinner in October, a philanthropic event that began in 1989, according to the university. Clinton will be serving as the keynote speaker for the 2014 dinner, hosted at the Bellagio Resort on the Las Vegas Strip. The event already comes with a pretty hefty price tag: individual tickets cost $200 each, while tables cost between $3,000 and $20,000.

Nevada-based political journalist Jon Ralston, of Ralston Reports, has been at the center of the debate. Over the last few days, Ralston has tweeted non-stop about Clinton's $225 thousand speaking fee, criticizing the six-figure price.

UNLV students began firing back at Clinton during the week, calling for her to speak for free and even creating political memes.

But not everyone is in agreement with Ralston and the UNLV student body. Nevada Sen. Harry Reid defended Clinton's high speaking fee, saying her appearance at the foundation's event will greatly benefit a worthwhile cause. “Anything we can do to focus attention on UNLV, that’s extremely important to do, and this certainly will focus attention on UNLV, and that’s why they have these people come,” Reid told The Las Vegas Review-Journal.

It's also been disputed that Clinton is just going to pocket this huge $225 thousand paycheck for herself. According to The Washington Post, Clinton's office said her fee from the UNLV event will be donated to the Bill, Hillary and Chelsea Clinton Foundation, which develops global initiatives ranging from climate change to women's rights.

So, is this just another instance of college kids being college kids, or does Hillary Clinton have another hard choice to make?