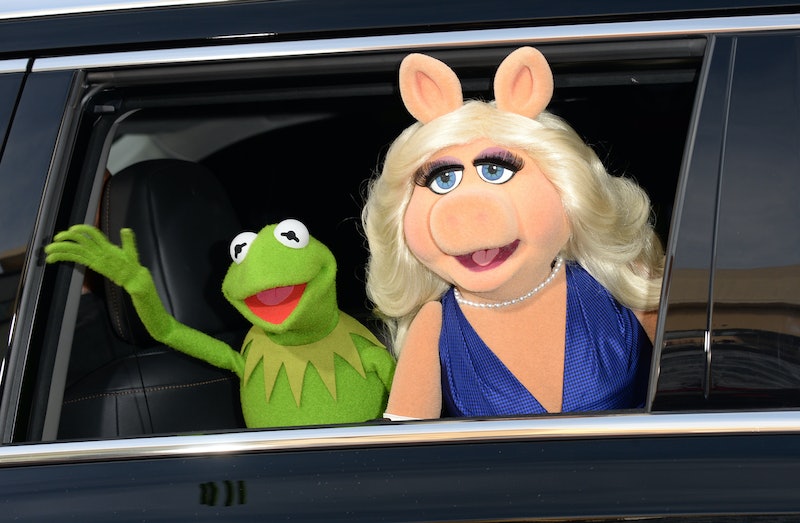 For their most recent movie, the delightful Muppets Most Wanted, The Muppets embarked on a globe-trotting adventure across several European cities. To celebrate the Fourth of July, though, they've returned home and are giving the most All-American performance possible: They're appearing at the Capitol as part of PBS's 4th of July TV special A Capitol Fourth .

They'll be in storied company, too. This year's lineup of performers include Frankie Valli, Patti Labelle, John Williams, Sara Evans, Kelli O'Hara, Jordin Sparks, and Phillip Phillips. According to USA Today, when The Muppets take the stage, they'll perform their classic "Rainbow Connection" (awww), accompanied by the National Symphony Orchestra.

This isn't the first time that Jim Henson's creations have appeared on A Capitol Fourth. Way back in 2006, Elmo was one of the stars of the show. He got to sing a few songs, including "How Do You Do?" with Vanessa Williams, and "Happy Birthday to You" to the country. Later, in 2009, a bunch of the Sesame Street gang — including Big Bird, Oscar the Grouch, Cookie Monster, Rosita, Abby Cadabby, and, yes, Elmo again — returned to celebrate Sesame Street 's 40th anniversary. They sang Sesame Street favorites, like "C Is for Cookie," "I Love Trash," and, of course, "Sunny Days," the Sesame Street theme song. Thankfully, none of their A Capitol Fourth performances bore any resemblance to this, which is almost experimental in its weirdness.

Of course, The Muppets aren't just about the Fourth of July. You can bring them out for any holiday, and, chances are, whey they do will be amazing. Here are just a few examples of holidays that have been improved by Muppets.

Here, the "Leprechaun Brothers" — AKA Animal, Beaker, and the Swedish Chef — perform a soulful (and sob-filled) rendition of "Danny Boy." There's just something about those cable-knit sweaters that just kills me. And Beaker can really hit those high notes.

Watch as Dr. Bunsen Honeydew and Beaker debut the Carve-o-Matic 3000, a machine that helps carve pumpkins for Halloween. Poor Beaker. He just can't catch a break, can he? Then again, he looks kind of awesome as a scary jack o'lantern.

Christmas is the holiday where Henson creations really shine. In addition to their full-length, theatrically released, musical adaptation of A Christmas Carol, they've had numerous holiday specials: Emmet Otter's Jug-Band Christmas, A Very Merry Muppet Christmas, A Muppet Family Christmas, A Muppets Christmas: Letters to Santa, and that weird Lady Gaga special last year that seemed more about Gaga's album than any particular holiday. (The "Leprechaun Brothers" also returned in a web video for an amazing rendition of "Ringing of the Bells.") But the Christmas appearance nobody could've seen coming would be their guest vocals on CeeLo Green's "All I Need Is Love," from his holiday album CeeLo's Magic Moment. Not only do they get to sing, but their famous "Mahna Mahna" is incorporated into the track — and it still sounds festive.