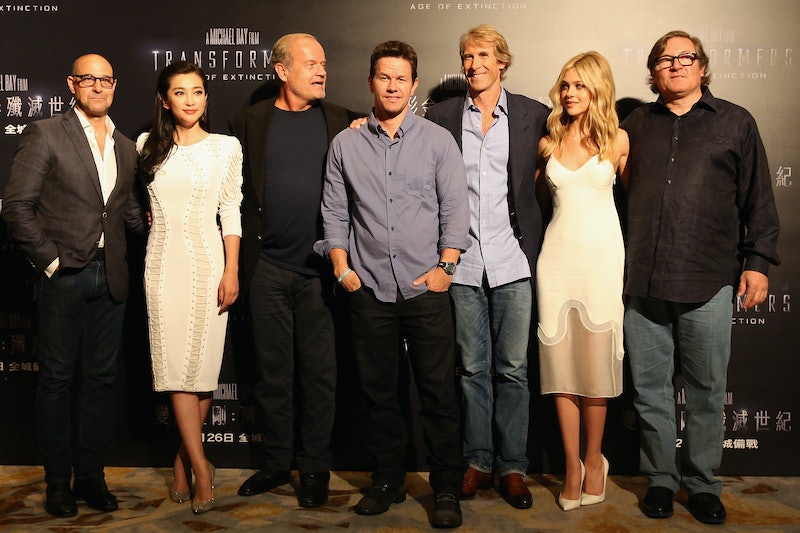 Not that I had many high hopes or grand expectations for the fourth installment of the Transformers' franchise, Transformers: Age of Extinction , but if it's possible I was let down even more than I thought was feasible for a film featuring mainly CG characters. Except sadly, it wasn't the CG characters that disappointed me. I saw the first Transformers back in 2007 as a 16 year old, and I don't honestly remember much other than that I thought it was cool and generally entertaining, I had extra buttery popcorn which was awesome, and I squealed when Louis Stevens appeared on the big screen in front of me. Clearly, since 2007, some of my opinions have changed.

Not that this Transformers wasn't entertaining, it was to an extent. Explosions, Marky-Mark dangling mid air, endless car chases, and a main character getting cooked and solidified were certainly tailored to those who feed on action. It was enough to be the gratuitous summer hit movie, and judging by the box office numbers, it certainly delivered to that notion. What it didn't deliver on though, was giving the female characters any kind of significance or voice. The same old tired female tropes and marginalization were rampant throughout the two and a half hour film and it left a horrible taste in my mouth.

Case in point, three of the (maybe four?) females that had a speaking role in this film fell into stomach-turning caricatures of what women "appear" to be to level-headed and strong men.

THE DAMSEL IN DISTRESS

First, there was the problem of Mark Wahlberg's character, Cade, and his daughter, Tess. Played by 19 year old, Nicola Peltz, Tess was a completely overly sexualized 17 year old that was apparently "old" enough to get a nice minute of air time just for the camera to pan up her tan legs to her incredibly short shorts, but not old enough to merely have a boyfriend. As if her first appearance on screen in her friend's topless jeep full of mid drift-bearing girls who like to cheer things like, "Let's get wasted!" wasn't an immediate indicator that there wasn't much hope for the role, Most of Peltz's air time was sadly just a progression of that. The only thing that Michael Bay was dedicated to in regards to this character was showing off her body or the full face of makeup and heels she was still sporting regardless of the whole alien-robot apocalypse thing. Her lines were limited to screaming or crying things like, "DADDY!" or "HELP!" and it was, of course, left to the men to save her and to protect her because they somehow had more of a chance against the alien invaders than she did? Err, right. But basically, they just needed to save her from her emotional and hormonal self. Obviously, girls can't make decisions! They like, get their periods and stuff!

The brief appearance of the real estate agent was also a nice little treat to show just how much of a nuisance women were in this movie, not only to the main character, but to society as a whole. Because obviously, it was her fault that Cade's house went into foreclosure, not the fact that he hadn't paid his mortgage or any bills...

No, she was undoubtedly the villain! We were supposed to cheer for him as he ran after her car with a bat for showing two potential buyers the house that the bank now owned. It wasn't that he neglected work and his daughter to fixate on his inventions, it was that the mean old lady was ruining his mojo! He's an inventor! He's zany! Just go with it!

Because after all, she was boisterous and loud and and spoke out of turn and thus, he had every right to attack because she annoyed him. How dare she.

She's emotionally distant, impossibly fit, and doesn't talk too much-- what a KEEPER! Seriously though, despite the character, Su Yueming, portrayed by Bingbing Li, supposedly being a world class business woman and martial arts extraordinaire, she served only as a catalyst to Stanley Tucci's Steve Jobs-like smug yet endearing character. We are supposed to love that she shrugs off all of Tucci's advances despite that fact that she never showed one iota of interest in him before hand. Rather than consider her a worthy teammate, he's far more interested in her as a conquest because she poses a challenge for him. Because clearly, the whole extinction of the human race isn't already enough of a challenge.