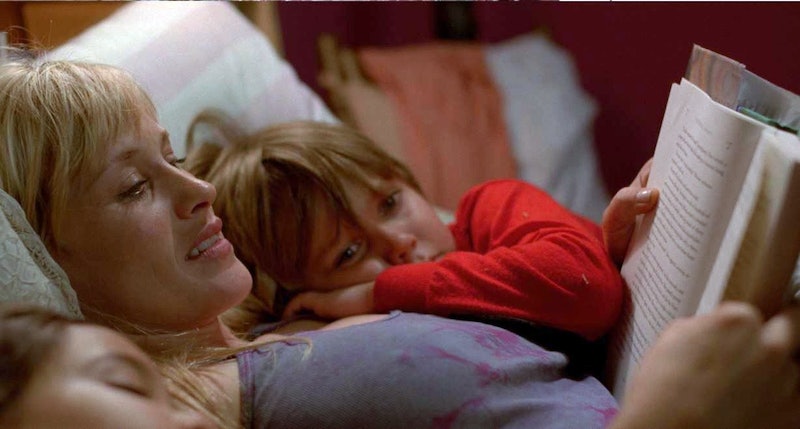 The average American film takes about three months to film. While the days and hours may be long, the timeline of shooting is rarely more than a couple of months. So when Patricia Arquette was approached by Boyhood director Richard Linklater about starring in a film that would take a dozen years to complete, we wouldn't be surprised if she ran for the hills.

"I had no hesitations," the actress told Bustle. "I knew it was a brilliant idea and I was excited to engage on camera like that, watch the kids grow up and form long term relationships with the other actors."

Ambitious is an understated term to describe the film, which follows the life of 5 year old Mason (Ellar Coltrane) as he transitions into adulthood before our very eyes. A decade of filming for a few weeks every year allowed the film to keep the same actors as their characters evolved in an incredibly real way. Popular songs of the year and discussions of the box office hits of the year grounded the story in real time. There's even a scene where the children attend a Harry Potter book release party.

The rigidity of a typical script was tossed out the window for improvisational acting and actor collaboration. "The scene where we talk about the little boy sharpening the rock came from a friend of mine's experience," she said. "We'd incorporate so many different things from so many different people, so there had to be some flexibility. You needed to understand why your character was doing what she was."

While the film encompasses many life moments of a boy transitioning to adulthood, the basic story follows single mother Olivia, struggling to raise her children Mason and Samantha among her own career and relationship troubles. Ethan Hawke plays sometimes-there father Mason Sr.

"One of the things I found really interesting was the relationship between Mason Sr. and Olivia," Arquette said. "He was philosophical and free-spirited. They got married really young then he went off to Alaska and was playing guitar and fish and she had the sole responsibility of raising these kids financially and literally."

Arquette's character, understandably, holds a lot of resentment towards the father who fled. But when the actress watched the movie back, she saw the narration in new light.

"When I got to see all of Ethan's scenes with the kids, he was such a beautiful father. Olivia didn't get the support that would have been helpful to her, but he did give the kids some incredible gifts," she said. "For years we have these blind spots, and we can resent people we had some of the most significant relationships in our lives with, and we don't really see the beautiful qualities they have."

Arquette is a mother herself, having had her first child at the age of 20. She also went through a similar trajectory to Olivia's over the course of 12 years: Marriage, kids, divorce.

"There's something about a second divorce, in some ways it's harder, it's like a secondary failure. It's the last thing you want to do to your kids again. People have families and they're flawed and they're complicated. People are struggling to grow up whether they're the children or the adults."

And this lesson, among others, is what makes the film so effortlessly beautiful. It is a picture devoid of formulas, good guys and bad guys, and predictable story arches. It aims to capture life, which does not mimic Hollywood blockbusters. Boyhood is realistic and its drama is palpable. The characters are relatable and familiar. You may not have grown up with a single parent or been forced to move homes repeatedly as a child, but you knew someone who did.

Another thing the film tackles with authority is its views of motherhood. While called Boyhood, and boasting typical coming-of-age tropes like looking at Victoria's Secret catalogs and dabbling in drugs for the first time, the story is very much about its mother.

"Motherhood is not a very celebrated position or a particularly glamorous one," Arquette said, speaking from experience. "I don't think think there is a perfect mother. If someone thinks they are one, they're really self-deceptive. I wanted to show that it's a lot of work, it's beautiful but it's hard. We are all doing the damn best we can."

More like this
12 Years Ago, Austin Butler Manifested His Oscar Nom In This Disney Movie Scene
By Jake Viswanath
Here’s Everything Coming To & Leaving Netflix In February
By Jake Viswanath
Another Side Of Rupert Grint
By Maria Sherman
Jennifer Coolidge Hunted For Jewels & Lashes In J.Lo’s Hotel Room
By Jake Viswanath
Get Even More From Bustle — Sign Up For The Newsletter
From hair trends to relationship advice, our daily newsletter has everything you need to sound like a person who’s on TikTok, even if you aren’t.