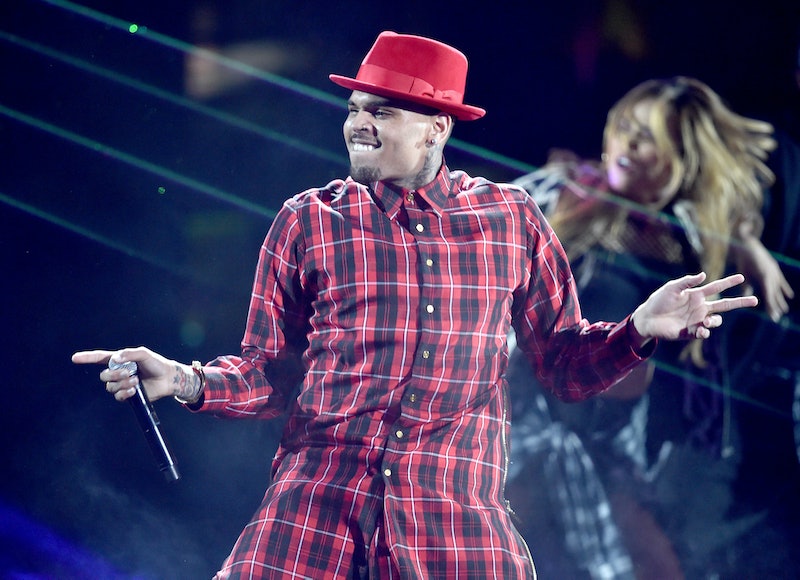 After only four weeks of freedom, Chris Brown is back to doing what he does best: making music, not war. Brown was released from jail in early June to the delighted cheers of fans who immediately began begging for him to hit the recording studio and get back to work on his next album. Although Brown was seen in the studio with Justin Bieber, which is an ironic but understandable match-up of People We Love to Hate, his first single since his release from jail thankfully doesn't feature Bieber at all. The single is called "New Flame" and Chris Brown teams up with Usher and Rick Ross to release a pop song you're going to get stuck in your head whether you want to or not.

"New Flame" is a sultry ballad overlaying a catchy, repetitive beat. The lyrics tell the story of Brown trying to entice a beautiful woman into taking a risk on him and see where things could go between them when he meets her at a club. So, pretty much, it sounds exactly like something you would expect you would expect Chris Brown and/or Usher to put out. There's really nothing new here and maybe that's the point. Maybe this is Brown's way of showing his fans that prison hasn't changed him at all.

"New Flame" acts as the fifth single from X, which is all well and good, but considering the album was supposed to be released in May prior to Brown's recent legal trouble then "New Flame" really just feels like another delay on the album. I doubt that Brown really needs to generate further interest in X. Those who were already going to buy it have been clamoring for it since the news broke that he had set foot outside of prison and those who aren't going to buy it aren't going to change their mind after hearing "New Flame".

If nothing else, Team Breezy will be pleased with the new music and if they've supported Brown thus far then they'll support him in this throwback to old school Brown. For the rest of us, however, there's nothing groundbreaking here, nothing interesting enough to make us forget for the length of the song that Brown just got out of prison for assaulting someone while on probation for assaulting someone else. It's a pretty forgettable single, to be honest, noteworthy only because it's Brown's first since being freed.