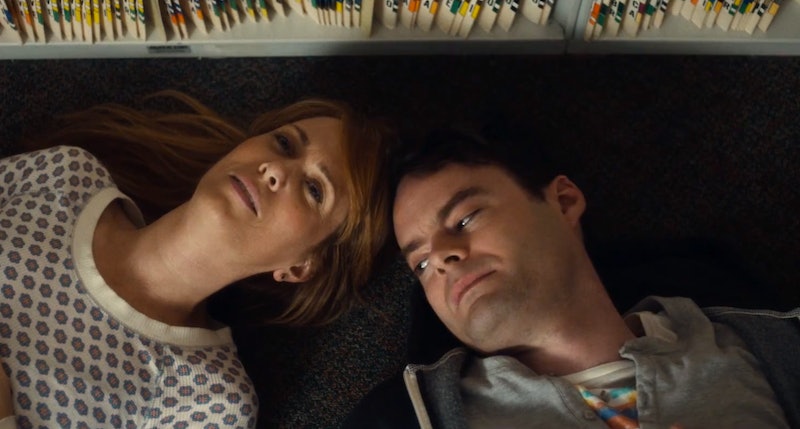 The buzz surrounding Bill Hader's performance in The Skeleton Twins started gaining momentum months ago at Sundance and now that we actually have a Skeleton Twins trailer, it's making us believe the hype. Kristen Wiig and Bill Hader playing twins was enough to get us to the movie theater, but this trailer's enough to make this one of our most anticipated films. Like Maya Rudolph in Away We Go and Will Ferrell in Stranger Than Fiction, Saturday Night Livers have a way of proving to us that they can knock the heartfelt character dramedies out of the park.

The Skeleton Twins — which won the award at Sundance for dramatic screenwriting — tells the story of fraternal twins (Hader and Wiig) reuniting after a decade of estrangement. And yes, though their may be some pensive bits, the SNL alums still show a devotion to comedy in the film. As The Star's Peter Howell wrote in his Sundance coverage:

It’s very funny, especially in the most-talked-about scene since the film had its world premiere Saturday to audience and critical raves. It’s the one where an angry Maggie struggles to keep from smiling and joining in when Milo starts lip-synching and dancing to “Nothing’s Gonna Stop Us Now,” a cheeseball 1987 life-affirming pop hit by Starship.

That scene's in the trailer, and it certainly had us won over. In fact, the entire thing did. It's kind of making us wish summer would just hurry up and end so we can get to the September 19 release date already and spend some quality time with Wiig and Hader.