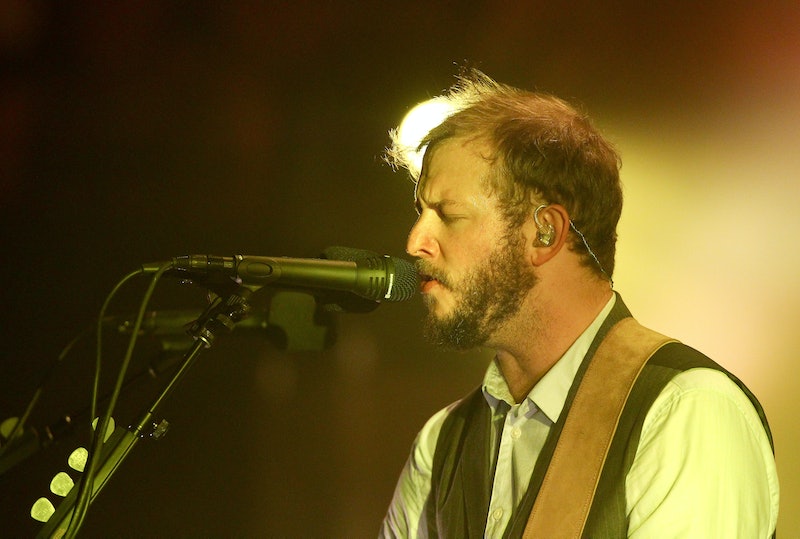 Thanks to Zach Braff's latest project, the Bon is back in town. And though you can't listen to the Wish I Was Here soundtrack until July 15, you can listen to Bon Iver’s "Heavenly Father" right this very second. "What sorcery is this?" you ask. It's not sorcery. It's the Internet. You have to scoot on over to NPR's website to hear it, but trust me: It's worth the scoot.

The electro-choir sound that serves as the spine of the song startled me at first (partially my fault: I had the volume cranked much too high), but once my heart rate settled down, I was IN. I was in like crazy. "Heavenly Father", like every Bon Iver song that's preceded it, wrenches all of my guts. Ugh, Justin Vernon's voice devastates me. Such beautiful magic.

Boy howdy, I've missed Bon Iver. It's been too long! "How long?" you ask. Bon Iver, Bon Iver, the band's Grammy Award-winning second—and most recent—album, was released in 2011. (Three years ago? That's an ETERNITY!) In 2012, Vernon appeared on Minnesota Public Radio's The Current and said Bon Iver would be “winding it down" for a while. (Bon Iver took a breather, but Vernon did not: Dude took on approximately one million projects, including but not limited to a new Volcano Choir album and contributing to Kanye West's Yeezus.)

The years have gone by, but I did not lose hope. I believed we'd hear more Bon Iver sooner rather than later. I remained patient. And it paid off. What a terrific Monday.

More like this
J. Lo Just Announced A New Album — And Ben Affleck Inspired At Least 1 Song
By Stephanie Topacio Long
The 'Love, Lizzo' Harry Styles Scene Is Just 1 Moment That Made Fans Feel Seen
By Brad Witter
The Meaningful Easter Egg In The 'Black Panther: Wakanda Forever' Soundtrack
By Grace Wehniainen
Olivia Wilde & Harry Styles Are Reportedly "Taking A Break" After Almost 2 Years
By Jake Viswanath and Radhika Menon
Get Even More From Bustle — Sign Up For The Newsletter