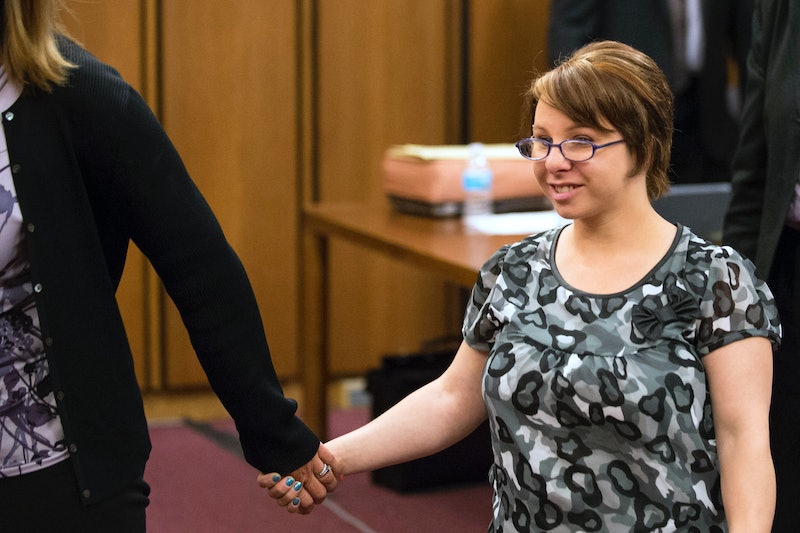 During Ariel Castro's sentencing on Thursday, one of his victims spoke out on what her life was like for 11 years while she was held captive.

Michelle Knight, the only one of three women abducted by Castro to appear in court and give a statement, addressed Castro for the first time since she was rescued in May.

"I spent 11 years in hell, and now your hell is just beginning. I will overcome all this that happened, but you will face hell for eternity. From this moment on, I will not let you define me or affect who I am," Knight said.

Knight, now 32, was the first woman to be abducted by Castro in 2002. Castro offered Knight a ride after finding asking for directions to a social worker's office. According to the New York Daily News, he then lured Knight into his home by telling her she could get a puppy for her then two year old son, and held her captive since.

"I missed my son every day. I wonder if I was ever going to see him again. He was only 2½ years old when I was taken. I look inside my heart and I see my son," Knight said.

Castro terminated five of Knight's pregnancies while in captivity. Knight did not address the abuse she suffered in detail in her statement, but she suffered "the longest and most severely," according to Frank Ochberg, an expert in trauma science.

"The death penalty would be so much easier. You don't deserve that. You deserve to spend life in prison. I can forgive you, but I will never forget," Knight said.

Castro faces life in prison, a plea deal he took in order to avoid the death penalty. He will serve life "plus not less than 1,000 years consecutively to follow life without parole," Judge Michael Russo told him.

"Writing this statement gave me the strength to be a stronger woman, and know that there's good -- there is more good than evil...After 11 years, I am finally being heard, and it's liberating," Knight said.