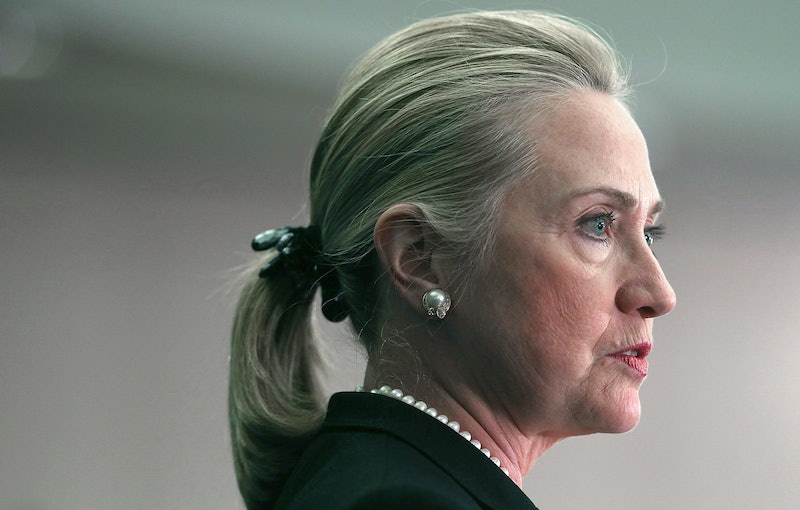 By now, you've likely heard about the Supreme Court's decision made on Monday in the Burwell v. Hobby Lobby case. If not, we'll catch you up - SCOTUS ruled in Hobby Lobby's favor, essentially allowing any corporation to opt out of providing contraception for employees if it goes against the corporation's owner's religious beliefs. That's right — the way the bosses feel about birth control and abortion could dictate whether millions of women have affordable access to contraception. Although providing birth control for employees was once mandated through the Affordable Care Act, this decision is protected under the Religious Freedom Restoration Act.

In the 5-4 decision, three female justices and one male justice dissented, while five male justices ruled in Hobby Lobby's favor. Justice Ruth Bader Ginsburg called this a "decision of startling breadth," and alleged that the SCOTUS is more concerned with the religious views and rights of owners of corporations rather than the rights of the female employees. In her epic dissent, she wrote:

Since the decision Monday morning, politicians, public figures, and celebrities have sounded off on the issue...

The former Secretary of State, who's been touring the country for several weeks to promote her memoir Hard Choices, blasted the Supreme Court's Hobby Lobby decision during an interview at the Aspen Ideas Festival. "I disagree with the reasoning as well as the conclusion," she said. "I find it deeply disturbing."

Clinton elaborated on the issue to moderator Walter Isaacson.

Part of the reason I was so adamant about including women and girls [in State Department efforts] is that they're often the canaries in the mine. It is a disturbing trend that you see in a lot of societies that are unstable, anti-democratic, and prone to extremism. Women's bodies are used as the defining and unifying issue to bring together people — men —to get them to behave in ways that are disadvantageous to women but prop up rulers. ... Many more companies will claim religious beliefs. Some will be some sincere, others maybe not. We're going to see this one insurable service cut out for many women. This is a really bad, slippery slope.

The Senate Majority Leader from Nevada released a statement on Monday following the Hobby Lobby decision in favor of women's rights and the ability to make health decisions.

Today's decision jeopardizes women's access to essential health care. Employers have no business intruding in the private health care decisions women make with their doctors. This ruling ignores the scientific evidence showing that the health security of millions of American women is strengthened by access to these crucial services. If the Supreme Court will not protect women's access to health care, then Democrats will. We will continue to fight to preserve women's access to contraceptive coverage and keep bosses out of the examination room. Under Obamacare, more women in American are gaining access to quality, affordable care. women are no longer discriminated against or charged higher premiums for simply being women. Millions of women in America, and thousands in Nevada, have gained access to free preventive care, like contraception, that was not available to them before. The bottle line is that today's decision is wrong for women. Your boss should never be able to make your health care decisions for you.

The House Speaker released a statement on Monday in favor of the decisions. Surprising, right?

Today's decision is a victory for religious freedom and another defeat for an administration that has repeatedly crossed constitutional lines in pursuit of its Big Government objectives. The mandate overturned today would have required for-profit companies to choose between violating their constitutionally-protected faith or paying crippling fines, which would have forced them to lay off employees or close their doors. The plaintiffs in the HHR Mandate cases before the Court based their claims on the Religious Freedom Restoration Ace (RFRA), which passed Congress nearly unanimously in 1993. RGRA is a critical check on federal power and enjoys support across the ideological spectrum. The president's health care law remains an unworkable mess and a drag on our ecomony. We must repeal it and enact better solutions that start with lowering Americans' health care costs.

The House Minority Leader sounded off on Twitter about Hobby Lobby.

Plus, a few celebrities chimed in on Twitter about the Hobby Lobby decision.

In an Op-Ed published on aljazeera.com, the actress and political activist writes that the Supreme Court's decision will have lasting consequences for women around the world.

In the developing world, lack of access to contraception is a health crisis affecting 222 million women and girls. Every two minutes, a woman dies of pregnancy-or childbird related complications. The unmet need for contraception is a social and economic crisis as well. Young mothers usually cannot go to school, carrying the cycle of poverty forward to the next generation.

Judd also writes that assistance for expecting mothers in the U.S. has been under the gun for years.

Only two cents of every development dollar goes to support programs for girls, such as those that provide access to contraception. This, even though evidence shows that every dollar invested in contraception saves $4 in other areas, such as education, public health and water and sanitation.

Judd, who works as a board member for Population Services International, says she is concerned that his recent decision will "give rise to a newly invigorated round of restrictions on access to contraception everywhere."

It is time to lift the controversial veil from the word "contraception" and put the issue squarely where it belongs: at the center of the global health, economic, environmental and human rights agenda. In doing so, we will give women in every country the opportunity to become the next great leader, doctor, mom or teacher - wherever their dreams lie. We simply cannot let this Supreme Court decision set the clock back even further.