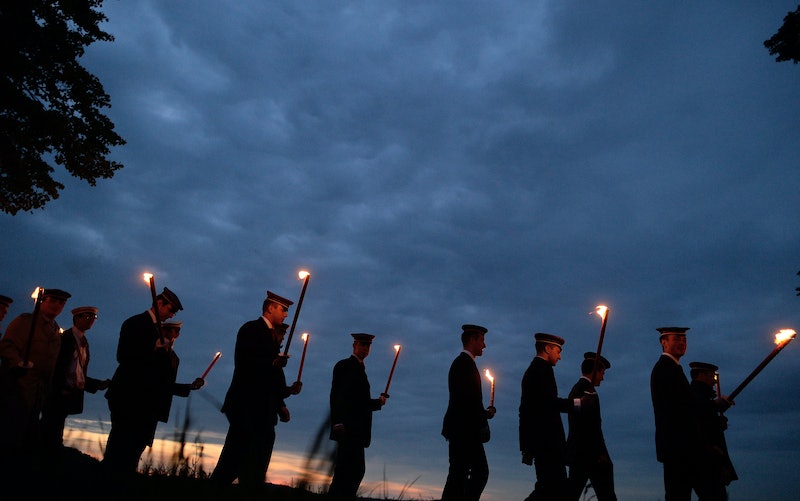 There's a new identity politics group on the scene and, if you haven't heard, they're the "Men's Rights Activists" (MRAs). These men are mostly divorced fathers or sperm donor "dads" who perceive themselves to have gotten screwed by the legal system. And they're bravely sticking up for the rights of men to abandon their biological offspring, mostly via insular discussions on the Internet. But take notice: these activists have reached new levels of legitimacy as of last week, because the MRAs held a conference !

The International Conference on Men's Issues held its inaugural meeting in Detroit at the end of June, with about 200 participants in attendance. The event, sponsored by men's rights publication A Voice For Men, was supposed to have been held at a local hotel, but the venue apparently declined to host after the conference received threats from feminists, and it was held at a Veterans of Foreign Wars facility instead.

Topics discussed at the event will surely take your feminist sympathies for a ride. Disappointingly, MRAs tend to discuss the issue of rape (especially rape on campus) with precious little subtlety: all cases of non-forcible rape must just be "buyer's remorse." On the other hand, the MRAs also discuss things like the ineptness with which men tend to be portrayed in pop culture (e.g. the "dad is terrible at chores, isn't that adorable!" tone of many commercials for home goods). And that sort of thing is practically ripped from the pages of feminist sociologists' own books.

So, I don't mean to come across as too dismissive. Some individual MRAs have indeed suffered trauma and injustice when it comes to gaining equitable custody of their children, or having gotten taken for a ride financially when a child of "theirs" was conceived via deceit on the part of a woman. But, like any semi-academic enterprise, the MRA movement as it grows will face the challenges of reconciling its crazier arms (which fail to argue well, and in good faith) with its more serious contingent.

I'll note that feminism faces this challenge too. It's a messy process, but knowledge and policy will hopefully be the better for it. And please for crying out loud, don't any of you feminists disruptively crash the MRA conferences in the meantime. Just think of the Internet outrage that would ensue, had the MRAs done that to you!