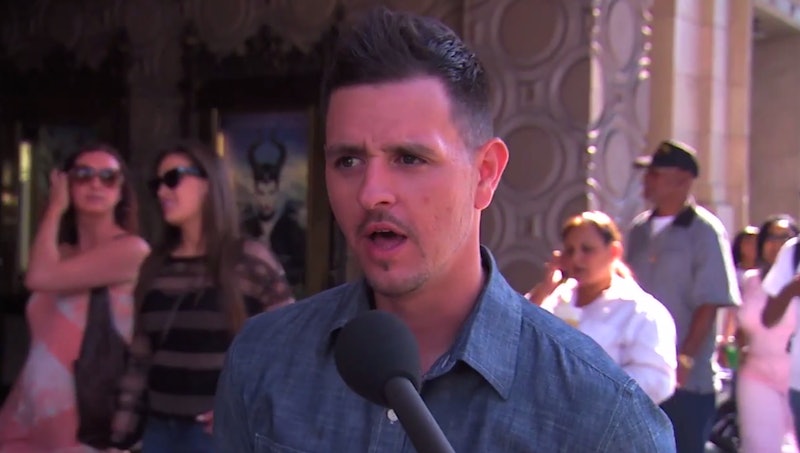 There are only a few things that can perk me up on a Wednesday morning and, apart from the majority of them have to do with coffee (Iced coffee, espresso, Americano, an I.V. drip of coffee, you name it), a new clip from Jimmy Kimmel Live! 's Lie Witness News skit involving World Cup U.S. soccer fans is one of them.

If you're not familiar with the concept, it involves Kimmel sending his staffers out to Hollywood Blvd., apparent congregating site of liars, and asking them a question about a major current event — soccer, a concert, politics, Justin Bieber, whatever — but slightly altering the truth, just to see if the interview subject goes along with it so as not to seem clueless in front of a camera. Without fail, people lie through their teeth about everything. Look, here's one about people talking about Godzilla being based off of a true story, even though anyone with a 5th grade education should know it's fiction. And here's one involving self-proclaimed Miami Heat fans talking about the team...and their defense techniques apparently named after Game of Thrones houses. Here's one where people attending Coachella rave about the new bands playing at the festival that the interviewer mentions — except none of them are real.

In this clip, the set-up is quite similar: U.S. soccer fans are asked about an "amazing goal" that player Landon Donovan made during yesterday's U.S./Belgium game (which the U.S. sadly lost) — except that goal never happened, because Donovan was cut from the team shortly before the World Cup actually started. That didn't stop these people from raving about it, though!

Check out the clip below. Honesty is always the best policy, guys, remember that.

More like this
Lewis Hamilton Turned Down A Role In 'Top Gun: Maverick' For This Surprising Reason
By Darshita Goyal
What Is Ben Affleck's Net Worth? At 50, The Oscar Winner Makes 8 Figures Per Film
By Meg Walters
Someone Must Pay For What Happens To Bad Bunny In 'Bullet Train'
By Arya Roshanian
Christina Perri Had No Idea Her 'Twilight' Song Is On YouTube's Top 100 Chart
By Radhika Menon
Get Even More From Bustle — Sign Up For The Newsletter