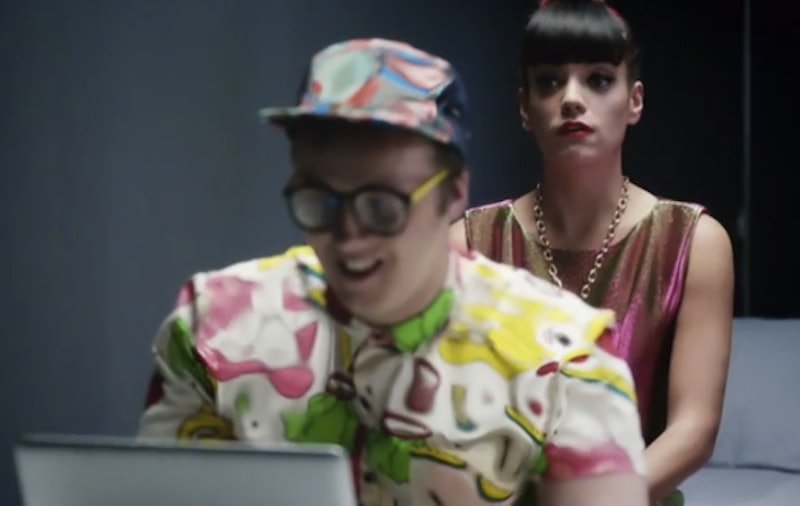 When Lily Allen released her single "Hard Out Here," she received a lot of hate from commenters on the Internet. Naturally, she imagined that these evil commenters were the prototypical white male hipster living in their mothers' basements, the type who has nothing better to do than insult other people, and maybe jerk off every now and again. The always-outspoken Allen wanted to call them out for their behavior, so, enter the song and video for Allen's "URL Badman."

I wrote that after I put out the video for "Hard Out Here" and everyone said I was racist. I was really alarmed by that reaction. I stand by that video and I know what my intention was and I'm sorry that people interpreted it in a different way. A lot of that negative stuff came from females and the feminist blogger scene. What really pissed me off was the misogynistic, hipster, male bloggers that went after me in a completely different way. And I just thought, "Fuck you, I'm going to write a song about you."

In the song, Allen paints a portrait of someone who claims that he doesn't "troll, [he makes] statements," who, in her first-person mock-autobiography, also describes himself as:

Spectacles with no prescriptionShort-shorts with convictionSupreme palace, APCSizzurp in a chalice, yeah, that's so meI'm a London white boy rapping ATLKeyboard Warrior that can't spellI don't like you, I think you're worthlessI wrote a long piece about it up on my WordPress

Yeah, Wordpress — getting a shout out in a pop song! Allen name-checks throughout the tune while she satirizes nasty anonymous commenters who wish they were bloggers, but the point isn't the A$AP and Kanye references (or the Vice or Complex shout-outs, for that matter)— it's that she's takin' down the trolls by getting on their level.

Prospective commenters might want to know that Allen said in the aforementioned Rolling Stone interview that she doesn't read comments on articles or blog posts anymore, and she only reads YouTube comments for the first 48 hours that the video is up.

You can check out the video for the fourth single off of her latest album Sheezus, below: