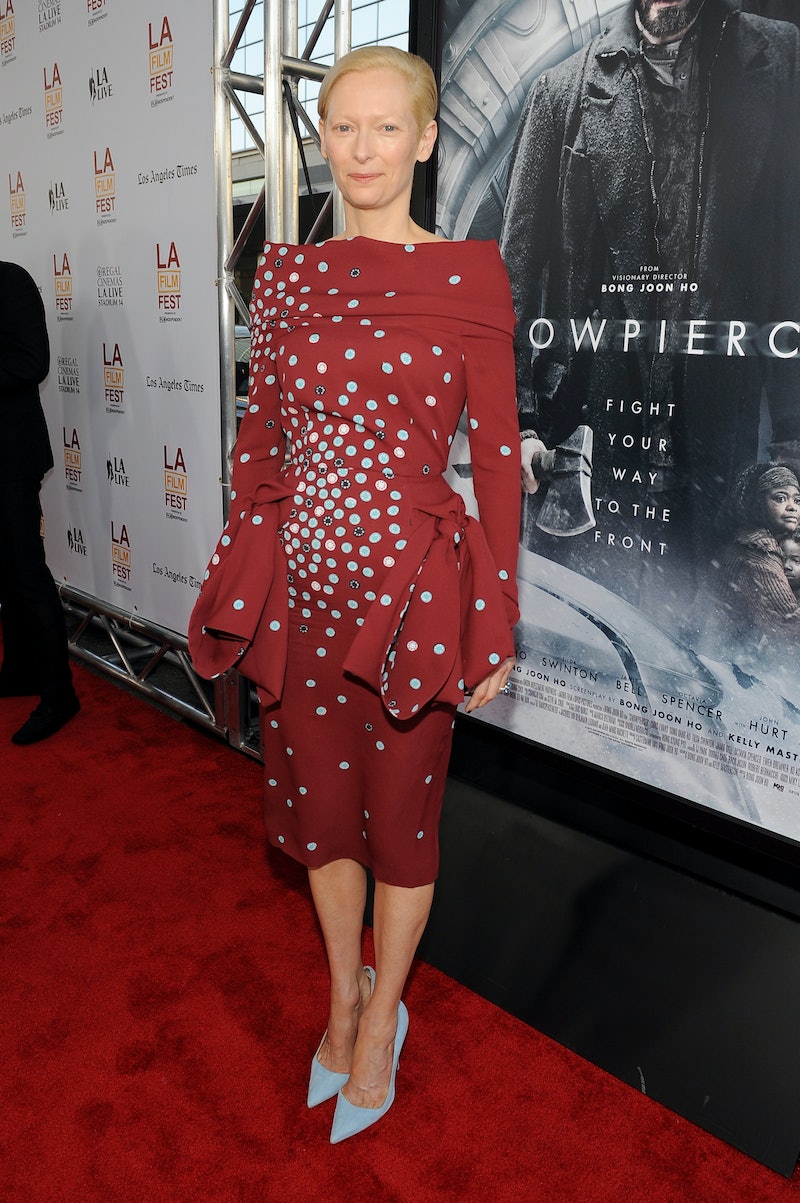 Acclaimed director Bong Joon-ho's long-awaited dystopian sci-fi thriller Snowpiercer finally expands to more theaters nationwide this weekend and the buzz from critics and fans alike has been louder than a speeding train. Snowpiercer — which is based off the 1982 French graphic novel Le Transperceneige — tells the story of Earth's remaining survivors after a man-made ice age, who now live on a perpetual motion train. And while the film's eye-popping visuals, beautiful, but violent action sequences, whip-smart script, and excellent performances from the entire cast (including Chris Evans, John Hurt, and Octavia Spencer) make this one of the year's best films, the real star of the show here is Academy Award winner and art instillation come to life, Tilda Swinton.

Practically unrecognizable in thick-framed glasses and fake teeth, Swinton plays Minister Mason, one of the "front of the train" patrons who keeps the strict and horrifying order set forth that separates the "back of the train" patrons, who live in ungodly conditions. She is unrelenting in her evil as a henchwoman for the mysterious Wilford (played by Ed Harris), the man who runs the train. She doesn't flinch at the barbaric orders to punish the "back of the train," nor does she question any of Wilford's authority, especially when members of the back (lead by Evans) begin to revolt and chaos ensues.

That said, even though she plays a villain, Swinton also delivers one of the funniest on-screen performances all year. The menacing, bizarre Mason almost feels like something dropped out of a deranged political cartoon strip that happened to find its way into this blood-soaked sci-fi masterpiece. And only the fearless, constantly-evolving Swinton (seriously, has she ever looked or sounded the same in any of her movies?) could pull it off with such flying colors.

The audience I saw Snowpiercer with in a jam-packed Manhattan theater last Saturday ate up every minute of Swinton's intentionally hammy/sinister performance. The sign of a great movie villain is one you want to continue watching, no matter how much you know they deserve their comeuppance. You have about a million things to absorb during Snowpiercer, but Swinton manages to grab all of your attention whenever she's on screen.

Snowpiercer has something for audiences sick and tired of the same mindless summer blockbusters. It is sleek, beautiful, terrifying, surprisingly hilarious, wildly imaginative, violent, smart, and haunting. The kind of movie that sticks with you for quite some time. The same goes for Swinton's performance. You'll alternate between chuckling and picking your jaw up off the floor when you watch her, but mostly you'll just hope that the Academy remembers her around Oscar season. It's fitting that a one-of-a-kind movie like Snowpiercer features the one-of-a-kind Tilda Swinton, because the whole thing is match made in far-out movie heaven.