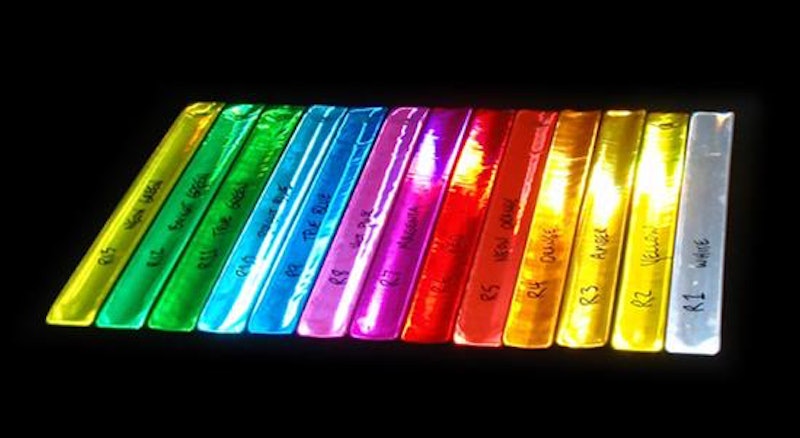 It's a well-known fact that in a world of bells, whistles, and multicolored baubles, children will often reach for the simplest toys. They'd rather play in a refrigerator box than have the latest KRE-O CityVille Invasion Dr. Mayhems Jewel Heist; they'll spend longer in a puddle of mud than they will with Barbie. When it comes to kids, the allure of simple things cannot be overrated, and the slap bracelet is a perfect example of this. It shouldn't be fun — it's only a bracelet that snaps around your wrist — but when you're a kid who's just becoming interested in trends, it's addicting.

The slap bracelet was invented in 1983 by a high school shop teacher from Wisconsin named Stuart Anders. According to the New York Times, Anders was in his father's shop, playing with a steel ribbon, when the million-dollar idea slapped him on the wrist. The original slap bracelets were marketed as "Slap Wraps," and they consisted of a long piece of steel — similar to a steel tape measure, or Venetian blind material — covered in fabric. The steel then curved into a bracelet shape when it was slapped over an unsuspecting wrist. When Main Street Toy Co. began to sell the bracelet to school kids, Slap Wraps quickly grew in popularity, hitting the '90s hard, literally.

Like a simpler version of the '90s tattoo choker, the slap bracelet had two faces. It wasn't just a toy that could be extended and reformed, it was a serious fashion statement — perfect for kids on the cusp of childhood and adulthood, standing between the pre- and post-Internet eras. '90s kids liked their toys fashionable and their fashion playful, and slap bracelets gave them exactly that.

Unfortunately, where childhood crazes go, the worried parents follow. When a four-year-old girl cut her finger on the sharp metal edges inside a cheap imitation slap bracelet, the Connecticut Department of Consumer Protection recalled all knock-off Slap Wraps. After more reports of slap bracelets gone wild came pouring in, the bracelets were also banned by schools in the state of New York. Apparently the knock-off versions, which were coming over from Asia, were made of cheaper fabric and low-grade steel with sharp edges that could rust and wear through the fabric. Since snap-wrap addicted kids were also snapping the bracelets around their friends' ankles, necks, and anywhere with a prominent vein, it seemed prudent to call a halt to the craze.

But that's not the only dark secret in the slap bracelet's past. In 2011, elementary school students in Florida earned a big batch of slap bracelets as a reward for their fundraising efforts. But instead of purchasing the original Slap Wraps, school officials opted for cheaper Chinese versions. And once the fabric started wearing or tearing off those knock-off versions, the students found nude pictures printed on the metal underneath.

Parents freaked out for the second time in the snap bracelet's short history; the nudie bracelets were recalled; and Stuart Anders, the inventor of the Slap Wrap himself, sent the traumatized (and giggling) students a new batch of certified original Slap Wraps. He even included a letter, in which he rhapsodized about the power of imagination:

My time as a child was spent building forts from grass and branches; cutting and gluing wood pieces together to make presents for my family; and drawing and coloring on everything I could get my hands on. Nothing has changed for me. I still create new things every day. I'm excited about life and all of the new things I know my mind will think of — things that no one else has ever thought about or has ever made before.

Like all good antagonists, the snap bracelet simply will not die. The latest? In 2013, Apple filed a patent for a "bi-stable spring with flexible display" for what many suspected was their rumored work-in-progress, the iWatch. "The most recent widespread use of such a device was the slap bracelet, also called the slap wrap," wrote Apple in the patent. Looks like your latest gadget won't be fastened about the wrist, it will be slapped, just like your inner kid hoped.